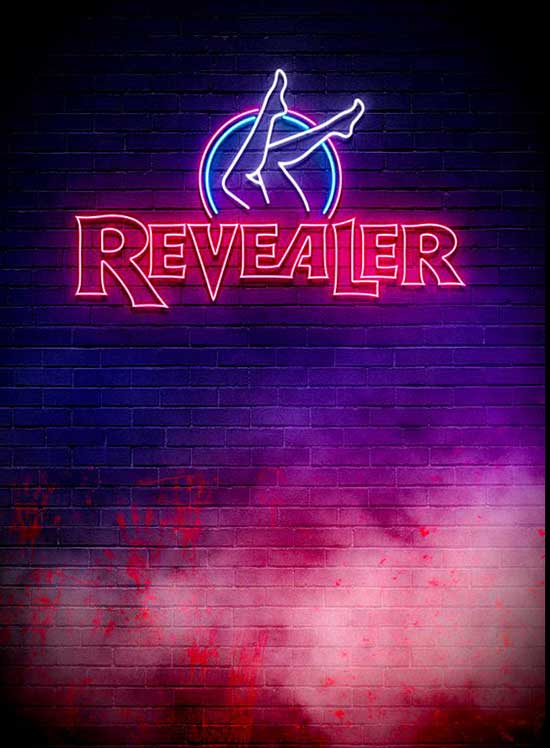 Tensions rise when a stripper and religious protestor are trapped together in a peep show booth and must come together to survive the apocalypse in the 1980’s Chicago.

This will be the first film, I’m officially reviewing for Panic Fest 2022, and I’m SO EXCITED. Revealer was directed by Luke Boyce, and written by Luke Boyce, Michael Moreci, and Tim Seeley. I LOVE the colors, the scenes, the writing, it reminds me of The Guest, a comic book, warped, gnarly, awesome version of The Guest. I mean COME ON!!!

The film opens with one of those TV preachers, he’s asking for money, you know to save our souls and stuff. The TV preacher arrives in what looks like it could be hell. He “judges the wicked.” Asmodeus portrayed by Phil Bogdan. Asmodeus is known as the “demon of lust” according to Google of course.

Now we meet Angie portrayed by the awesome Caito Aase. She is a bad ass. Sally (Shaina Schrooten) is trying to save Angie, and everyone else out there. Bishop Steves plays Ray, the owner of the Peep Show Booth. Ray and Angie’s banter back and forth is funny. Angie is getting ready for her show in the booth.

Angie performs while Sally attempts to pass out fliers to save some souls. The song choices, the colors in the film are vibrant. It’s set in the eighties, so the references and the random objects like the cassette player, the spandex.

There’s a wild lightning storm and the rapture is coming, wait, is this the 1980’s or 2022? Angie is trapped in the Peep Show Booth with… Guess… Guess, go ahead, I’ll wait…. *Plays Jeopardy music*… Sally knows it’s the end of times and Angie needs help. These two are totally different, and it’s good to see two women who may be different but it’s not completely catty bullshit.

After a conversation, some frustration, they start working together so they can get out of the mess their in. What a mess indeed. Oh, the eighties, it was copasetic, tripindicular, and mackadocious. Sally gets to do some bad ass stuff too.

We meet Asmodeus (Phil Bogdan), the demon of lust. A Red Dawn mention, and a potential Terminator reference. That was rad. David is portrayed by Sammy DelPurgatorio. Sally and Angie make their way through the tunnels under the Revealer shop. Asmodeus is messing with Angie and Sally. The wild demon snake things are crazy. It’s definitely like watching something from an eighties monster or creature movie. Asmodeus comes floating up. Angie and Sally are still trying to get away.

Revealer is a great film. Luke Boyce, Michael Moreci, and Tim Seely did a good job. They created something original, and refreshing. Sally is holding on to a secret. It seems women still didn’t move past that whole thing about still being told to “smile more.” Sally has a secret she had to keep for a while, she does wind up telling Angie, even though Angie knew.

People are always quick to judge others. They pick and judge relationships, friendships, they judge how people dress. Imagine if people actually got along and genuinely were happy for one another. The world would be such a different place. No jealously, judgement or hate.

I loved the plot and the music. Aaron B. Koontz was one of the producers, his films are always great. There is a lot of talent involved with Revealer. It felt like the eighties. This was cool that Revealer was the first film I got to review for Panic Fest 2022. I’m excited for the festival, and I hope everyone is.

The ending is good. Make sure to watch the ending, the imagery and shots are just mind-blowing. It’s like they brought forth another universe, it’s wild.

Make sure to check out Revealer, and Panic Fest 2022.

Ranking ‘The Walking Dead’ Villains, From Worst to Best