‘They/Them’ Is Creepy and Gay, But Not Really A Slasher [Review] 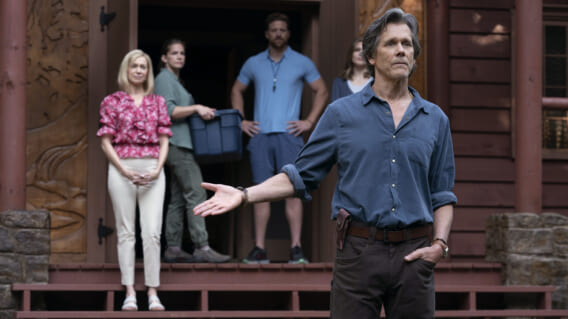 John Logan’s new film They/Them is so wonderfully gay. With his directorial debut, Logan is trying to right the many wrongs the horror genre has leveraged against the queer community. And while he is mostly successful, his attempt to make a traditional slasher is overshadowed by a much scarier narrative about the struggles of just existing as a gay person.

The Whistler Camp is an LGBTQIA+ conversion camp run by Owen Whistler (Kevin Bacon) and his wife (Carrie Preston). With two counselors and a doctor on staff, young adults arrive each summer to be “cured” of their gayness. The latest “class” of campers arrive and discover a seemingly normal camp with obviously sinister intentions. But, Owen confuses them. He isn’t preaching the word of the Lord or bashing them over the head with homophobia. He’s actually strangely kind and understanding, taking many of them by surprise.

As the week progresses, a masked stranger lurks in the camp’s shadows and begins to kill counselors and campers alike. As tensions rise, the campers and staff alike struggle to decide who they can trust as the body count rises.

Also Read: ‘All Jacked Up And Full of Worms’ Is A Nasty, Disturbing Nightmare [Fantasia 2022 Review]

While They/Them has been primarily marketed as a slasher film, don’t go in expecting a full-on gore-fest. Instead, the primary horror of They/Them lies in the violence of homophobia and white supremacy. Much of the plot focuses on the campers getting to know each other and the abuses that slowly reveal themselves. Toby (Austin Crute) is screamed at to shoot a gun at a live target. Alexandra (Quei Tann) is outed as a trans woman and forced to stay in the boy’s cabin. These campers are constantly under verbal attack, systematically broken down and manipulated. The moments featuring the masked killer are few and far between until the film’s final minutes, which will leave slasher fans scratching their heads. These plot points feel haphazardly thrown in, afterthoughts to make sure there’s something more marketable for wider audiences.

Along with the struggle to create a consistent slasher film, They/Them‘s script also struggles with the characterization of Jordan (Theo Germaine) who’s meant to be our lead. They’re set apart as different from the get-go as they declare they’re nonbinary and cheekily ask “you don’t have any all-gender cabins, do you?” They quickly stand in opposition to everything Whistler stands for and are set to be our hero. But, not much else is done to establish who Jordan is. Yes, some vague background story is provided about why they’re here and their upbringing, but not enough to become fully emotionally invested in their journey. That’s because Logan is trying to spread the love across the cast and have them all feel fully formed rather than just props for Jordan’s development.

And for the most part, this is successful. You really care about all of these campers and their individual journeys. Veronica (Monique Kim) is bisexual and hates herself. Alexandra just wants to be able to see her siblings again. Stu (Cooper Koch) is full of internalized homophobia. Everyone has their own experiences and aren’t reduced to general ideas of gay trauma. Yet, in spreading the attention across the cast, Logan loses sight of his lead and creates an uneven narrative. He wants to allow room for as much representation as possible, which is admirable, but inevitably trips up in his own desire for said representation.

With They/Them, Logan doesn’t want to revel in queer pain and reduce queer characters to stereotypes. Instead, Logan wants to make something terrifying yet revelatory, a reframing of how queerness fits into the most traditional horror tropes. While execution is clunky at times, especially when it comes to creating our main protagonist, They/Them helps to pave the way for the commercial future of queer genre filmmaking. Logan uses a predominantly queer, and incredibly diverse, cast to tell a story about found family, survival, and the horrors faced by the queer community on a daily basis. They/Them isn’t perfect, and it’s not really a slasher, but it’s what the horror world needs right now. It’s what younger queer horror fans need to feel seen in the genre. It’s a film I wish I had as a baby queer. But we have it now and that’s all that matters.

They/Them comes to Peacock on August 5.

While ‘They/Them’ is mostly successful, John Logan’s attempt to make a traditional slasher is overshadowed by a much scarier narrative about the struggles of just existing as a gay person.

The Story Behind the Rock + Metal-Loving, Singing Mr. Chicken

The 13 Prettiest Autumn Nail Colours to Try in 2022