It’s been three long years but Ed Sheeran is back atop Billboard’s monthly Top Tours chart with a $60 million-haul from 12 shows in June. According to figures reported to Billboard Boxscore, the English troubadour’s Mathematics Tour grossed $63.8 million and sold 750,000 tickets throughout the month.

After a soft launch in a smattering of theaters and clubs in Dublin and London, the tour properly began on April 23 with two nights at Dublin’s Croke Park, hitting stadiums throughout Ireland and the U.K. each weekend since.

Sheeran’s June shows were highlighted by a multi-weekend run at London’s Wembley Stadium, earning $37.2 million from 420,000 tickets over five nights, the highest Boxscore total by any artist so far in 2022. (These shows are No. 1 on June’s Top Boxscores chart with $29.3 million and 331,000 tickets. The final performance on July 1 will count toward the July charts.) 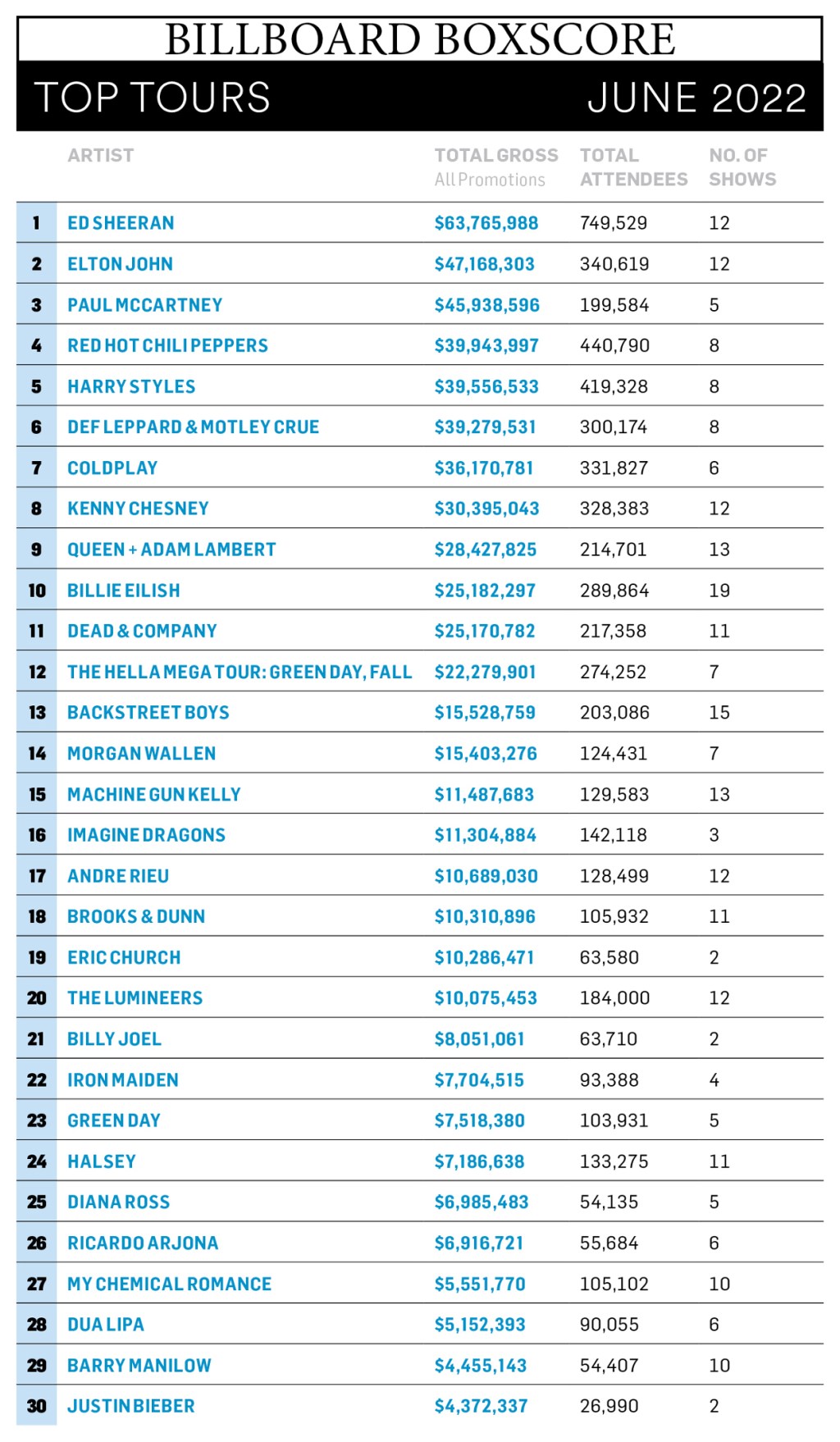 That five-show run improves upon his last trip to Wembley, up 3% in per-night grosses from his four-show haul in June 2018. But after months of surging Boxscore grosses due to inflamed ticket prices in North America, Sheeran’s gassed-up grosses come despite a dip in average ticket prices from $96 in 2018 to $83 on his recent London shows. He’s simply selling more tickets than on his record-breaking The Divide Tour, moving an average of 89,000 tickets each night in London, compared to 75,000 on his previous run.

Sheeran’s moderate pricing is due to two things: the artist and the location. Sheeran himself was conscious of maintaining affordable tickets during The Divide Tour, setting sub-$100 stadium prices and enacting on-site anti-scalping measures. And despite a surge via dynamic pricing and VIP lifts in the U.S., prices in Europe have remained comparably modest, markedly lower overseas for Dua Lipa, Billie Eilish, and despite an upgrade to stadiums, Elton John.

Wembley Stadium would have been No. 1 on Top Stadiums from just the four Sheeran shows but ensured its monthly victory with two additional Harry Styles dates on June 18-19. Altogether, the venue grossed $43.8 million and sold 478,000 tickets in just six shows from the pair of British hitmakers.

Styles’ double-header in London takes the No. 6 spot on Top Boxscores and his entire eight-show spree in June places him at No. 5 on Top Tours with $39.6 million, packed between the Red Hot Chili Peppers’ $39.9 million and Def Leppard & Mötley Crüe’s $39.3 million at Nos. 4 and 6, respectively. 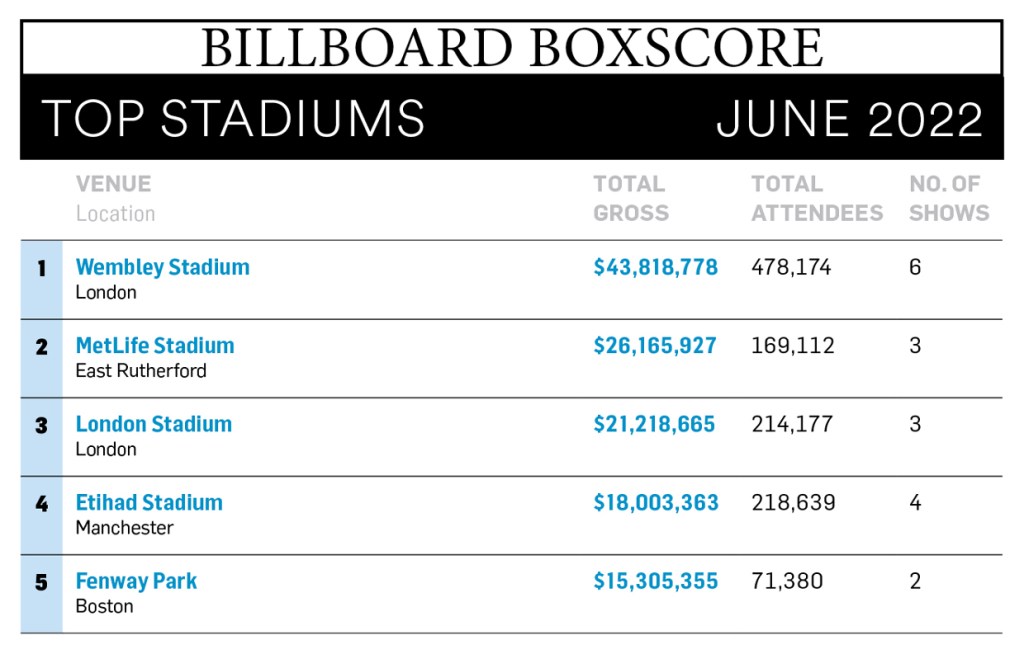 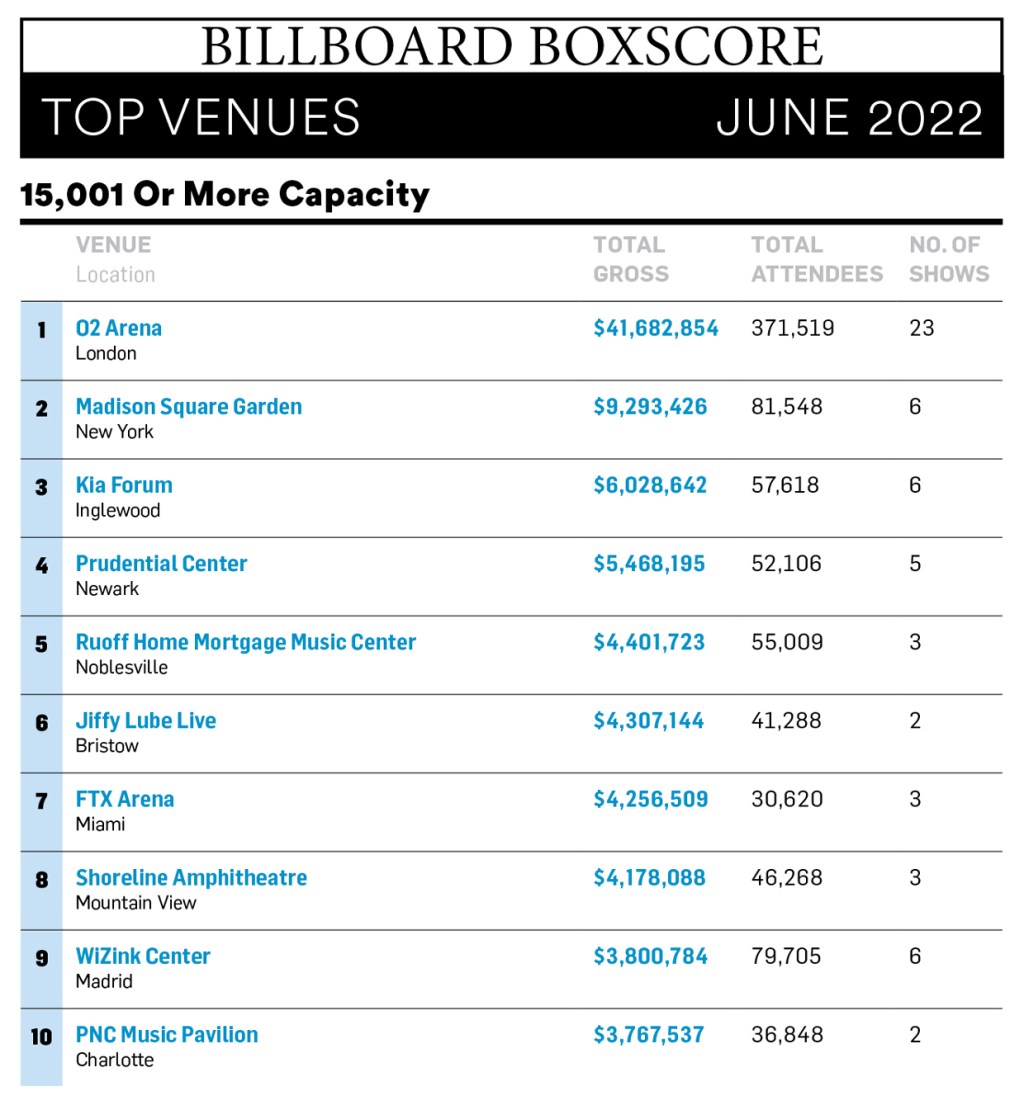 Over on the Top Venues chart for rooms with a capacity of 15,001 or more, London repeats with the O2 Arena at the pole position. Not only is the legendary hall at No. 1, it leads its next closest competitor, New York’s similarly iconic Madison Square Garden, by an eye-popping margin of 4.5 to 1.

The arena’s $41.7 million monthly total is the highest one-month gross for an arena since the launch of Billboard’s monthly Boxscore recaps in early 2019, surpassing MSG’s $27.3 million gross in February. Further, it’s the third-highest monthly total for any venue, after two showings by Wembley Stadium ($47.7 million in June 2019 is the all-time high, followed by its $43.8 million take this month). 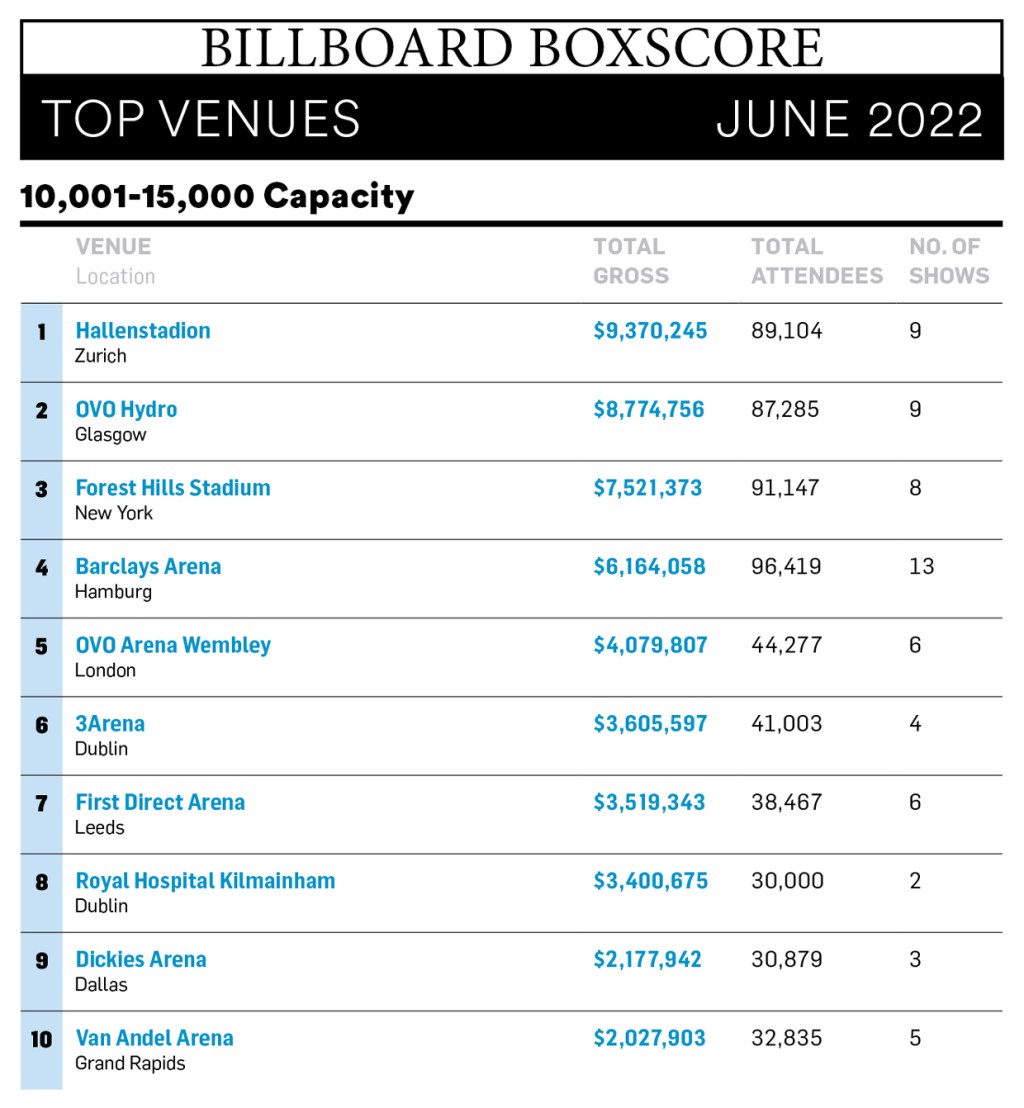 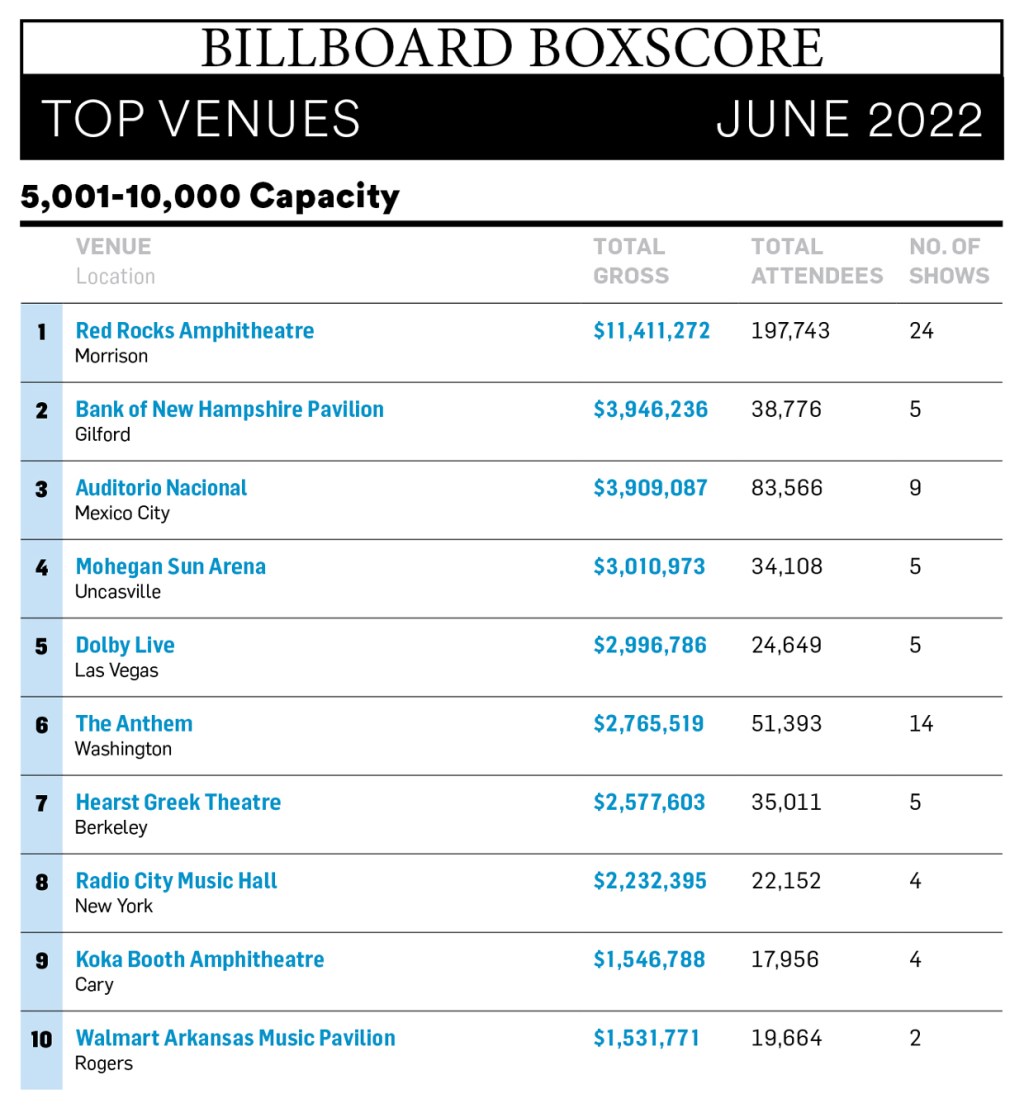 London occupies half of the top 10 of Top Boxscores, scoring a fifth appearance via the Chili Peppers at No. 5. The rockers earned $14.7 million from 142,000 tickets on June 25-26 at London Stadium.

In more stadium news on Top Boxscores, MetLife Stadium in East Rutherford, N.J. is at Nos. 7-8 with Coldplay (June 4-5) and Paul McCartney (June 16), respectively. Both Brits grossed more than $13 million at the New York-area venue, making it the third venue to double-up in the top 10. Overall, MetLife is No. 2 on Top Stadiums with a $26.2 million gross from the three shows.

In addition to Coldplay and McCartney, Kenny Chesney represents for North American tours, bringing in $30.4 million at No. 8 on Top Tours. His Here and Now Tour launched on April 23, rescheduled from its original 2020 routing. In any other month, Chesney would be comfortably in the top five as there have never been more than four $30 million tours in one month, led by P!nk in July 2019.

Even deeper down the chart, the saturation of big earners continues. There are a record 12 $20 million tours, surpassing the previous high of nine (March 2022). 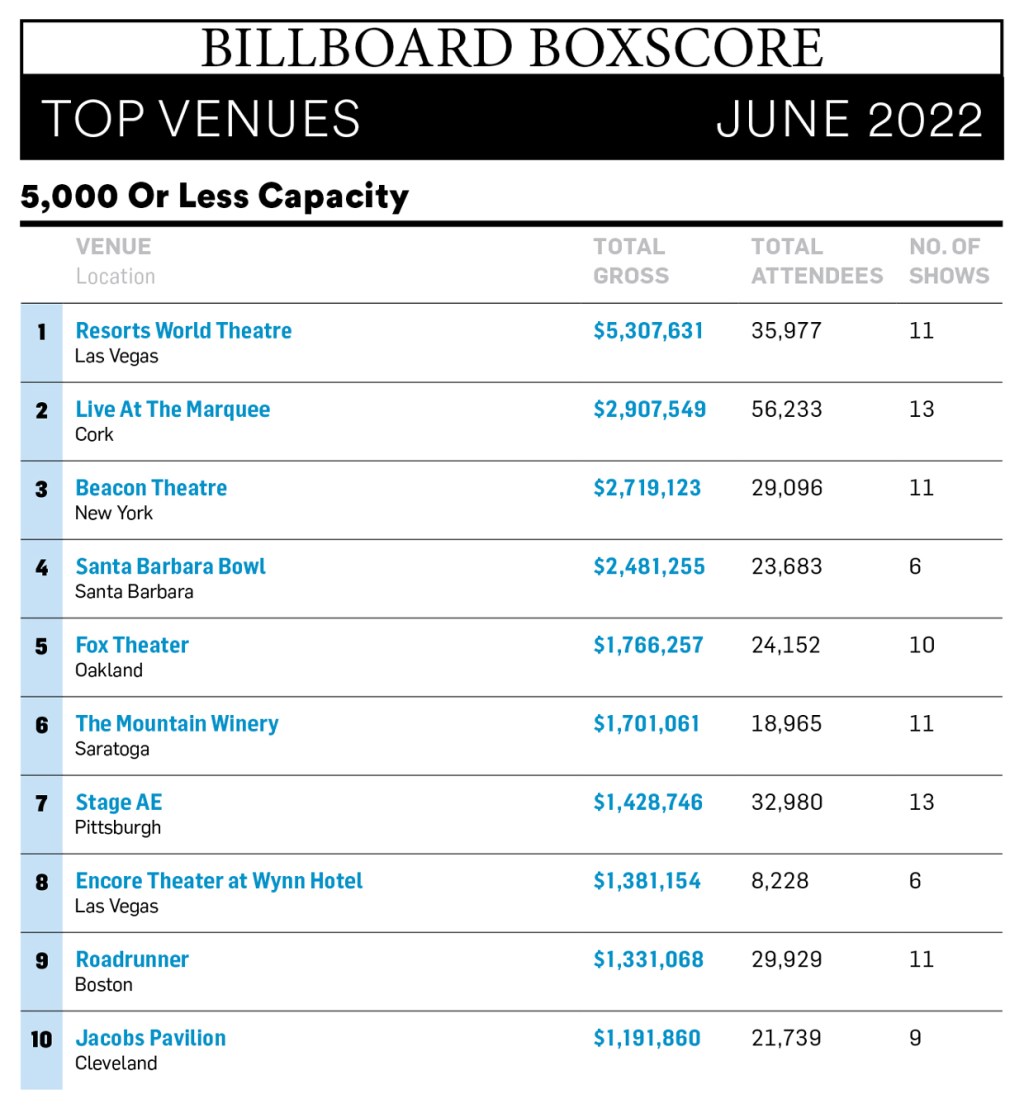 Sima's Back to Work in First Season 2 Trailer (VIDEO)

Answer the door, it’s the first trailer for M. Night Shyamalan’s Knock at the Cabin