‘Rings of Power’ Episode 6: Morfydd Clark on Galadriel and Halbrand

The following contains spoilers from Episode 6 of Rings of Power. Proceed accordingly.

A catastrophic volcano eruption at the end of this week’s The Lord of the Rings: The Rings of Power sent Southlanders and Númenóreans scrambling for cover, but the elf commander Galadriel stood her ground. Her preternatural stillness despite the chaos around her wasn’t so much bravery as it was a moment of complete and utter defeat.

“She was just utterly spent and so exhausted and so regretful, that she is completely immobilized and almost is kind of grateful to have a moment of peace,” Morfydd Clark, who plays Galadriel, tells TVLine. “I think she’s just utterly paralyzed by guilt, fear, rage, and thousands of years of it.”

Galadriel’s brother Finrod died during the elves’ war with Morgoth over a thousand years before the events of Rings of Power, and she has dedicated her life to eradicating any remnants of the Dark Lord’s evil presence ever since. It’s why she leapt into the Sundering Seas rather than return to the elven haven of Valinor, and how she ended up in the company of the mysterious Southlander Halbrand (played by Charlie Vickers).

They may have started off as reluctant allies, but Episode 6 made it clear that the pair shares a special bond. During the hour, Halbrand revealed that he felt free fighting alongside Galadriel, and she confirmed that she felt it, too. If you’re thinking the vibes are strong between these two, you’re not just seeing things. 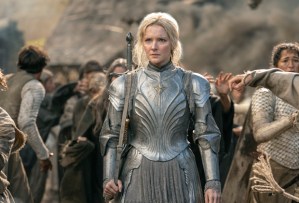 “With Galadriel, the problem is she feels more than just vibes. She feels massive, monumental galaxy shifts whenever she feels anything,” Clark shares. “Somehow, what she sees as a hopeless mortal that she found stranded at sea has forever changed her. It was really fun exploring how vulnerable this mythical being Galadriel could be. We spoke a lot about how we’d stage it, and both of us felt that looking at each other would even be just too intense. It’s, like, too much — whatever they’re feeling is too much.”

What’s also overwhelming? Dealing with an enemy like Adar, who knows exactly what buttons to push. It took all of her strength — and Halbrand’s urging — not to kill the orc leader when he compared her to Morgoth.

“I think what is just awful to her about Adar is that she despises him and everything he stands for, and yet he seems to see her more clearly than anybody else,” Clark explains. “That’s deeply uncomfortable for her.”

She adds that “what I really enjoyed about Galadriel in this part of it that we’re exploring is she’s so far away from the ethos of Tolkien. She is adrift from her community, she is isolated, and she is not aware of her limits, and he sees all of that.”

And what Adar saw most clearly was her obsession with Sauron. “She’s incredibly paranoid in a way, and rightfully so, because [Sauron is] all powerful, could be anywhere, could be anyone,” Clark explains. “Adar knows that, so he is playing with her because he can see her weaknesses.”

Meghan King Got Her Boobs & Nose Done – And She’s Sharing All!

Meghan King Got Her Boobs & Nose Done - And She's Sharing All!

'The Unknowable' Is New Cosmic Horror From 'The Den' Director

For The Next Thirty Days, Kanye West Intends To Abstain From All Things Sexy, Sexual, And Verbal

Would These Celebs Make Nice Neighbors

Bruce Lee Is Getting a New Biopic From Ang Lee