As The Voice concluded Season 22’s blink-and-ya-missed-’em Knockouts Monday, nine more acts saw their hopes of making the Lives wither and die before their eyes. Plus, a contestant who hadn’t really made an impression previously made it abundantly clear that she’s a force to be reckoned with. Which one? Keep reading.

Team Gwen: Justin Aaron performing “Can We Talk?” (Grade: A) defeated Cara Brindisi performing “Love Me Like a Man” (Grade: A) and Kayla Von Der Heide performing “Losing My Religion” (Grade: C+) | Up first, Cara looked 100-percent at home on her Bonnie Raitt cover, and she sounded like she was giving 200-hundred percent. Great range, saucy delivery and a vocal that went from gorgeous and seductive to raucous and raspy. Awe. Some. Following Cara was self-proclaimed shy guy Justin, coming way out of his shell to give a sweetly swagtastic performance that highlighted his smooth-as-silk voice and the enviable control he has over it. I thought Cara was gonna be unbeatable before I heard Justin — wow. After those two big performances, Kayla hit the stage and turned out a cool, understated rendition of R.E.M.’s hit that I kinda figured wouldn’t have gotten her enough votes to make it past the Live Playoffs. Neat idea, it just didn’t entirely come together, and her voice simply isn’t as ear-popping as Justin and Cara’s. 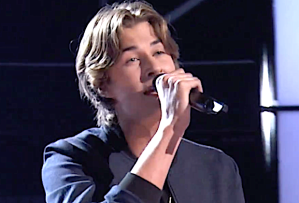 Team Blake: Brayden Lape performing “Mercy” (Grade: B+) defeated Austin Mongomery performing “You Look So Good in Love” (Grade: C-) and Eva Ullman performing “Dangerous Woman” (Grade: D) | When the spotlight fell on Austin, he wasn’t just hit-and-miss, he was more miss than hit. Though he was his usual classic-country self, nerves seemed to get the best of him, causing him to bungle what didn’t seem like the most challenging song ever. Definitely not Austin’s finest hour. Next up, Brayden, who I’ll admit hasn’t always wowed me, really delivered. His vocal was solid, gorgeous and surprisingly vulnerable Not much in the way of stage presence, but impressive nonetheless. Batting cleanup… oh, man, Eva was so pitchy, I was still cringing five minutes later. It actually would’ve been a kindness for her to have been montaged. As John pointed out, “It was a daring choice.” Just maybe not a dare that she should have taken. 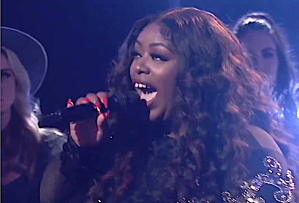 Team Legend: Kim Cruse performing “I Can’t Stand the Rain” (Grade: B+) defeated Emma Brooke performing “I Hope” (Grade: B-) and The Marilynds performing “Chasing Cars” (Grade: B) | First on stage, Kim, who in rehearsal told us, “They’ll see I didn’t come to play” most definitely did not play. She had a full-on diva moment, building and building her voice up from cool and smoky to massive and thunderous. Not super sure that the golden oldie was the best song choice for her — I wanted her to be able to let loose even more — but she seemed like she would be tough to beat. “Hold my beer,” said Emma. Not literally, of course. She started strong, then sorta weakened, then regained her footing. The trouble was, she sounded more “scholarly” than “emotional,” if that makes any sense. All technique, no feeling. Last up, The Marilynds sounded swell on their harmonies but a lot less compelling anytime either of them sang alone. Pretty stuff but not anywhere near as exciting as Kim (and what more we know she can do). 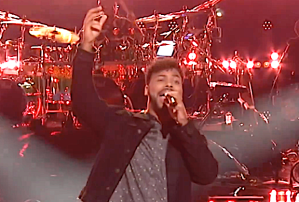 Team Camila: Devix performing “Yellow” (Grade: C+) defeated Andrew Igbokidi performing “Everybody Hurts” (Grade: B-) and Steven McMorran performing “It Will Rain” (Grade: B-) | Starting off the Knockout, Devix… aww. I really like him, but early on, it just didn’t sound like it was coming together; his high notes rose, just not always as high as he meant for them to go. This was just way off. Wrong song, sentimental as it may have been for him. Singing second, gee… I really like Andrew, too, and was rooting for him to overcome his nerves. But he looked like a deer in headlights and just felt flat. Not like the notes necessarily were, just the overall impression that he left. So much untapped potential there. Last in line, Steven kinda sang at 11 the whole time. But at least he seemed a little more in control of his vocal than his teammates. Honestly didn’t love any of these performances, but I’m glad that Camila kept Devix; he’s got “it” even if he didn’t bring it to the stage this time out. 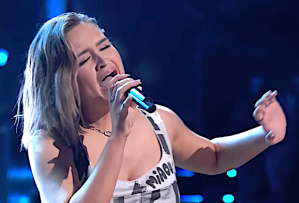 Team Gwen: Alyssa Witrado performing “Don’t Stop Me Now” (Grade: B-) defeated Sasha Hurtado performing “Make It Rain” (Grade: A) and Daysia performing “Get Here” (Grade: B-) — Sasha stolen by John | Stepping into the ring first, Alyssa started strong, and passed by strong now and then during her performance like she was waving hi to it. But she might have bitten off a little more than she could chew by opting to tackle Queen. Second at the mic, Daysia delivered a nice — but only nice — rendition of Oleta Adams’ classic. She looked poised and prepared to blow us away with a really amazing performance, then gave one that was at best pretty and at worst pretty flat. When Sasha started singing, I guessed early on that she had this Knockout in the bag. More than her teammates had, she seemed genuinely connected to her song. And though I was all in on the shredded imperfectness of her take on Ed Sheeran, the coaches thought it was flawless. I loved it, so hey, no argument here. “No contest,” Blake remarked when she was done. Agreed. Couldn’t believe I’d never really noticed her before — or that she needed to be stolen to stay in the contest!

So, whose performance really wowed you Monday? And which coach do you think has assembled the strongest team? Vote in the poll below, then hit the comments.

Criterion Added ‘Eve’s Bayou’ In Time For Its 25th Anniversary

Criterion Added 'Eve's Bayou' In Time For Its 25th Anniversary

7 Things In The Weird Al Movie That Are Actually True