Another Trailer for ‘Only in Theaters’ Doc About Laemmle Cinemas

Another Trailer for ‘Only in Theaters’ Doc About Laemmle Cinemas

“We’re always going to want, in some level, that experience of us sitting in that movie theater.” The Film Collaborative has revealed a second trailer for the documentary about cinemas called Only in Theaters. It’s set to open in theaters (of course!) later this month. Only in Theaters is an intimate doc film about the Laemmle Theatres, the beloved 84-year-old arthouse cinema chain in Los Angeles, as they face seismic change and downward pressure. The family behind this multi-generational business – whose sole mission has been to support the art of film – is determined to see it survive. The doc features interviews with Ava DuVernay, James Ivory, Cameron Crowe, Mark Ulano, Leonard Maltin, and others. It has screened at many film festivals before its release this month. As much as I love cinemas, this doc looks a bit rough around the edges. It’s clearly a pandemic project only opening now. I just hope art houses will stay open, we need them.

Here’s the second trailer (+ poster) for Raphael Sbarge’s doc Only in Theaters, direct from YouTube: 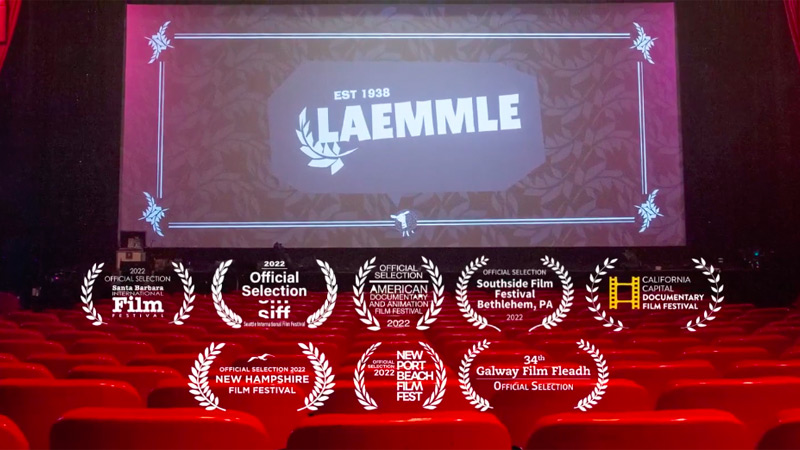 You can rewatch the first official trailer for Sbarge’s doc film Only in Theaters here for more footage.

Only in Theaters is a compelling documentary about cinema and specifically about the legendary Los Angeles Laemmle Theatres chain, family owned & operated, now principally by Greg Laemmle, the heir to the business & its CEO. Laemmle, the beloved art house cinema chain in Los Angeles has an astonishing legacy, with ties to the origins of Hollywood. This is a story about a 3rd generation family business and their determination to survive. Only in Theaters is directed by actor and filmmaker Raphael Sbarge, director of the doc films LA Foodways and Lewis MacAdams: A Celebration of Life previously, and the feature The Tricky Part as well. Produced by Thomas Cassetta, Matt Kubas, Freida Orange, and Rick Pratt. The Collaborative will debut Raphael Sbarge’s doc Only in Theaters in select US theaters (only in theaters! ha!) starting November 18th, 2022 later this fall. For more info on the release, visit the film’s official site.

11 Date-Night Outfits Worth Getting Off the Sofa For

Netflix Launches Tier With Ads, But Some Shows Are Missing

Grey’s Anatomy Recap: Season 19, Episode 5 — When I Get to the Border

The Rookie Round Table: Can Tim Survive a Desk Job?

‘Shazam! Fury of the Gods’ Trailer 2