“Did Megan do something bad?” Universal has debuted a second official trailer for M3GAN, a freaky fun horror movie arriving in theaters in January. This is pretty much just a fun remix of the first trailer. From the most prolific minds in horror—James Wan, the filmmaker behind the Saw, Insidious and The Conjuring franchises, and Blumhouse, the producer of the Halloween films, The Black Phone and The Invisible Man—comes a fresh new face in terror. A robotics engineer at a toy company builds a life-like doll that begins to take on a life of its own. This stars Allison Williams, Violet McGraw, Ronny Chieng, Brian Jordan Alvarez, Jen Van Epps, Lori Dungey, Stephane Garneau-Monten, plus Amie Donald as M3GAN and Jenna Davis as the voice. This is absolutely the new Child’s Play remake, refreshing this “what if a doll came to life and killed people” concept in the most entertaining and absurd of ways. This should be wicked. 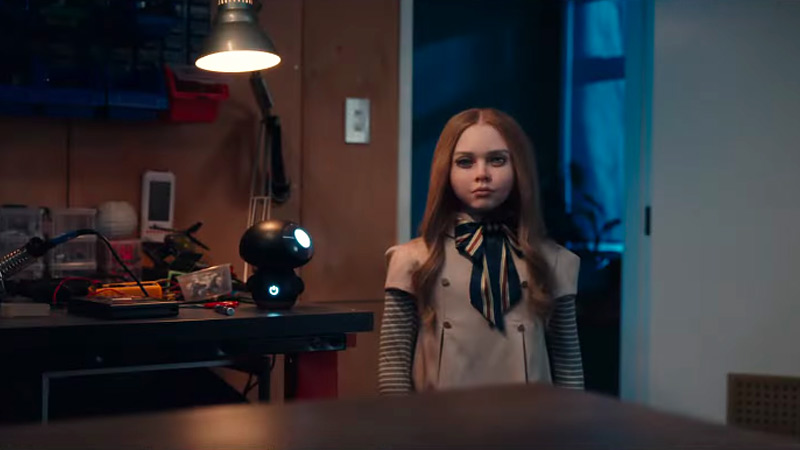 You can rewatch the amusing first trailer for Johnstone’s M3GAN right here, for even more footage.

“She’s more than just a toy. She’s part of the family.” M3GAN is a marvel of artificial intelligence, a life-like doll programmed to be a child’s greatest companion and a parent’s greatest ally. Designed by brilliant toy-company roboticist Gemma (Allison Williams), M3GAN can listen and watch & learn as she becomes friend & teacher, playmate & protector, for the child she is bonded to. When Gemma suddenly becomes the caretaker of her orphaned 8-year-old niece, Cady (Violet McGraw), Gemma’s unsure and unprepared to be a parent. Under intense pressure at work, Gemma decides to pair her M3GAN prototype with Cady in an attempt to resolve both problems—a decision that will have unimaginable consequences. M3GAN is directed by Kiwi filmmaker Gerard Johnstone, director of the film Housebound previously, plus the TV series “The Jaquie Brown Diaries”, “Terry Teo”, “The New Legends of Monkey”. The screenplay is by Akela Cooper, from a story by James Wan and Akela Cooper. Produced by Jason Blum and James Wan. Universal will release Johnstone’s M3GAN in theaters everywhere on January 13th, 2023 just after the New Year.

Lorna Shore's 'Pain Remains' Is the 2022 Album of the Year

Watch: Existential Animated Short ‘Life is a Particle Time is a Wave’