It’s time to explore an exciting new vision from the mind of George Miller… MGM has revealed the first official trailer for the grand new George Miller movie titled Three Thousand Years of Longing, which has been described as more of an epic romantic thriller than anything like any of his past movies. This is premiering today at the 2022 Cannes Film Festival, hence the trailer launching in unison with the film’s unveiling before it lands in theaters nationwide this August. A lonely scholar, on a trip to Istanbul, discovers a Djinn who offers her three wishes in exchange for his freedom. What she wants is love, but can and should he grant it to her? Along their journey together they explore time and passion and the incredible powers of love. Tilda Swinton co-stars with Idris Elba, with a massive ensemble cast including Aamito Lagum, Burcu Gölgedar, Matteo Bocelli, Kaan Guldur, and Alyla Browne. This looks spectacular! I’d expect nothing less from Miller. It looks so ravishing & audacious, he’s shooting for the Moon. Can’t wait to watch. 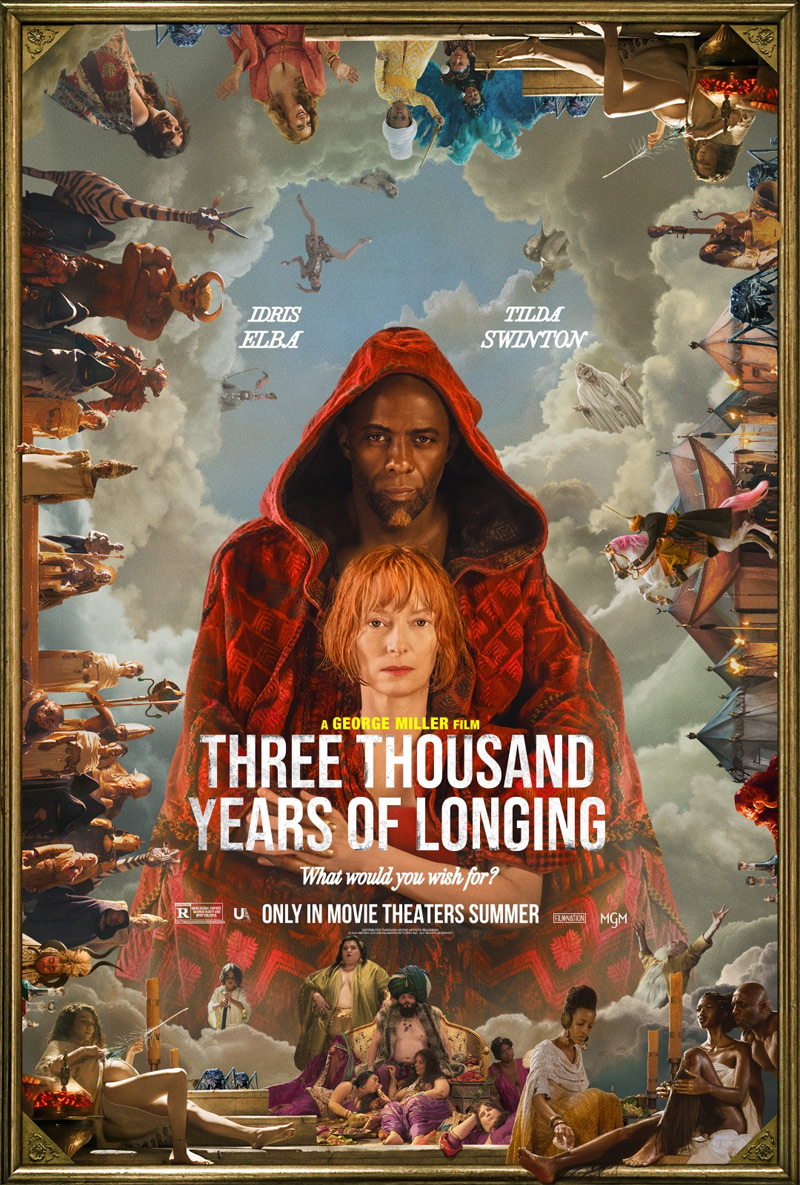 Dr Alithea Binnie (Tilda Swinton) is an academic – content with life and a creature of reason. While in Istanbul attending a conference, she happens to encounter a Djinn (Idris Elba) who offers her three wishes in exchange for his freedom. This presents two problems. First, she doubts he is real and second, because she is a scholar of story and mythology, she knows all the cautionary tales of wishes gone wrong. The Djinn pleads his case by telling her fantastical stories of his past. Eventually she is beguiled and makes a wish that surprises them both. Three Thousand Years of Longing is both written and directed by acclaimed Australian filmmaker George Miller, director of the movies Mad Max, The Road Warrior, Max Max 3: Beyond Thunderdome, The Witches of Eastwick, Lorenzo’s Oil, Babe: Pig in the City, Happy Feet 1 & 2, and Max Max: Fury Road. Co-written by Augusta Gore. Produced by Doug Mitchell and George Miller. With a score by Junkie XL (aka Tom Holkenborg). Based on the short story “The Djinn in the Nightingale’s Eye” by A.S. Byatt. MGM debuts Three Thousand Years of Longing in theaters nationwide on August 31st, 2022.

Everything New on Disney+ in February