“She was a force of nature!!” A festival trailer has debuted for an indie documentary film titled Queen of the Deuce, made by filmmaker Valerie Kontakos. This is premiering at the DOC NYC Film Festival in New York City – with its world premiering happening today (November 11th). It might play at other festivals, but this is the initial unveiling so far. Intro from DOC NYC: Chelly Wilson was a Christmas-celebrating Jewish grandma, a lesbian who married men, and the proud owner of porn theaters in 1970s NYC. Through audio recordings, Chelly recounts her pre-war escape from Greece through her unlikely motherhood and rise to wealth as a shrewd businesswoman on “The Deuce,” aka New York City’s infamous 42nd Street filled with pornographic offerings from the 60s to the 80s. Fascinating WWII and NYC archival footage illustrate this entertaining story of a family and its matriarch, a truly unique character with chutzpah in spades. What a story! “My mother would never apologize for who she was. Ever.” Very good advice for pretty much all of us.

Here’s the first official trailer (+ poster) for Valerie Kontakos’ doc Queen of the Deuce, from YouTube: 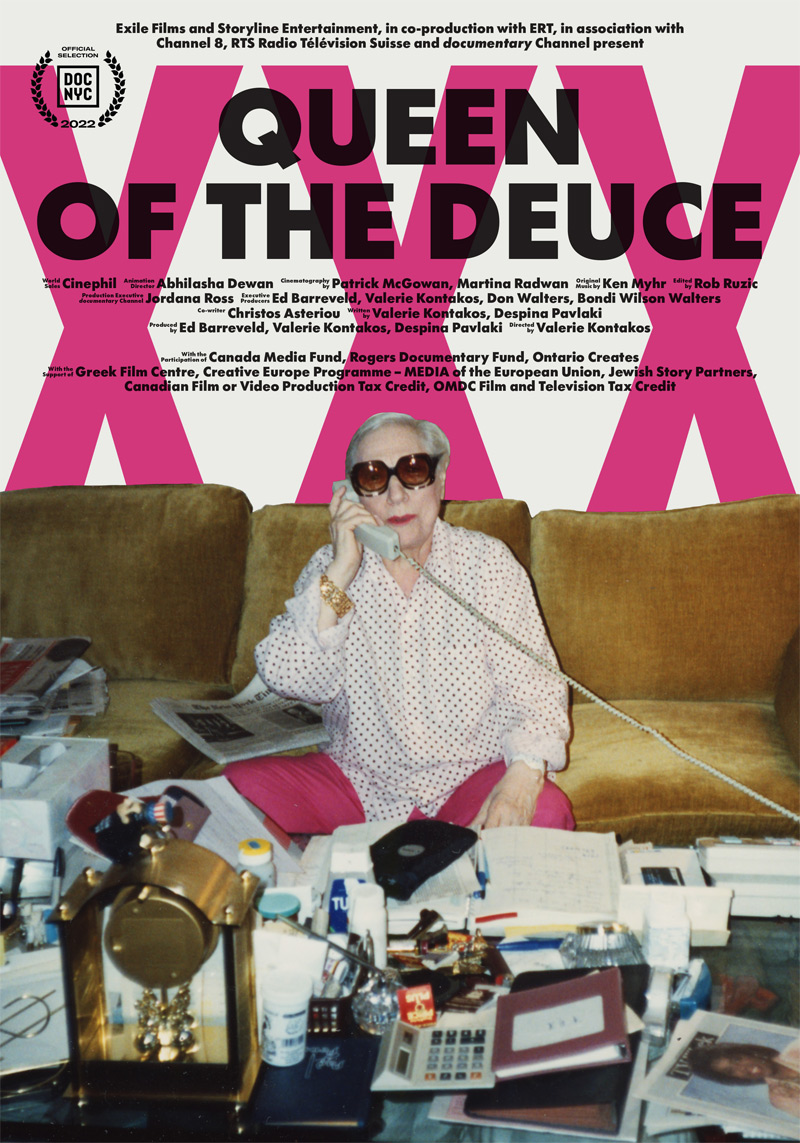 Official description: From the late ’60s to the mid ’80s, in the notorious Times Square area known as the Deuce, the eccentric, Greek-born Chelly Wilson built a gay porn cinema empire and a reputation as one of the most savvy and charismatic figures on the scene in New York. With a cigarette in hand and bags of money stashed in the corner, Chelly regularly held court in her bunkerlike apartment above the legendary 8th Avenue all-male Adonis Theatre, summoning a lively cabal of associates, entertainers, fellow poker players, with her female lovers always hovering and grandchildren often underfoot. Queen of the Deuce reveals Chelly’s origins as a taboo-breaking entrepreneur and traces the fraught events that lead to her departure from Europe on the eve of war, and the unconventional trajectories of her American business ventures and personal life. With the rise of feminism, the sexual revolution and gay pride in frame, the film is an alternate take on cultural history as seen through Chelly Wilson’s empowering story of survival.

Queen of the Deuce is directed by American doc producer / filmmaker Valerie Kontakos, director of the doc films A Quality of Light, Who’s on First?, and Mana previously, plus a few other projects. It’s produced by Ed Barreveld, Valerie Kontakos, and Despina Pavlaki. The film is premiering at the 2022 DOC NYC Film Festival underway now. No other official release dates or plans are set yet – stay tuned for more updates. For more info on the doc and its premiere, visit the festival website. Look like something good worth watching?