“Who’s the guy that’s supposed to pay me?” Utopia has revealed the full official trailer for their upcoming re-release of this 2008 rock doc classic – Anvil! The Story of Anvil! This outstanding, amusing music film originally premiered at the 2008 Sundance Film Festival but it took a while for any distributor to buy it and release it – only later in 2009 did it eventually open (we wrote about it!). Now it’s opening in theaters again in 2022, with a special event in LA featuring a live performance from Anvil! in September. Since 1978, the Canadian heavy metal band Anvil has be known as one of hard rock’s most influential yet commercially unsuccessful acts. Way back in 2006, after a fledging European tour, Anvil sets out to record their thirteenth album and continue to follow their dreams. And filmmaker Sacha Gervasi was there to capture it all. The re-release is timed to the film’s 13th year anniversary and features remastered picture and sound, as well as a new exclusive epilogue interview, only available in theaters. Anvil! is a blast! If you haven’t seen this yet (or want to rewatch and bring some freinds) now is the time to book your tickets and enjoy their return… again.

Here’s the main re-release trailer for Sacha Gervasi’s Anvil! The Story of Anvil!, direct from YouTube: 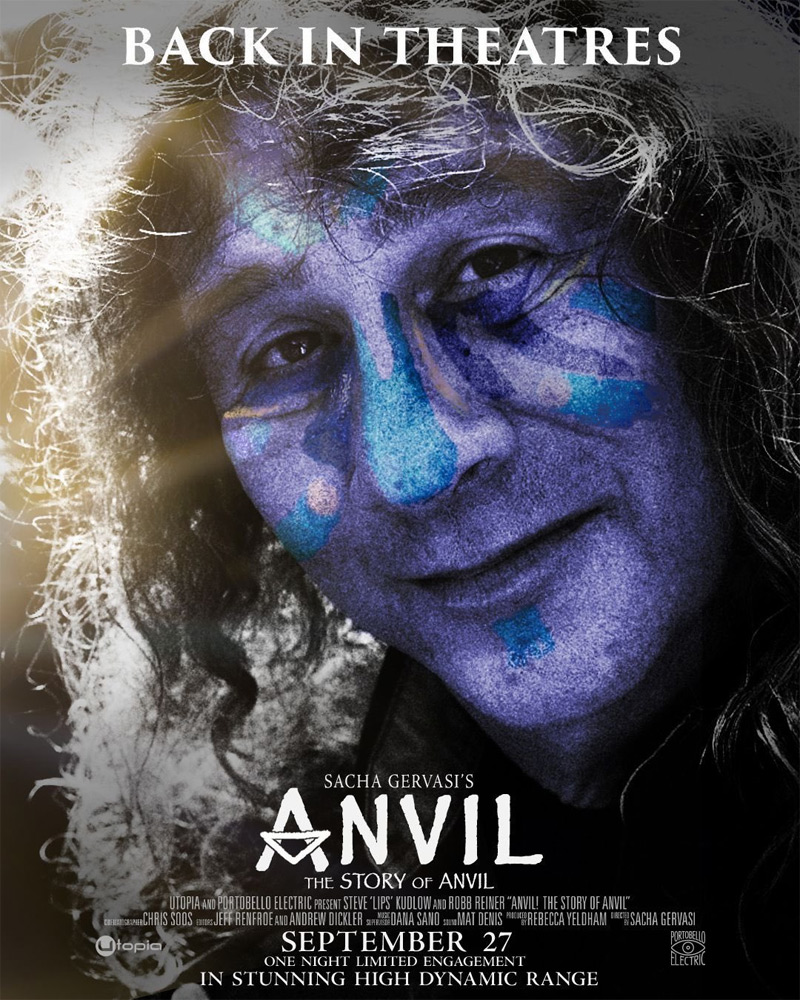 You can rewatch the new 2022 teaser for Gervasi’s Anvil! The Story of Anvil! here, for another look at this.

Anvil! The Story of Anvil follows Canadian heavy-metal band Anvil as they delivered a highly influential 1982 album Metal on Metal that would inspire the likes of Anthrax and Metallica, and then dropped off the map to begin what would become decades of toiling in obscurity. Director and former Anvil roadie Sacha Gervasi follows guitarist Steve “Lips” Kudlow and drummer Robb Reiner as they stumble through a harrowing European tour and reflect on failure, friendship, resilience and the will to follow even the most impossible of dreams. Anvil! The Story of Anvil is directed by British filmmaker Sacha Gervasi, Anvil roadie, and screenwriter of The Big Tease and The Terminal previously. This was his first film before going on to make the films Hitchcock and November Criminals. This initially premiered at the 2008 Sundance Film Festival and was eventually released by Abramorama back in 2009 in select US theaters. There will be a special Q&A screening in Los Angeles in late September – get tickets here. Utopia will re-release Gervasi’s Anvil! The Story of Anvil back in US theaters nationwide starting September 27th, 2022. Ready to rock!?

People Are Reacting To All The "Don't Worry Darling" Feuds

'The School for Good and Evil' Trailer

How National Treasure Role Was Perfect for Catherine Zeta-Jones

The Reformation Sale Is Full of Celeb-Approved Pieces