“Fight for my children, fight for my life, I will.” Samuel Goldwyn Films has revealed official US trailer for The Legend of Molly Johnson, also known as The Drover’s Wife: The Legend of Molly Johnson, which first opened in Australia a few months ago after premiering at the 2021 SXSW Film Festival last year. The story of a lonely bushwoman who struggles to raise her children and run the family farm while her husband is away. In the Snowy Mountains, heavily pregnant Molly Johnson is pushed to her limits. With the burden of a dark secret and intruders to her property, Molly does whatever it takes to protect her children. Starring actress Leah Purcell as Molly Johnson, who also wrote and directed the film, along with Rob Collins, Sam Reid, Jessica De Gouw, Benedict Hardie, Harry Greenwood, Tony Cogin, Nicholas Hope, Maggie Dence, and Bruce Spence. This is a fantastic new trailer, better than I was expecting, with an evocative score to build up the tension as it plays out. You’ll definitely want to watch this film the end of it.

Here’s the official US trailer (+ poster) for Leah Purcell’s The Legend of Molly Johnson, from YouTube: 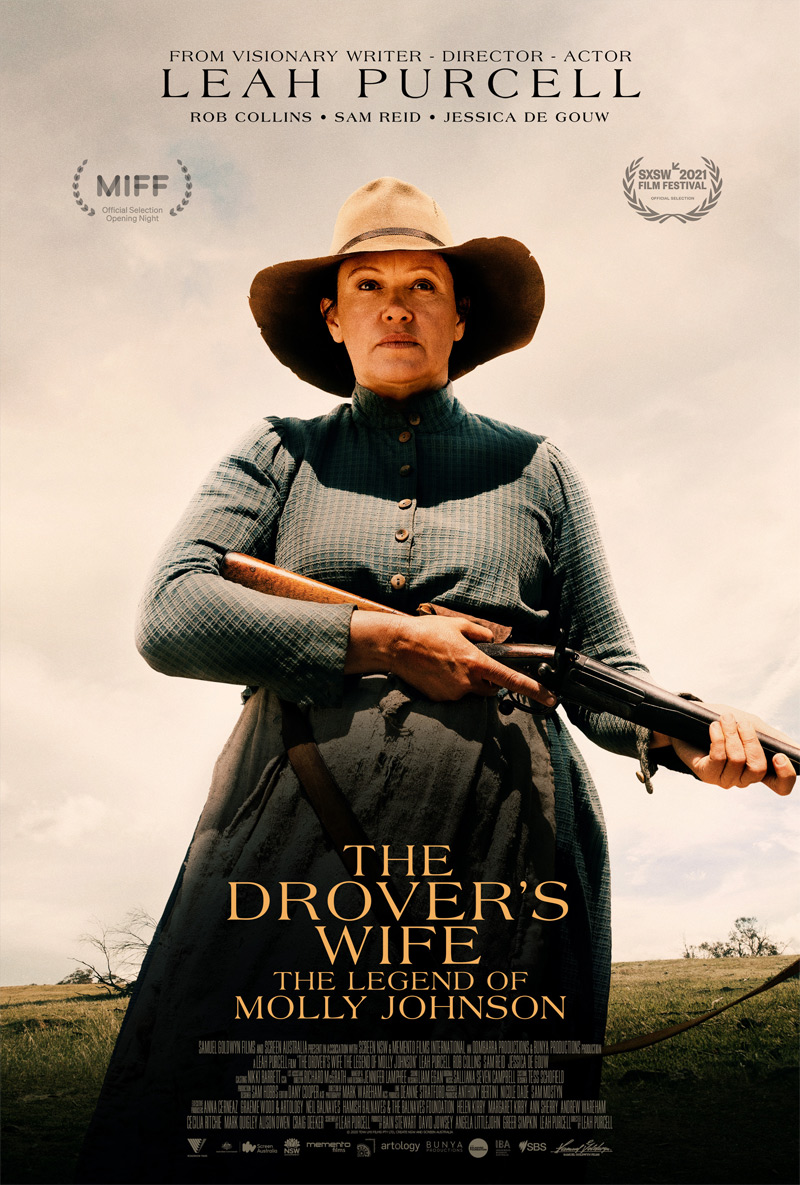 1893, the Australian Outback. The area is rough, the people hard-nosed, the law rather secondary. Here, women – and newcomers anyway – quickly become the pawn of men. Even Nate Clintoff (Sam Reid), who is new in town to keep law and order, still has to fight for his place in the hierarchy. Molly Johnson (Leah Purcell), heavily pregnant and alone with her children on a farm far from town, knows her place only too well. Nevertheless, she doesn’t let it get her down. She does everything to protect her children. Everything. The Legend of Molly Johnson, originally known as The Drover’s Wife, is written and directed by Aboriginal Australian actress / filmmaker Leah Purcell, making her feature directorial debut with this film followed by Here Out West, as well as some TV work and the documentary Black Chicks Talking previously. This initially premiered at the 2021 SXSW Film Festival last year. Goldwyn Films will debut The Legend of Molly Johnson in select US theaters + on VOD starting on August 19th, 2022 late this summer. Want to watch?

18 Baguette Bags That Look Expensive However Much You Spend

Are Kim Kardashian and Pete Davidson Going to Have a Baby Soon?