“Up there with a few men, we can do it.” Pathe UK has released their own official UK trailer for the Notre-Dame On Fire movie from France, dramatizing the tragic fire at Paris’s Notre Dame cathedral in 2019. The French title is just Notre-Dame Brûle and it’s supposed to tell a story “from inside the Notre-Dame de Paris fire of April 2019.” Made by the same director from Seven Years in Tibet and Enemy at the Gates, Frnech filmmaker Jean-Jacques Annaud who has stay away from Hollywood for a while now. The film retraces how heroic men & women firefighters put their lives on the line to accomplish this awe-inspiring rescue. The ensemble cast features Samuel Labarthe, Jean-Paul Bordes, Mikael Chirinian, Jérémie Laheurte, Chloé Jouannet, and Pierre Lottin. It’s set to open in the UK this July after first premiering in France this March, but there’s still no US plans yet. I guess they’re waiting to see how well it plays in the UK first then will set a date. This doesn’t look half bad, I must say. Impressive work turning this event into a movie. 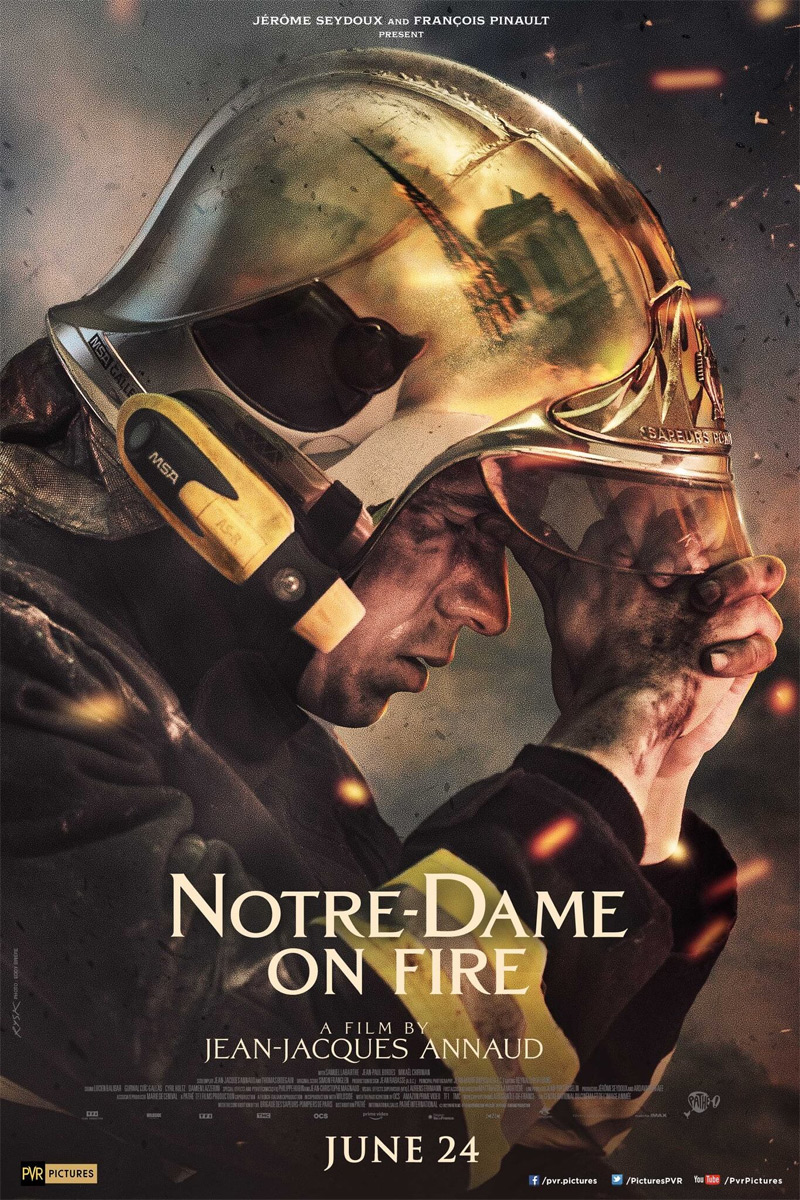 You can rewatch the initial French teaser for Annaud’s Notre-Dame Brûle here, to view the first look again.

Notre Dame On Fire offers a blow-by-blow recreation of the gripping events that took place on April 15, 2019, when the famous Parisian cathedral suffered the biggest blaze in its history. The film retraces how heroic men and women put their lives on the line to accomplish an awe-inspiring rescue. Notre-Dame On Fire, originally known as Notre-Dame Brûle in French, is directed by prominent French filmmaker Jean-Jacques Annaud, director of many films including Hothead, Quest for Fire, The Name of the Rose, The Bear, The Lover, Wings of Courage, Seven Years in Tibet, Enemy at the Gates, Two Brothers, His Majesty Minor, Day of the Falcon, and Wolf Totem previously. The screenplay is written by Jean-Jacques Annaud and Thomas Bidegain. Produced by Jérôme Seydoux. Notre-Dame Brûle already opened in France earlier in March. It next opens in UK cinemas starting on July 22nd, 2022 this summer. Still no US release set yet.

Amazon Prime Day 2022: Everything You Need to Know