“Paris is the beating heart of mixing all arts together.” IMAX has posted an official trailer for a live music experience called Renée Fleming’s Cities That Sing, showing in IMAX theaters in September coming soon. Grammy-award winning Renée Fleming has graced the World’s biggest stages and now she’s debuting on the World’s largest movie screens! Who wants to visit Paris – without actually paying to go there? This magnificent musical-documentary features the incomparable Renée Fleming as she introduces viewers to one of the most majestic cities in the world, and offers an appreciation of its music (including with special performances), culture, art and food, joined by many of its notable residents. This first one is about Paris, filmed at the historic Théâtre du Châtelet. Featuring Renée Fleming, Piotr Beczala, Axelle Fanyo, Alexandre Duhamel, Jean-Francois Verdier, and the Victor Hugo Franche-Comte Orchestra. The next one will be set in Venice debuting in October. Moive theaters have been trying to bring in more audiences with unique big screen offerings like this, and it’s fun to see them continue with something super entertaining and inspiring. 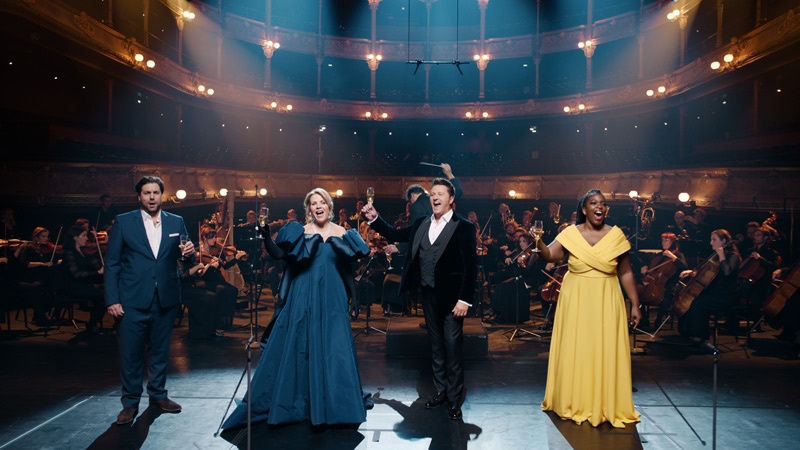 The City of Light benefits from a rich history of opera, architecture, costume, fashion, fine art… and a musical timeline spanning centuries. Performing at the historic Théâtre du Châtelet, Renée Fleming is joined on stage by special guest star Piotr Beczala and featured performers Axelle Fanyo and Alexandre Duhamel as they perform well-known opera selections with connections to Paris. As we tour famous locations in Paris, Fleming takes us through the beloved city to spots that influence arts and culture and importantly those with a personal connection to her. She is joined by designer Alexis Mabille and director Robert Carsen in this love-letter to the culture of Paris and the music born from it! Renée Fleming’s Cities That Sing is directed by French music director Francois-Rene Martin, director of many live orchestra / opera specials and live TV events previously, including this year’s Grand Concert Camille Saint-Saëns and Wolfgang Amadeus Mozart – Idomeneo, Rè di Creta. Written by James Inverne. Cities That Sing will debut in select IMAX theaters starting September 21st, 2022 along with a “one-night-only” event September 18th featuring Renée Fleming in conversation with Kelsey Grammar. Anyone interested in watching this?

‘House of the Dragon’ Characters Explained and Family Tree

Days of Our Lives Review Week of 9-05-22: One Era Ends, Another Begins