“Your secret will remain yours.” Screen Daily has revealed the first official trailer for The Chambermaid, a historical drama from a Slovakian filmmaker that is premiering this week in Estonia. It’s world premiering at the Tallinn Black Nights Film Festival (aka PÖFF) which is underway right now. Originally titled Slúžka in Slovakian, the film is described as “a touching romantic melodrama about 15-year-old Anka and wealthy-born Res who is exactly her age, but at the other end of the social ladder.” It’s a historic story about two female lovers, remaining secret in a world of men, until their lives are torn apart by the chaos of war. “They both realise that they have found a soulmate in each other – like in many world literature classics. The two of them become best friends and lovers, but a tragedy strikes them during World War I.” The Chambermaid stars Dana Droppová, Radka Caldová, Vica Kerekes, Zuzana Mauréry, & Anna Geislerová. This is a good trailer, setting up the passionate romance. But it’s definitely NSFW – featuring some nudity & sex.

Here’s the first promo trailer for Mariana Cengel-Solcanská’s The Chambermaid, direct from YouTube: 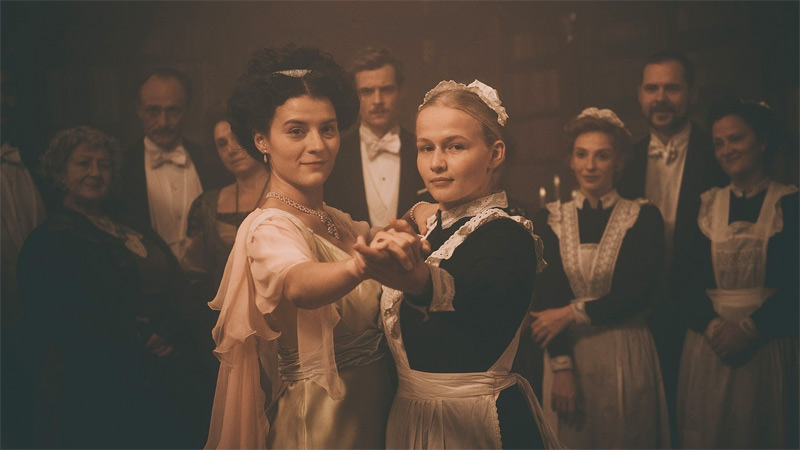 Just before the World War I, the 15-year-old poor Anka arrives from a small Slovak town to Prague to be a maid in a wealthy family. She meets Resi, the daughter of a noble family, who was born and raised to be an adornment and a trophy – of the house, of her family, of the Austria-Hungary. Anka and Resi, two girls born in the same year, but on the other sides of the social ladder, find a soulmate in each another. They become best friends, lovers and the only light in a male dominate world. The Chambermaid, also known as Slúžka, is directed by the Slovakian writer / filmmaker Mariana Cengel-Solcanská, director of Legenda o Lietajúcom Cypriánovi, Láska na Vlásku, Únos, Scumbag, and Zakliata Jaskyna previously, as well as a few other shorts. The screenplay is written by Mariana Cengel-Solcanská and Hana Lasicová. Produced by Radka Babincova and Simona Móciková. This first premiered at the 2022 Tallinn Black Nights Film Festival playing in the Critics’ Picks Competition. No other international release dates are set yet. Who’s interested?

The Way of Water’ Passes $1 Billion at Box Office

Best Women’s Black Tops and Shirts from Amazon The Drop