Joseph Kosinski conquered all kinds of audiences with the sequel Top Gun: Maverick, one of the most successful summer blockbusters in recent years. An action film with such impressive realism and scale that demands to be seen on the biggest screen. Ironically enough, due to a series of particular circumstances related to the global pandemic and Hollywood delays, the director’s follow-up film is headed straight to the streaming world instead. Boasting a high-concept sci-fi premise and with Rhett Reese & Paul Wernick – screenwriters of the Deadpool and Zombieland sagas – at the helm of the story, Kosinski’s Spiderhead is, without a doubt, one of the most exciting works of the year so far, but it fails to reach its narrative potential.

Let me start with the most effortless positive point to praise: the cast. Chris Hemsworth, Miles Teller, and Jurnee Smollett are all exceptional in one of Netflix’s most anticipated movies of 2022. Hemsworth in particular stands out in a somewhat surprising manner, at least for viewers who may only recognize him as Thor. Personally, I consider this Hemsworth – in case people think I’m addressing one of his brothers – one of the most underappreciated actors working in Hollywood. In other great films like Bad Times at the El Royale, Extraction, and even the unpopular reboot of Ghostbusters, the actor has demonstrated a dynamic, emotional range that surely causes some envy among his co-workers.

Even while as the God of Thunder, a character he’s been playing for more than ten years, Hemsworth has recently managed to offer a more complex dimension to an otherwise once not-that-interesting superhero. That said, the Australian actor’s performance in Kosinski’s Spiderhead is possibly one of the best of his career. Demonstrating remarkable versatility, Hemsworth plays Steve Abnesti, the man in charge of the “prison” in which privileged criminals find themselves with the opportunity to reduce their sentence by volunteering as test subjects for several experimental drugs. These “drugs” alter and influence the emotions and wills of those who take them in a drastic, incredibly impactful way.

This is, ultimately, where Spiderhead fails to elevate its clever, captivating premise. With so many other creatively, thematically rich drugs deserving of further exploration, the second act focuses on something simple, becoming repetitive and structurally predictable, ultimately losing the fascinating momentum of the first half-hour. Consequently or not, the apparent foreshadowing of an exciting new drug ends up getting lost along the way. In addition to these points, a major twist / reveal in the third act isn’t as surprising as the film tries to convey and raises some logical narrative issues. 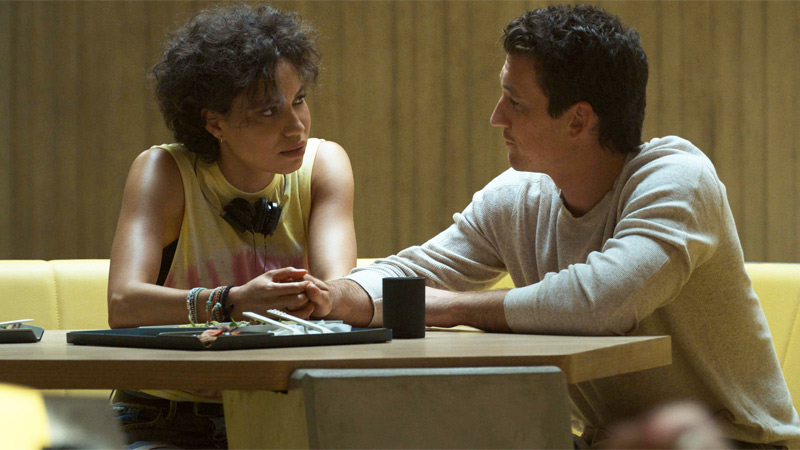 Despite being entirely expected reveals, both the flashbacks and the revelatory dialogues about the crimes committed by Jeff (Teller) and Lizzy (Smollett) hold a strong emotional impact that will undoubtedly catch many viewers off guard. Another partial problem is that the development of the relationship between these characters overshadows the eventual story of Abnesti, which, in comparison, ends up accidentally looking futile, in addition to receiving a less dramatic technical execution. Spiderhead tackles the topic “can human emotions be fabricated?” and it sends a message that fake / forced feelings don’t last forever, but like the overall story, it leaves a lot of ground unexplored.

Still, Kosinski manages to deliver a film with enough entertainment to please most viewers. The filmmaker and Claudio Miranda, his Director of Photography, continue to work together and have become one of those technical combos that inevitably always result in a visually appealing movie. Many stunning shots are spread throughout this one-location flick, which was made under constraints during the pandemic, helping to create a gradually more tense atmosphere of isolation. Composer Joseph Trapanese adds a selection of amusing, witty songs with underlying messages and great timing. Technically, Spiderhead surprised me…

Spiderhead contains a fascinating high-concept sci-fi premise, but even with an extraordinary cast, it falls short of its narrative potential. Chris Hemsworth proves again that he’s one of the most underrated actors working today, while Miles Teller & Jurnee Smollett share excellent chemistry. Technically, Joseph Kosinski and his team are able to generate an uneasy atmosphere in a single location without forgetting some visually impressive shot selection. Nevertheless, the story loses energy and focus during the second act, leaving dozens of other creative, genuinely captivating paths unexplored or underdeveloped, ultimately choosing the safest, most generic alternative. Eventual revelations and twists are somewhat inconsistent but undeniably impactful. I still highly recommend this one. I’m very curious about the general audience’s reaction.

How Stars Celebrated in Photos

Dinosaurs Rule as Lightyear Fails to Take Off

What Rihanna’s ‘Lift Me Up’ Song Lyrics Really Mean

“Crying Makeup” Is the TikTok Beauty Trend Based On Being Sad

Review: Edward Berger’s Adaptation of ‘All Quiet on the Western Front’