Landing in theaters worldwide this July is the 29th movie in the Marvel Cinematic Universe, Thor: Love and Thunder. It’s the second MCU movie this year, with Black Panther: Wakanda Forever still due in November. It is also the fourth solo Thor movie, following Ragnarok from 2017. Love and Thunder is once again directed by Taika Waititi, who brings his comedic style back to the story of Thor Odinson as he contemplates his place among the Gods. Natalie Portman’s return has generated much curiosity, mainly due to her surprising reveal as The Mighty Thor, but Christian Bale joining as the antagonist has also raised expectations tremendously. With Waititi at the helm again, will Chris Hemsworth and company be able to deliver a better movie than Doctor Strange in the Multiverse of Madness? [A spoiler free review.]

Binary answer: yes. More complete answer: also yes, but like much of the recent MCU content, it fails to live up to its full potential. Thor: Love and Thunder reduces the comedy bits that, for example, took complete control of the screen in Thor: Ragnarok, instead focusing more on heavier, complex, sensitive themes such as health / illness, loneliness, love, and grief – the latter has been brilliantly addressed throughout all post-Avengers: Endgame Marvel content so far, clearly being the main emotional through-line within Phase Four. Taika Waititi and co-writer Jennifer Kaytin Robinson’s screenplay gets wrapped up in these matters, and the movie works best when it allows itself to be more intimate and personal.

Perhaps due to the multiple storylines within Thor: Love and Thunder, not all character arcs get the deep development they deserve. A positive example is the resemblances between how the hero Thor (Hemsworth) and the villain Gorr (Bale) deal with the loss of the people they loved in a distinctly opposite manner, but with remarkably similar little details. Gorr finds himself in a place identical to where Thor was after Avengers: Infinity War, where feelings of anger and revenge overpower every other sentiment. Just like how Thor wanted to kill Thanos to try to right the wrongs of the past, Gorr wants all the Gods gone after realizing the hard way that his religious devotion has done him no good.

In Thor: Love and Thunder, the eponymous character faces an antagonist with understandably traumatic motivations, invulnerable to any kind of influence or deterrence. Basically, a version of Thor himself that couldn’t escape the emotionally dark spiral. Regarding any actors’ participation in a single Marvel film, Bale delivers one of the best performances within the MCU, embodying the insanity that takes hold of Gorr, becoming the absolute highlight above even Hemsworth and Portman. Literally, every scene with the ex-Batman is worthy of being the best moment of the whole movie due to his fascinatingly frightening, menacing presence yet still capable of unmistakably human feelings.

As for Hemsworth, Thor has become such a natural role for him that “perfect” is the ideal word to describe his performance. In my humble opinion, he’s one of the most underrated actors in Hollywood, boasting phenomenal talent and an impressive range that I hope will be put to good use in his post-Marvel future. In Thor: Love and Thunder, Thor finds himself at a more advanced stage concerning the grief that led him to gain weight and to pretend that “everything is fine”. Nevertheless, the character continues to struggle to let someone get close to him (again) in order to escape the insufferable pain of the past. His arc of inner peace, seeking love, and accepting the events of life is as captivating as it is fun, but…

His relationship with Jane Foster could and should have been better explored, especially from the side of Portman’s character. The actress delivers an excellent performance, demonstrating that she genuinely wished to return, portraying a character who has always deserved more screen time. While I appreciate the fact that Thor: Love and Thunder doesn’t try to solve serious real-life problems with simple magic or make jokes about the respective issue, the general tone remains too nonchalant, and comedy is still around in practically all the other plot points. The tonal balance between the different storylines makes the third act incapable of achieving even a fraction of the emotion it was supposed to powerfully emanate.

From the explanation of the Mighty Thor powers granted to Jane during the climax of the film, Portman’s character arc contains many bold yet divisive creative decisions. Jane’s absence – it’s been more than ten years since she was last in any movie – also ends up contributing negatively to a possible disconnect with the viewers. By comparison, even King Valkyrie (Tessa Thompson) and Korg (Waititi) manage to have a more significant impact. Speaking of which, Thor: Love and Thunder couldn’t have had funnier secondary companions. Thompson remains one of my favorite supporting actresses in the MCU, while Korg never loses his humorous aura, despite not being a novelty anymore. 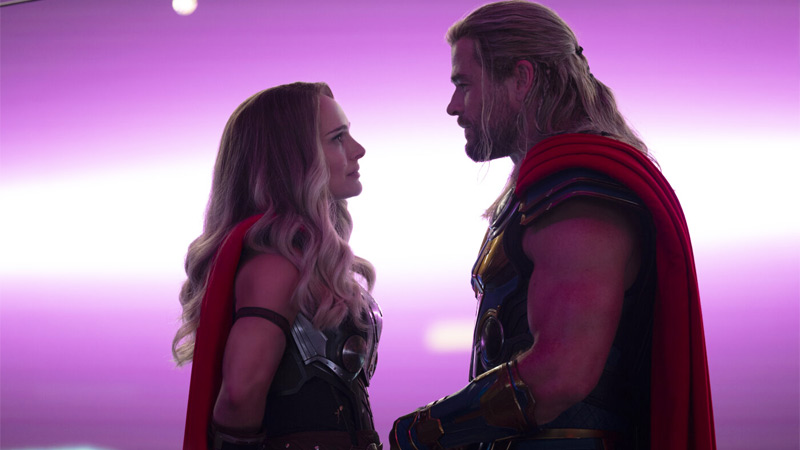 On a technical level, the visuals stray from the generic MCU palette, including an absolutely stunning black-and-white sequence. This is where Thor: Love and Thunder provides one of the best action sequences of the entire Marvel Cinematic Universe with an exhilarating fight scene elevated by the color (or lack of) choice. It’s hard to ignore the unique soundtrack that isn’t shy of its rock ‘n roll preference to give the action moments a special touch, despite repeating too many songs heard previously. The first act is by far the most consistent. It establishes all the characters, as well as the main plot and the individual arcs, all efficiently, maintaining an excellent balance with the humor that, during this act, works exceptionally well.

Unfortunately, Thor: Love and Thunder fails to reach its full potential by the end. The comedy that brought me to tears with laughter in the previous movie not only has lost its impact in this one, but severely affects the character arcs described above. In a packed theater, I was only able to hear a collective laugh two times, something weirdly unusual with this type of film, especially in the MCU. My enjoyment may have been influenced by the awkward silence of my audience, but the truth is that the vast majority of the jokes fall flat, particularly after the beginning of the second act, where the humor takes a less imaginative turn.

One particular joke involving a well-known meme is repeated several times throughout the runtime, quickly becoming annoying – it only worked well twice. The balance of humor is better controlled in Waititi’s Thor: Ragnarok, even though the latter contains more comedy overall. The emotional aspects are stronger than in the prior installment, so the endless jokes take away from that sincere emotional value – a characteristic more and more viewers have been criticizing in recent years. The problem isn’t with the comedy itself but in the fact that this movie holds a more dramatic narrative that deserved more attention than jokes.

Story-wise, Love and Thunder doesn’t innovate, following the usual structure and formula of the studio. While there’s absolutely nothing wrong with that, there’s a plot point that proves pointless and irrelevant to the overall narrative, being merely a marketing ploy to sell the next film. The objective of the protagonist isn’t fulfilled in this detour, and something that was supposed to be essential becomes a variation of a MacGuffin in the third act. The action set piece is easily forgettable, and Russell Crowe’s interpretation of Zeus is nothing more than an unbearable caricature, employing an accent so absurd that it ends up taking away all seriousness from his character, damaging an eventual menacing presence in future works.

Finally, the action of Thor: Love and Thunder meets the bare minimum requirements for an MCU movie. The B&W sequence takes the trophy, the first act featuring the Guardians of the Galaxy – as expected, they exit the movie quickly after that – brings good levels of entertainment. But everything else involving generic CGI monsters born out of shadows… I understand the intention of trying to save time and money with “VFX leftovers”, hiding the imperfections in the darkness of night – a well-known workaround for many other Hollywood movies – but, unfortunately, most of these scenes turn into a sometimes incomprehensible blend of CGI elements, where it becomes a true challenge to understand what’s really going on.

That said, if you enjoyed Thor: Ragnarok, you’ll hardly leave disappointed with Thor: Love and Thunder. Depending on the expectations and preferences of each viewer regarding certain characters, opinions may vary, but I anticipate an overall positive reaction.

Thor: Love and Thunder boasts a bittersweet story about finding peace & love in suffering & pain, without forgetting the necessary thunderous action that reaches its best level in a long sequence surrounded by a breathtaking black-and-white color palette. Christian Bale stands out with a terrifying performance as one of MCU’s best villains in recent years, while Chris Hemsworth & Natalie Portman share excellent chemistry. Visually distinct and with a unique soundtrack, the formulaic screenplay benefits immensely when focusing on the complex arcs of each character. Still, the continuous comedy bits – far from the hilarious creativity of the past – deny further exploration, removing emotional value from the third act. The action with generic CGI shadow monsters holds predictable issues, and an irrelevant plot deviation only serves as a teaser for future content. Overall, Taika Waititi succeeds yet again, but this time, he fails to reach his full potential.

Another Fun Japanese Trailer for Shinkai’s ‘Suzume no Tojimari’ Film