“What they were playing is exactly what you’re not meant to be playing in Australia.” Madman Films in Australia has revealed a trailer for the rock documentary film Love in Bright Landscapes, which initially premiered at the 2021 Melbourne Film Festival last year. It’s out in Australia now, but there’s no other US date set yet – hopefully by the end of this year. The film tells the inspiring, tragic and intimate life story of David McComb, cult Australian singer/songwriter and driving force behind one of the greatest Australian bands, The Triffids. “It’s the debut feature from Melbourne writer and director Jonathan Alley, who made it over a 13-year period drawing on archival footage and interviews with the musician’s colleagues, family and friends. Excerpts of McComb’s music feature heavily throughout, with his poetry and letters read by novelist DBC Pierre.” McComb died in 1999 from heroin, “leaving a slew of unanswered questions, and a legacy to be discovered as one of Australia’s greatest artistic hearts and minds.” Looks like an engaging doc. 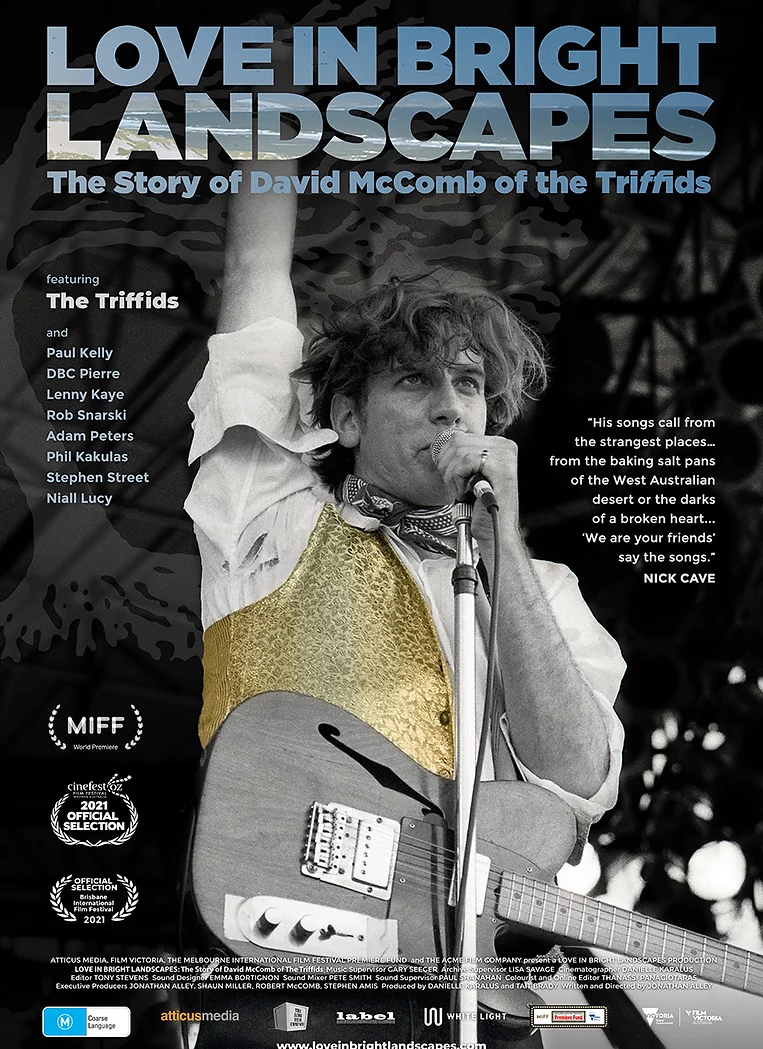 Australian singer/songwriter David McComb believed in the song. More than believed in them, he lived for them, from his early art/punk pranks in 1970s Perth, Australia to the darkly atmospheric brilliance of his last works, he ran at their whim, from his insomniac writing jags to lost loves across the continents, they forever ran at his heels. He grappled with them, shaped them, and perfected them. Love in Bright Landscapes has been created with unprecedented access to family archives revealing the man behind the songs, beautifully restored 35 slides and delightfully evocative home movies. McComb’s poetry and newly discovered letters are read by Man Booker prize winning novelist DBC Pierre (Vernon God Little, 2003), and the film brings fans old and new never-before-heard compositions including his final compositions with heart-rending interviewees with his colleagues, family and friends. Love in Bright Landscapes is directed by Melbourne filmmaker Jonathan Alley, making his feature directorial debut with this project. It premiered at last year’s Melbourne Film Festival, and it already opened in Australian cinemas earlier in May 2022. No other international release dates are set yet. For more details visit the film’s official website.

"[Go] Berserk on the Skulls of the Democrats"

Paper magician Lobulo on the art of making mistakes

The Rookie: Feds Season 1 Episode 12 Review: Out for Blood