“Can you back? Yes. Should you go back? It’s a different question…” Apple has revealed another official trailer for the acclaimed indie drama Causeway, marking the feature directorial debut of filmmaker Lila Neugebauer. This premiered at the 2022 Toronto Film Festival to tons of great reviews, praising both of the lead performances. It’s opening in theaters and on Apple TV+ this weekend. A US soldier suffers a traumatic brain injury while fighting in Afghanistan. When she returns to New Orleans and begins to recover, she struggles to adjust to life back home. Starring Jennifer Lawrence and Brian Tyree Henry. “These two damaged souls’ budding friendship forms the center and the heart of Neugebauer’s debut feature—a quiet but devastating, and ultimately uplifting, story about coming to terms and moving forward.” The cast also includes Jayne Houdyshell, Linda Emond, Stephen McKinley Henderson, and Frederick Weller. This trailer reveals too much, but I’m still looking forward to it. Got a good feeling I’m going to love this one. 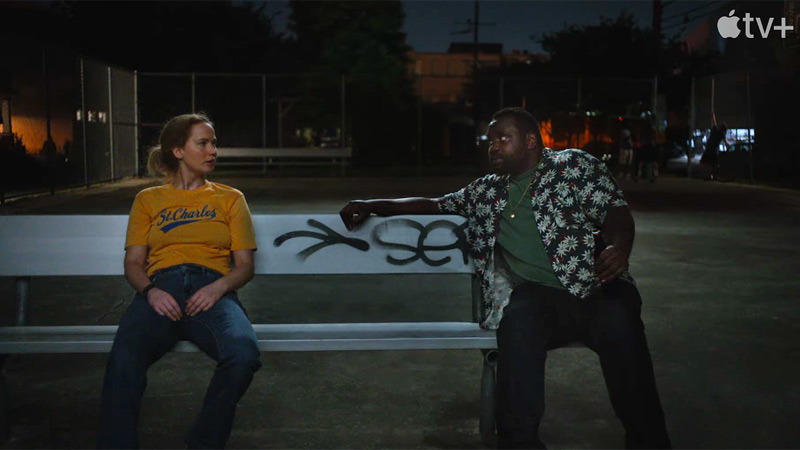 You can rewatch the first trailer for Lila Neugebauer’s Causeway here to view even more footage.

In Lila Neugebauer’s film Causeway, Oscar-winning actress Jennifer Lawrence plays Lynsey, a military engineer who has returned from Afghanistan with a debilitating brain injury after an IED explosion. It’s a painful and slow recovery as she relearns to walk and re-trains her memory, aided by a chatty but tender caretaker (Jayne Houdyshell). But when she returns home to New Orleans she has to face memories even more aching and formative than those she had in service: a reckoning with her childhood. Staying with her mother (Linda Emond), with whom she shares a tense relationship, all Lynsey wants to do is return to her work as an engineer. Her doctor (Stephen McKinley Henderson) is wary, and so in the meantime, she gets a job cleaning pools. When her truck breaks down she meets James Aucoin (Brian Tyree Henry), who works at the auto repair shop and offers her a ride home. Slowly they start to rely on each other for company and solace. James, it turns out, is also suppressing his own past trauma. Causeway is directed by American filmmaker / theater director Lila Neugebauer, making her feature directorial debut after a few TV episodes previously. The screenplay is by Luke Goebel, Ottessa Moshfegh, and Elizabeth Sanders. This initially premiered at the 2022 Toronto Film Festival last month. A24 + Apple will debut Causeway in select US theaters + streaming on Apple TV+ starting November 4th, 2022 coming soon. Who wants to watch?

Everything We Know About ‘Heartstopper’ Season 2

Fire Country Round Table: Is Bode Making Things Worse for Himself?

Romy mashes up Harry Styles and Stormzy in the Live Lounge