‘The Corridors of Power’ Doc Official Trailer About American Leaders

‘The Corridors of Power’ Doc Official Trailer About American Leaders

“Do you want justice? Or peace? You can’t have both.” A very provocative statement, but it’s true. Showtime has debuted an official trailer for a new documentary film from acclaimed director Dror Moreh titled The Corridors of Power, which first premiered at the 2022 Telluride Film Festival a few months ago. It’s also playing at the DOC NYC Film Festival happening right now in NYC, before opening in limited theaters later this month. The doc film is a riveting and thought-provoking examination of how American leaders have responded to reports of genocide, war crimes and mass atrocities after the fall of the Soviet Union, when America stood as the only global superpower. I’m glad it takes a hard-hitting stance: “With affecting archival footage and extensive interviews, the film centers around former UN Ambassador Samantha Power’s haunting question: Why do American leaders who vow ‘never again‘ repeatedly fail to stop genocide?” A lot of major names are in this, from Madeleine Albright to Hillary Clinton. Looks fascinating – a must watch.

Here’s the official trailer (+ poster) for Dror Moreh’s doc The Corridors of Power, from YouTube: 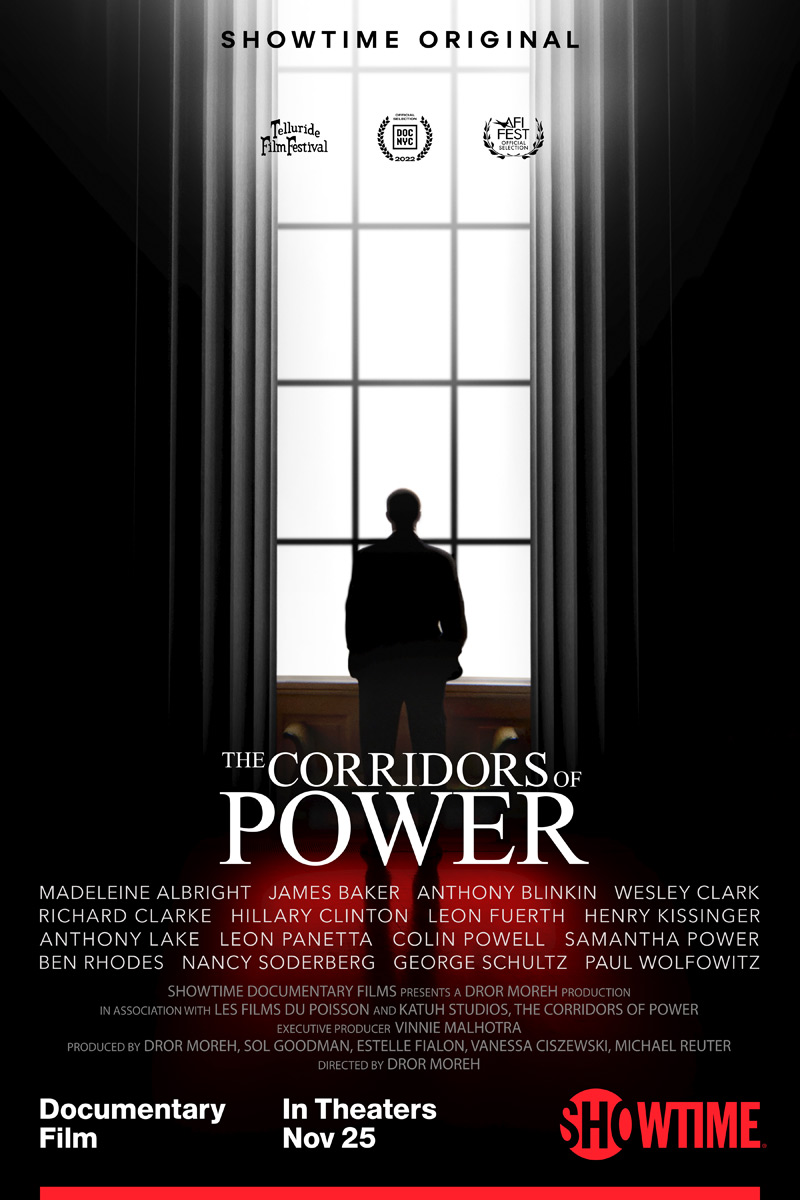 Directed by Oscar nominee Dror Moreh, The Corridors of Power documentary is a riveting examination of how American leaders have responded to reports of genocide, war crimes and mass atrocities after the fall of the Soviet Union, when America stood as the only global superpower. By combining in-depth interviews with rare archival footage and state-of-the-art CGI animations, Dror Moreh gives viewers the unique opportunity to peek behind the scenes and behind the headlines to better understand not the “what,” but the “why.” Featuring interviews with esteemed luminaires, including Madeleine Albright, James Baker, Condoleezza Rice, Colin Powell and Hillary Clinton, the film reveals how our past mistakes can dictate our future. The Corridors of Power is directed by the Academy Award-nominated Israeli cinematographer / filmmaker Dror Moreh, director of the docs Sharon, The Gatekeepers, and The Human Factor previously, and other projects. It’s produced by Moreh, Sol Goodman, Estelle Fialon, Vanessa Ciszewski, and Michael Reuter. This premiered at the 2022 Telluride Film Festival. Showtime will debut The Corridors of Power in select US theaters (NY & LA) starting on November 25th, 2022. For more info, visit Showtime’s website.

‘Are You There God? It’s Me, Margaret’ Trailer