In 2002, Jake Gyllenhaal starred across from Jennifer Aniston in The Good Girl, a movie about two lovers, with Aniston playing an unhappily married woman having an affair with her younger co-worker. There are quite a few intimate scenes in the film, and in an interview on The Howard Stern Show, Gyllenhaal was asked about what it was like filming them with Aniston.

“It was torture, yes it was, but it was also not torture,” Gyllenhaal joked. “I mean, come on. It was like a mix of both.”

He said he had a crush on Aniston at the time, which made it difficult to pretend to be in love, but the actual “mechanical nature” of the physical scenes definitely provided a buffer.

“Weirdly, love scenes are awkward because there are maybe 30, 50 people watching,” he said. “That doesn’t turn me on.”

He continued, “Most of the time, it’s oddly mechanical, right? And also, it’s a dance, like, you choreograph it for a camera. It’s one of those like a fight scene, you gotta choreograph those things and I always have tried.”

Aniston also suggesting placing a pillow between them to make things a bit easier.

“That was just pre-emptive and used generally always when actually in a horizontal place in that movie,” he told Stern. “I think that was actually a Jennifer suggestion, she was very kind to suggest it before we began.”

The Donnie Darko actor added, “She was like, ‘I’m putting a pillow here.’”

The interview was actually recorded in 2021, but started circulating again this month. 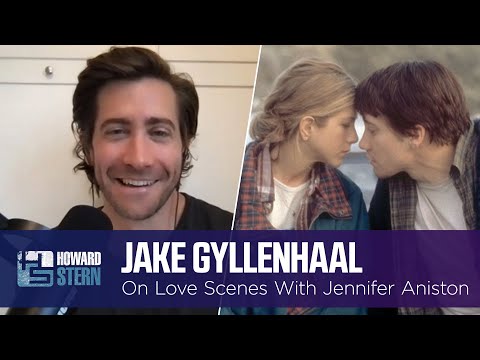 Gyllenhaal’s past work has been coming up a lot lately, with director Ang Lee discussing his style on the set of Brokeback Mountain and “clashes” with Heath Ledger while being interviewed by Empire magazine, .

“When it came to Jake, Heath had a very different attitude towards their work. Sometimes there was friction — not quarreling, but a clash of styles,” the director said. “Sometimes I would mediate that, but they were both good in different ways. They would always make the effort to find a way through.”

Aimée Lutkin is the weekend editor at ELLE.com. Her writing has appeared in Jezebel, Glamour, Marie Claire and more. Her first book, The Lonely Hunter, will be released by Dial Press in February 2022.

People Think Cher Is Engaged To Her Boyfriend

Watch: Lovely Animated Short ‘Beyond The Hill’ About Grief & Hope

Watch: Lovely Animated Short 'Beyond The Hill' About Grief & Hope