These gents managed to preserve against the odds and survive a horror movie. 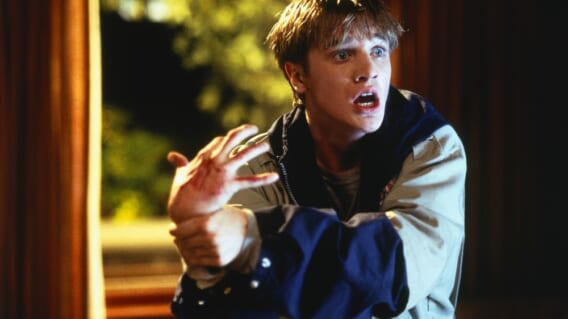 The ‘final girl’ trope is a long-standing tradition that dates back to films like Black Christmas and Halloween. The plucky heroine undergoes a transformation that sees her shedding her mild-mannered ways and going toe-to-toe with pure evil. When used effectively, the tactic has the potential to deliver a satisfying and empowering viewing experience. However, on occasion, a male character has what it takes to make it all the way to the denouement. And I like to call such a specimen a ‘final boy’. The final boy usually undergoes a similar transformation to his female counterpart. He must dig deep and rely on inner strength he didn’t realize he possessed to face off with evil in one form or another.

So, with that in mind, I am looking back on a handful of memorable final fellas that rose to the occasion and successfully survived a horror film.

Ash in The Evil Dead

Ash Williams (Bruce Campbell) starts as something of a reluctant hero. However, after much trial and tribulation the Groovy One manages to make it to the end of The Evil Dead intact. Surprisingly, Ash is able to repeat that feat a second and third time in Evil Dead 2 and Army of Darkness. He is something of a buffoon and one that doesn’t look before leaping. But in spite of that, Ash has become an indispensable fixture in genre cinema. Not to mention, the Ash character has gifted horror fans with quotable one-liners that have gone on to become part of the pop culture vernacular.

I think the reason Charley Brewster (William Ragsdale) is such an endearing character to horror fans relates to the character actually being a horror fan. I see a lot of myself in Charley. And the fact that he emerges victorious feels like a vicarious victory to me as a viewer. Not only does Charley survive the film, he manages to do so without ever being turned into a bloodsucker. Well played, Charley. Well played.

Anton (Devon Sawa) has a lot in common with fellow final fella Ash Williams. And I don’t just mean that he loses a hand to the forces of evil. Like Ash, Anton doesn’t really come on the scene with a lot of obvious hero potential. Instead, he comes across like something of an underachiever. But, Anton rises to the occasion and even cheats death to make it to the denouement (albeit in a full body cast) of Idle Hands.

Reggie and Mike from Phantasm

The Reg-Man (Reggie Bannister) and Mike (A. Michael Baldwin) endure something of a hell on earth to make it to the end of Phantasm. They face off against The Tall Man (the late Angus Scrimm) in an interdimensional showdown, where both prove themselves to be resourceful and heroic, earning the right to be called final fellas. Of course, this will not be the last time the iconic duo faces off with The Tall Man. They each return for the next four films, culminating with the series’ final installment, Phantasm Ravager.

The central trio in Hostel is more than a little bit grating to me. However, of the three leads, Paxton (Jay Hernandez) is probably the least obnoxious. And perhaps that’s what propels him through to the film’s pulse-pounding conclusion. In spite of having what it takes to survive the first series installment, Paxton wasn’t able to evade the sinister Elite Hunting Club organization indefinitely. No, Paxton was put through the ringer, only to be killed off in the prologue of Hostel II.

Devon Sawa has the distinction of being a two-time final fella. After making it to the end of Idle Hands, Sawa went on to play lead character, Alex, in Final Destination. Alex manages to survive Flight 180 thanks to a premonition and ultimately cheats death long enough to survive the series’ first installment. Sadly, Alex was later killed (off-screen by a falling brick) in the narrative gap between the first and second installments in the franchise.

Jesse from A Nightmare on Elm Street Part 2: Freddy’s Revenge

A Nightmare on Elm Street 2 threw a lot of the mythology established in the first film out the window. All of a sudden, Freddy can possess people during waking hours because, reasons. Additionally, the series’ second installment also does away with the more conventional final femme trope in favor of a final fella. Like a good horror movie survivor, Jesse (Mark Patton) digs deep, eventually managing to emerge victorious over The Springwood Slasher.

Who are some of your favorite final fellas? Hit me up on Twitter @FunWithHorror and let me know!

Showmance or the Real Deal? Investigating the Couples of Dancing With the Stars

5 Things to Know About the Country Star