A Familial Horror Story That Overstays Its Welcome

This new UK horror film about messed up families is worth a watch if you like atmosphere over shocks. 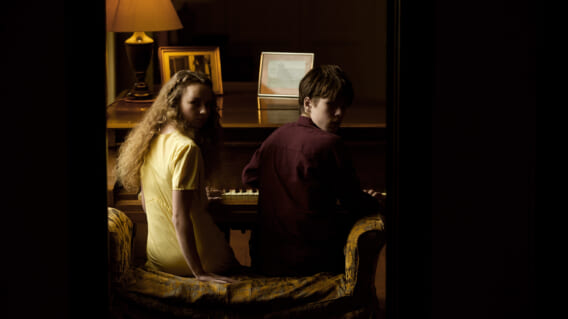 Kids today are making it harder to decipher between normal, healthy teenage angst and disturbing, psychotic behavior. In the claustrophobic English thriller Homebound, children start exhibiting troubling signs early on that could potentially lead to kidnapping or, even worse, murder.

It’s never easy to be the new woman in a relationship and harder still when the matron of the family is still firmly in the picture. Director Sebastian Godwin mostly succeeds with a moody exploration of a dysfunctional family housing a dark secret. However, the end revelation doesn’t quite hit hard enough for the central mystery to effectively pay off.

Holly (Aisling Loftus) is understandably a little nervous about meeting her fiancé Richard’s (Tom Goodman-Hill) three children during a weekend getaway at his ex-wife’s secluded country home. Offering no information about their mom’s whereabouts, the kids act suspicious from the start. Once night falls and the drinking starts, Holly begins to see the cracks in the idyllic family facade. Richard suddenly seems off, too, leading Holly to search for clues to uncover the fate of the woman she’s replacing.

Also Read: ‘The Innocents’ Review: No Kid Is Safe In The New Dark Horror Film

Homebound works best when the house itself and the surrounding grounds start feeling more like a trap than a retreat. Puzzled looks that Loftus directs towards her potential new family during a rambunctious playtime romp show just how uncomfortable she’s becoming. Then, Richard goes way too far at a late-night party when he allows his kids to get drunk on champagne. Holly’s expressions say more than her dialogue as it becomes glaringly apparent that something is definitely off here.

Every family activity in Homebound goes awry in some way. An impromptu swim in a freezing pool becomes a possible drowning attempt, for instance. Every excursion has a violent undercurrent. Suspicions grow when Richard himself continues to act like this is all normal behavior. Even when the kids tie up Holly and their seemingly clueless father, he laughs it off.

Holly is forced to find out the truth while she’s processing all of this in real-time. There’s no great mystery she uncovers, however. The tension comes from realizing the severity of her situation when her greatest fears are confirmed.

Homebound is an effective, confined familial thriller that isn’t fully formed. The brisk running time puts Godwin’s film in limbo between an extended short and a fully fleshed-out feature. The decision to focus on the shocked expression on Holly’s face instead of the actual horror leaves too much to the imagination.

Homebound is in Select Theaters and On Demand now

Homebound is a tightly contained thriller that chooses situational terror over graphic horror, to mixed results.