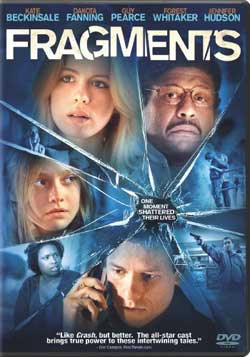 In the aftermath of a gruesome restaurant murder, the survivors of the attack are left to ponder their own mortality and how it relates to their connection to society. Forest Whitaker, Guy Pearce, Kate Beckinsale, and Dakota Fanning headline Little Fish director Rowan Woods’ adaptation of Roy Freirich’s debut novel. (Synopsis written by Jason Buchanon, All Movie Guide)

Traumatic experiences do not only effect the ones who are forced to experience them, but the ones that are related and/or directly share lives with traumatized people are also forced to live in this world of helplessness that cannot be cured through repetitive support and love. Not only do victims/witnesses feel distraught by the crime inflicted on them, but also the feeling of “What if” can haunt a person in that everyday life becomes almost impossible to bear. In Rowan Wood’s Fragments, five witnesses to a horrific murder are forced to deal with the terrible reality of post traumatic stress syndrome and eventually have separate breakdowns not being able to handle the cruel hand of violence that was presented to them. The title Fragments also hints at the fact that the shattered pieces of a traumatic experience aka witnesses much live on in everyday setting broken and edgy.

Immediately, the viewer is shown a car traveling down the road with images of an abandoned diner. This diner will take the setting of the brutal massacre that haunts all the main characters’ lives.

The teenage girl in the passenger seat is Anne Hagen (Dakota Fanning), and is being driven by mother Doris(Jeanne Tripplehorn.) As Anne stares from the window, a recollection of the diner murder replays in her head almost vividly. The flashback starts with Charlie Archenault (Forest Whitaker) reading through pamphlets on dealing with Cancer, and being assisted by waitress Carla Davenport (Kate Beckinsale.) Charlie holds out a coupon that displays the #7 for free merchandise, and Carla announces that this may be Charlie’s lucky day. Also, Anne is shown sitting across for her father and good friend Jimmy Jasperson (Josh Hutcherson.)Another diner customer that is present is Dr. Bruce Laraby (Guy Pearce), whom is just finishing his morning coffee before work.

When Dr. Laraby leaves the restaurant, he lets in a man entering as a friendly gesture. Little does he know that he just let in a gunman who is about to open fire on the inhabitants of the diner.

When the gunman starts shooting, everyone’s response clearly highlighted through each witness’ recollection throughout the movie.
The shooting is a brief round of gunshots, which injures Anne’s father, Charlie, and kills the gunmen through a self-inflicted shot to the head. The hospital is the next scene, where blood-soaked gurneys are being wheeled in. Dr. Laraby works on the father, but loses him in dismay. Dr. Laraby immediately recollects the fact that he was at the diner, and was the man who let the gunman in.

The shooter is also pronounced dead on arrival, but Charlie miraculously survives the gunshot in his right side of his neck. Each witness is given separate counsel by Dr. Abler (Troy Garity), but the psychologist cannot seem to affect the already distraught patrons of the diner.

Anne chooses to use her spirituality as her recovery process, enlightening fellow friends and encouraging prayer throughout everyday life. Jimmy is very quiet, and has the most problems due to evaluation of psychological problems in the past. Charlie feeds his traumatized mind by trying his luck at Morango Casino, and eventually wins by rolling repetitive sevens at the game of Craps. Dr. Laraby goes on a streak of losing patients, and attempts to find ways to overmedicate his migraine inflicted wife with various pain relievers so that he can cure her and help him feel that he can still help people even though he lost some.

Carla comes home to her infant child crying, and has problems attending to the baby while she is still emotionally riveted by scenes of the diner shooting.

Each character’s way of distracting the mind of a traumatic experience causes more pain then they can handle, and leads to different outcomes of learning to deal with the experience when it first happens versus putting it off until an emotional breakdown is at hand. The portrayals of the witnesses were very well done, and the viewer is forced to deal with the separate stages of recovery as being shown in the movie.

The cast is filled with stars from previous hit movies, which help appeal to the viewer as a very watchable movie before viewing. The gunman’s motives are not quite revealed throughout the movie, but each character’s development is completely understandable and well written. There are very little shots of blood and gore except for a brief surgical scene, and throughout the various flashbacks of the murder scenes. Fragments is a film adaptation of novel by Roy Freirich called Winged Creatures, and was also first released under the same name as the book.

This movie is an excellent portrayal of what happens to victims of crime after the fact. Not only does Fragments provoke the notion that crime is not easy to handle, but forces us into an emotionally unstable state of the victims to make us feel as if we were the sixth witness dealing with the diner mishap. The collective tales of each individual brilliantly collaborate to tell the story of recovery through the loss of human life.

Johnny Depp REFUSES To Hand Over $86K The ACLU Wants For Complying To Amber Heard Subpoena!

Who Is Gungi, the Wookiee Jedi in The Bad Batch?