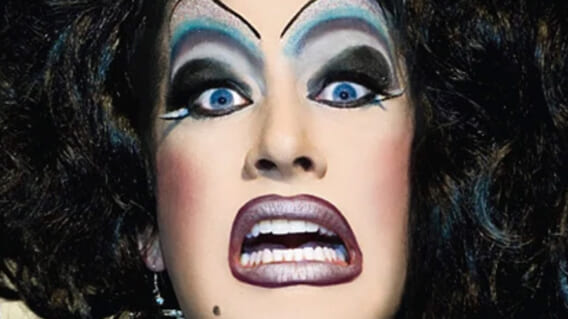 We here at Dread Central are massive fans of Peaches Christ and their splatter-happy 2010 ultra camp classic All About Evil. But tragically, after its world premiere at the San Francisco International Film Festival, All About Evil fled into camp cinema underground, becoming the stuff of legend. But fear not. This fully demented, blood-splattered classic is officially back for good, courtesy of the special edition Blu-ray release from Severin Films and a North American streaming release which happened via Shudder on June 13th.

To celebrate, we sit down with the world-famous drag queen and the star of her vital first feature film, genre favorite Thomas Dekker (A Nightmare On Elm Street). Check out our conversation with the stars right here:

Since the birth of the outrageous gore film, Peaches Christ has continued to become a queer household name, scaring and delighting audiences with eye-catching performances and midnight screenings. For the past two years, Peaches has hosted Midnight Mass with Michael Varrati (Tales of Poe, “Dragula”), a podcast based on Peaches’ long-running cult movie series in San Francisco. Every week, the pair go deep into discussions on the nature and fanbase of cult cinema, discussing everything from the works of Dario Argento to Rock N’ Roll High School to Matilda.

The All the Beauty and the Bloodshed issue – Out now!

Who Will Be ‘The Kang Dynasty’s New Avengers?

Listen to Bryan Christopher and Scott Drebit Discuss William Girdler’s ABBY, GRIZZLY, DAY OF THE ANIMALS, and THE MANITOU on a New Episode of CORPSE CLUB