Beetlejuice is back, baby! 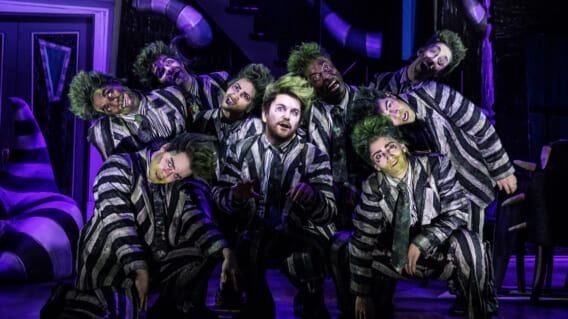 Beetlejuice is sacred for horror fans the world over, which is likely why the sequels and remakes have never materialized. How can you properly reimagine a classic that means so much to so many people? The answer: turn it into a musical.

What struck me within the first ten minutes of Beetlejuice: the Musical was that it was developed with a tremendous amount of love and respect for the original. The show encompasses all of the many facets of what made the movie great while expanding on the story in ways that are equal parts inventive and referential. It even has multiple nods to the cartoon which just plain made me happy.

Beyond that, the costumes, the music, the humor, the horror, and the insanely elaborate Burtonesque sets and visuals are an overwhelming and blissful experience for Beetlejuice fans. Plus the anarchistic spirit of lewdness and rudeness from the movie is retained in full force in the writing.

After a brief covid-induced hiatus, Beetlejuice is back on Broadway and we have a bunch of exclusive new pics from the revived production! Check them out in all their glory below with some quotes from the cast & creators.

“This is a great example of how we took some of the source material from the cartoon series of Beetlejuice. The story point here is that BJ is psyched that the Maitlands are about to die. But how could we show that in a totally blown out kind of way? The animated series was full of visual gags (mostly pun based) and so this was certainly an homage to the wild and zany cartoon side of our musical. Also…here’s a fun fact…the popcorn and soda are flown in daily from a small boutique snack shop just outside of Budapest. It’s the only way I can authentically play this moment. Sure, the audience would never know that…but I would. And I think it just really makes the moment work. I’m picky like that. I’m also kidding.”

“My favorite scenes from the animated “Beetlejuice” television series were the ones where Beetlejuice and Lydia tried to one up each other. And, in this picture, Beetlejuice is similarly trying to con Lydia and using every persuasive method he can think of to get her to say his name three times, but Lydia continually out-smarts him.”

“The iconic shot and line from the show. There was just no way we were going to leave “it’s showtime” out of the show. We’re not that crazy. Originally the line came right at the beginning of the show, but where it is now is so much more of a climactic moment. And it really hits with audiences…they go crazy for it. I love this part because it’s the moment BJ gets exactly what he wants. And there’s just something emotional for me about someone (or something) getting the thing they’ve yearned for. However, in this case, it’s used to a villainous end. Also…here’s a fun fact…I am inside that table for the entirety of the scene. No trap doors. No secret entrances. I’m wedged into that table for a solid 9 minutes.”

‘Let’s go home.’ “This line has a great significance in the show as Lydia is constantly questioning where she belongs and what home truly means. She is grieving the loss of her mother and in that grief feels incredibly isolated and alone. However, on her journey, she finds that there is love all around her and that family/home can be “a little unconventional.” This moment is her emotional release and as an actor I look forward to it each night. Lydia experiences a lot of pain throughout the show, and to let go of that huge weight is a beautiful thing. It makes me emotional each night—knowing that many can relate in some way. And to show that it is possible to come through the other side.”

The Best Hugh Jackman Movies to Watch Before The Son

Review: THE LAST OF US Addresses the Long Road of Grief on an Apocalyptic Scale

5 Anime to Watch if You Love Tokyo Revengers