The internet is a terrifying place. 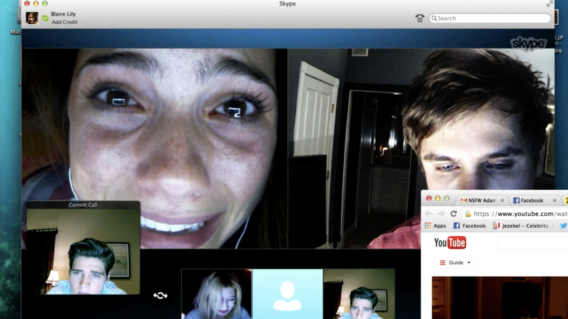 Al Gore’s internet. It’s a series of tubes that have given us both unlimited access to information and access to some of the most heinous things the world has to offer. As the digital age has consumed more and more of our daily lives, horror has, of course, taken to adapting that obsession into a new kind of found footage format. It’s one that goes inside the computer as it were, with desktops and Zoom calls dominating the frame. Ghosts and demons can’t be stopped by wires and the ethereal Cloud; in fact, they can infect us in larger numbers at unfathomable speeds (see Pulse as one of the first films to tackle such an idea). Human monsters have better access to us, and don’t even need to invade your house to inflict living hell. Whether you call it in-screen horror, second screen horror, or screen life, it all boils down to one thing: digital terror.

Recently, Jane Schoenbrun’s We’re All Going To The World’s Fair hit streaming and it’s a gorgeous mix of narrative and in-screen horror. Schoenbrun juggles the ennui born of digital isolation with Zoom calls, YouTube videos, ASMR, and more. It’s a gorgeous hybrid of what it means to exist as a young person online. In honor of this film’s release, we’re looking at ten other in-screen horror films that’ll make you think twice before joining that Zoom call.

Unfriended is a stone-cold horror classic of the 2010s period, but it also brought in-screen horror to the forefront. The new-to-most-audiences format seemed like a cheesy gimmick at first; how could watching a whole movie through Skype calls be scary? Well, director Leo Gabriadze proved it’s very possible. Six friends are on Skype when the mysterious “billie227” appears on the call. The user reveals itself as the spirit of Laura Barns who successfully attempted suicide a year ago after a viral video showed her drunk and pooping her pants at a party. Slowly, the spirit turns the friends against each other as they reveal horrific secrets, from infidelity to sexual assault. And the film features some absolutely horrendous kills, from a blender to the head to a curling iron being forced into someone’s mouth.

The sequel to Unfriended is just as brutal, if not more so. This time, there are no supernatural elements. Instead, Matias picks up a random laptop at a coffee shop (what is wrong with you, dude?) and soon discovers it belongs to a group of people who operate via the dark web. He finds haunting videos on the laptop and is threatened by the group to give the laptop back. The longer he refuses, the more friends of his they kill. It’s another brutal entry to in-screen horror.

The Den is one of the first in-screen horrors and it’s a doozy. In fact, Unfriended takes a lot of inspiration from this 2010 look at random chat sites like Omegle and ChatRoulette. Here, Elizabeth Benton is a Ph.D. student doing research on curating relationships online through random connections through chatrooms. The film is told exclusively through her computer as she connects with strangers around the world and has committee meetings with her academic advisors. But, when she witnesses a murder during her research, everything begins to unravel. Elizabeth is trapped in a web of something nasty lurking online and they’ll make her pay for discovering them.

Aneesh Chaganty‘s take on the in-screen format garnered praise not just from the horror community. John Cho stars in the film as a father going through his missing daughter’s computer trying to find out where she is. The film is entirely contained to screens in a new way of telling the typical detective story.

Mike Costanza‘s 2002 in-screen horror is perhaps one of the first if not the first film that dove into a new look at technology horror. The Collingswood Story, which is finally available thanks to Cauldron Films, involves a couple using webcams for the first time to stay connected. The interface is, obviously, very early 2000s and a massive throwback to only 20 years ago. Its interface is reminiscent of the days of dial-up internet. Costanza was way ahead of his time with The Collingswood Story. Found footage fans need to pick this one up.

If you want to be sad and absolutely gutted, Megan is Missing is the right choice. While not entirely in-screen, there are large portions of the film that take place in chatrooms and video calls where a predator is grooming two teenagers. Only, he’s posing as a fellow student to lure them into a false sense of security. This one is a disturbing watch so tread with caution.

Rob Savage and Jed Shepherd’s iconic pandemic movie so beautifully tapped into early COVID-19 anxieties without making a movie about COVID-19. Taking place over Zoom, five friends gather for a virtual seance. But they naively summon something evil that can easily bounce between girls thanks to a strong internet connection. The scares and effects the team is able to achieve are so impressive not only due to budget, but because it was all directed over Zoom.

Isaac Rodriguez is a name to watch in the found footage space. One of his latest, Deadware, expertly uses the in-screen format but with a strange retro video game. Set in 1999, Rodriguez gives a nod to The Collingswood Story as he adopts an early Internet aesthetic and friends who are new to video calls. As they play an online game to keep in touch, they stumble into something much darker.

A ratter is a person who hacks into an unsuspecting person’s computer and watches them through their webcam. In Branden Kramer‘s movie Ratter, it happens to Ashley Benson’s Emma, who is cyberstalked. We’re watching her just like the stalker, making the film feel even dirtier.

Not enough in-screen horror has tackled Twitch streamers and the world of live streaming. Michelle Iannantuono‘s film is told entirely through one guy playing a cursed video game and his live chat. It’s simple, effective, and damn scary.

Johnny Depp Bodyguard Says He Started To Notice Injuries On HIM, Not Amber Heard!

How to Pick the Best Digital Antenna For You