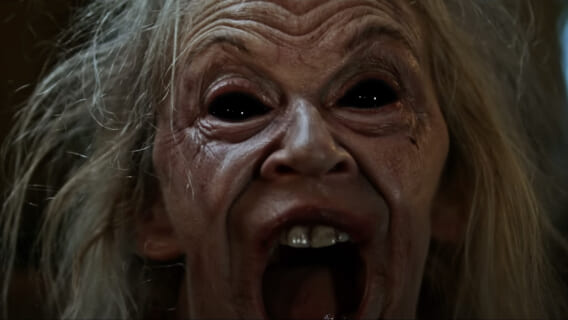 Somewhere over the rainbow, at least in the original Wizard Of Oz, was a beautiful place, an escape from monotony for the lonely Dorothy Gale. With her little dog Toto, she wished for an adventure, and she sure got one as she was transported to the land of Oz. But, what happened to Dorothy years after her return? The new upcoming film Gale: Stay Away From Oz has a few ideas, and none of them involve technicolor daydreams.

Long gone are the days of emerald cities and yellow brick roads. In this dark re-imagining of the Wizard of Oz, Dorothy Gale is now an elderly woman, broken by years of paranormal entanglement with a mystical realm, which has now echoed down to her only living relative, Emily, who is being called to settle unfinished business in this terrifying world of Oz.

Check out the chilling trailer below:

No sign yet of a deranged Tin Man, Scarecrow, or Cowardly Lion. But the poster does tease a sickly-looking scarecrow, the kind that haunts the best rural horror movies. Here’s hoping we get scenes with demented versions of the beloved characters.

With films like Return To Oz, we know that the classic tale can easily become a horror film. Even the original film can be seen as horrifying. Just look at those flying monkeys. With Gale: Stay Away From Oz, we’re finally diving headfirst into horror territory proper with this property.

Chloe Crump stars in the film as Emily Gale.

No word yet on a release date, but check back to Dread Central for more information as we get it!

Jeremy Renner Airlifted to Hospital, In ‘Critical But Stable’ Condition