Remember when Ruzek asked Burgess to move in with him last season? This week’s Chicago P.D. finally gave us an answer to that question, but not before Intelligence’s latest case sent them in pursuit of an escaped convict.

THE CASE | Ruzek took the stand in an appeal trial, where he was accused of illegally searching the defendant’s place and planting the gun that landed him in prison. The judge ruled in Ruzek’s favor, but being called a bad cop still stung. It didn’t help that before the ruling, Burgess assured him that he had nothing to worry about if the gun was in plain view. She didn’t mean anything by it, but he interpreted it as her not believing in him. 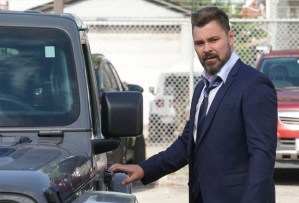 Things escalated when the defendant, Wilkin, escaped his prison transport and took a guard hostage. But security footage revealed that the guard — a woman named Tiana — was in cahoots with Wilkin after forming a romantic relationship with him.

Voight and Halstead were noticeably absent from Intelligence’s initial briefing on the case, and Halstead told Upton not to worry about it.

The squad eventually apprehended Tiana and later caught up to Wilkin, who shot a 10-year-old girl while stealing a getaway car. Ruzek tried to calm the girl down by giving her the small horse figurine Makayla gave him. But he and Burgess could only watch as the girl, who looked eerily like Makayla, died on the scene.

Thanks to Torres, Intelligence found a potential accomplice. Burgess and Ruzek knocked on the door and spotted a gun in a gym bag when the man answered. While Burgess pushed for them to move in, Ruzek deemed it too big a risk because he wasn’t sure. But Burgess ignored his second-guessing and told the team what she saw before kicking the door down. She was right about the gun but, unfortunately, Wilkin had already left.

THE CONCLUSION | Wilkin fled to the bus station, and Burgess tracked him to a bathroom on a bus. When he opened fire, she didn’t hesitate to shoot back, and she killed him on the spot. Case closed.

In the aftermath, Upton approached Halstead about his earlier absence. Will told her they were at Chicago Med, and Halstead revealed that they had his brother patch up Voight’s stitches and kept it a secret so the sergeant wouldn’t be sidelined. He wanted to keep her out of it since what they were doing was technically illegal. Later that evening, she sat in their apartment alone while he stayed with Voight at a bar. Are they OK?

Meanwhile, Ruzek finished Makayla’s bird house, but Burgess had some notes about his patio. It needed some lights and… a family. Yes, Burgess decided to move in with him. She also admitted she was wrong about him being unstable for Makayla.

“You’re stable with her,” she told him. “I believe in you, Adam. I do. And I’m sorry if it hasn’t always felt that way.”

The hour ended with the pair looking rather cozy: Burgess in Ruzek’s arms while he sipped his beer.

So, how are we feeling about this week’s Chicago P.D.?

‘We need better stories if we want to have better societies’