You know the story of the Watergate scandal, but you haven’t seen it told quite like this.

In Starz’s upcoming limited series Gaslit (premiering Sunday at 8/7c), the downfall of President Richard Nixon is explored from the perspective of his less-famous, but very power-hungry subordinates. But history, as we know, goes much deeper than that. Untold stories are unraveled, from the unhinged extremists who joined in to aid and abet the politicians’ crimes, to the whistleblowers who exposed the corruption and burned everything to the ground.

Taking the most prominent spot in the limelight is Martha Mitchell (Julia Roberts), a celebrity Arkansan socialite and wife to Nixon’s Campaign Chairman and former Attorney General John Mitchell (Sean Penn). Martha becomes the first person to publicly sound the alarm on Nixon’s involvement in the shady dealings of Watergate, which ultimately causes the presidency and her own life to spiral wildly out of control.

But the absolute standout is Shea Whigham‘s G. Gordon Liddy, a former FBI agent who takes lead on the Watergate espionage operation as part of Nixon’s 1972 reelection campaign. To call the guy “extra” would be an understatement. He follows his own strict and highly questionable moral code, which leads him to go to abnormal and illegal lengths to protect the president.

Here, Whigham talks to TVLine about what drew him to the project, working with Sean Penn and Julia Roberts, and the “insanity” that ensues for his character.

TVLINE | The Watergate story is such a well-known and documented tale in American history. What was it about this iteration that grabbed you?
SHEA WHIGHAM | It starts with Julia Roberts, obviously. Getting a chance to work with Julia again, I’ll take that any day of the week. And [director] Matt Ross. I was a big fan of Captain Fantastic. That was the best film I saw all year. When they offered me Liddy, I had a little bit of pause knowing how tough it was going to be to take on, but then I jumped at the chance. 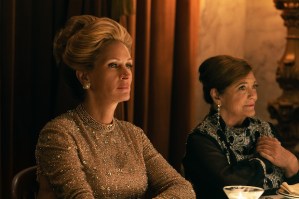 TVLINE | Liddy is quite the character! What aspects of this guy appealed to you?
I was really interested. I told Matt that I wanted to make sure we do him justice. That we give him a fair shake. I knew the “Greatest Hits” of Liddy. I knew the flame, the rats, the talk radio show… I knew a little bit, but I wanted to find the human being in there. I wanted to see if there was anything I could hang my hat on. How am I going to first approach him to play him? It was like, “Is there anything honorable?” and there was. There really was. He didn’t name names. He was the only one who didn’t name names. And I, like you, could probably respect that. I could start there. And when everyone else was jumping ship, he didn’t do it! I was also really taken with how he talks about his five kids and Frances, and how they met and his first dates with her.

TVLINE | What else did you do to prepare to step into his shoes?
With every role I take on, there’s tremendous amounts of research. I’m not big on talking about that aspect of it because I don’t want people to watch the character and go, “Oh, he did this and that to get in,” but there was a lot that went into this, months ahead of time, to try and find the man, so that from there, all the insanity can ensue. You’ve got to find something real and play the truth in order for where we take Liddy in Episodes 7 and 8 to land.

TVLINE | He seems to abide by his own strange amoral code. How does this guy’s unique belief system propel him forward?
It’s amoral to whom? To him, anything is justified in the name of the cause. Look, at its base, Liddy just wants to be recognized by the king, by King Richard, by the president. He wants that more than anything else. For him, anything is OK in the name of the cause, rightly or wrongly, so you have to play that truth. And in that, [Operation] Gemstone comes out of it, which is Coen brothers/Keystone Cop-esque. To him, it’s the smartest thing that anyone’s ever come up with. John Mitchell laughs him out of the room, which causes him embarrassment because at the root of everything is insecurity. He hasn’t felt secure in who he is since he was a baby. That insecurity bubbles up, and where does he get the sagest advice from? From his own son, that his teacher told him in school. So you get to see a different side of him. It’s not just the “crack heads,” and “I’ll do whatever.” You get to see a human being in there, I hope. 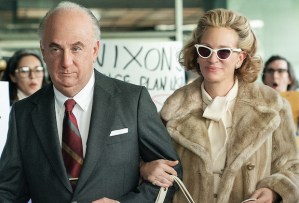 TVLINE | Liddy instantly takes to Chris Bauer’s character, James McCord. What can you tease about that relationship?
That’s interesting. Matt and I talked a lot about that scene [in the premiere]. I wanted the unspoken-ness to happen there. Where you see someone, and it’s two animals coming together and going, “I’ve found the guy.” I think you feel that in that [first] scene with McCord. [Liddy] thinks he’s found someone that will go into battle with him. I really like that scene. It was written differently, then at the end of the day I said to Matt, “I think it’s really simple. It’s really two soldiers, and Liddy knows he’s found someone.” He thinks he’s found someone. Which, I’ll just say, it doesn’t turn out to be that way.

TVLINE | I know you mentioned Julia earlier, but I’d be remiss if I didn’t mention that this cast is absolutely stacked. Were you aware of the caliber of talent involved before you signed on?
Yeah, I knew that Julia and Sean were in place. I had worked with both of them before and I would do it over and over again. Julia means a lot to me in my career. One of the characters I love most was in [the Prime Video series] Homecoming. She’s a producer, so she puts a lot of things together. When Liddy came up, she has to give the blessing and she put me front and center. I’m thankful for that. And Sean — I tell everyone — I had his poster on my wall, unabashedly. I wanted to walk like him, I wanted to talk like him, since Bad Boys and Spicoli and everything. Betty [Gilpin], Dan [Stevens]… Matt put together an amazing, A++ cast.

TVLINE | By the end of the series, what do you want people to take away or learn about Liddy?
When I get asked these questions, I’m not sure what I want them to take away. Maybe they come into it feeling one way about him. We all have baggage, especially him, because he has everything from Miami Vice, to the shock jock [years], to the Leary lectures, but hopefully they see a human being. Hopefully they see that in there, and they get something different than they thought. But also, it’s just an exciting story. The way that we tell it, it’s funnier than I thought, it’s more brutal in places than I thought, and it’s touching, like when Sean and Julia go back to when [the Mitchells] met each other for the first time. It’s really touching, man.

Was ‘This Is Us’ Final Scene Lackluster? Did Kevin Act Again? — TV Questions

Eleven Is Stuck in a California Nightmare (RECAP)

'Paws Of Fury: The Legend Of Hank' Trailer - Video