The following contains spoilers from The Guardians of the Galaxy Holiday Special, a Marvel special presentation now streaming on Disney+.

Disney+’s The Guardians of the Galaxy Holiday Special was by-and-large and by design a candy-colored, 40-minute confection. A holiday folly if there ever was one. And yet it did deliver a medium-sized reveal that should carry over into at least one future MCU project.

Early on in the Marvel special presentation, when Mantis (played by Pom Klementieff) is lobbying to seek out a very special Christmas gift for a melancholy Quill (Chris Pratt), she privately and casually mentions to Drax (Dave Bautista) her “secret” that he and only he knows — that she and Peter share a father in Ego (played in Guardians Vol. 2 by Kurt Russell).

Recounting why she has withheld this information thus far, Mantis tells Drax, “Peter’s father… our father… killed his mother and tried to kill him. I don’t want him to be reminded of that every time he sees me.” 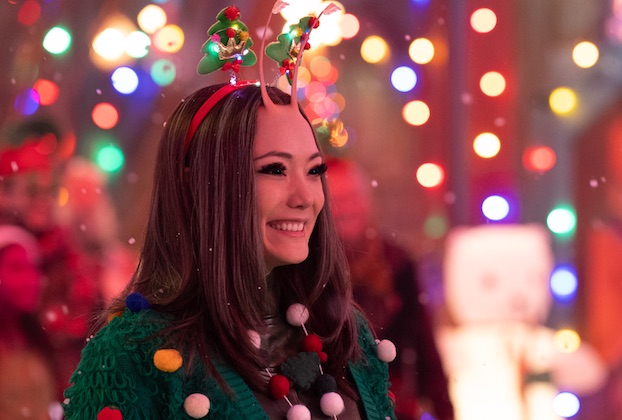 And yet at the end of The Guardians of the Galaxy Holiday Special, after delivering Footloose star Kevin Bacon (if not Ren McCormack himself) to Quill, Mantis finally disclosed to her half-brother their connection.

“Your father, Peter, he might be… he might be… he is… my father, too,” she revealed. To which a happily surprised Quill said, “Mantis, that’s the greatest Christmas gift I could ever get!”

The Mantis-Quill connection is not entirely surprising, if at all. Fans have long speculated about their shared paternity — sparked in part by a blink-and-you-missed it image from Vol. 2, which depicted Ego’s myriad hook-ups, but also by a quickly deleted social media post by an actress who said she played “Mantis’ Mom” in a deleted scene from he first sequel.

And, indeed, Guardians Vol. 2 was where this sibling bond was originally to be revealed.

Klementieff went on to say, “It’s nice that it’s out there now” because “it creates more layers and a special and beautiful, bond between the two characters.”

As individuals, Mantis and Quill “can feel so isolated and gloomy,” Klementieff noted, but moving forward — Guardians of the Galaxy Vol. 3 is set to hit theaters May 5, 2023. — “this creates something pretty special between the two of them.”

The Guardians of the Galaxy Holiday Special also introduced to the MCU Cosmo the Spacedog (voiced by Borat Subsequent Moviefilm‘s Oscar-nominated Maria Bakalova)… revealed that Quill & Co. have been living in the Head of Knowhere… gifted Rocket with Bucky’s vibranium arm (A+ Infinity War callback!)… and unveiled the titular team’s new spaceship, which is named after (David) Bowie.

What did you think of The Guardians of the Galaxy Holiday Special?

Ben Savage to Run for Congress

Fire Country Round Table: Is Bode Making Things Worse for Himself?