‘La Brea’ Mystery Solved: How Did Eve Get Shearling Coat Back From Mine?

Prepare to sleep peacefully this weekend, because TVLine has cracked the La Brea mystery that has caused many a restless night.

If you are not familiar with my intrepid chronicling of the cozy shearling coat that Eve Harris pretty quickly acquired in Season 1 after landing in 10,000 B.C. (tl;dr Natalie Zea was very cold in Australia), the gist of the latest head-scratcher is this:

In the fifth episode of Season 2, Eve, Gavin, Izzy and Sam KO’d some Exile guards inside the mine, then changed into the goons’ medieval-y, hooded uniforms — seemingly leaving their go-to outerwear behind. 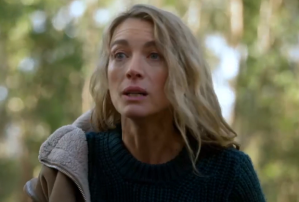 And yet in the following episode, as Eve, Izzy and Sam watched an unconscious Gavin get dragged by Lazarus guards into the shiny tower, Eve casually reached down to grab and slip back on her trademark shearling. And yet, no one — repeat, no one — had had opportunity to return to the mines and collect everyone’s discarded garb.

But as La Brea showrunner David Appelbaum confirmed for TVLine, that is because… no one needed to!

“That was something that we talked a lot about — how do we get back their clothing?” after Eve & Co. changed into the guards’ uniforms, Appelbaum said.

The answer: Just have them bring it with them. 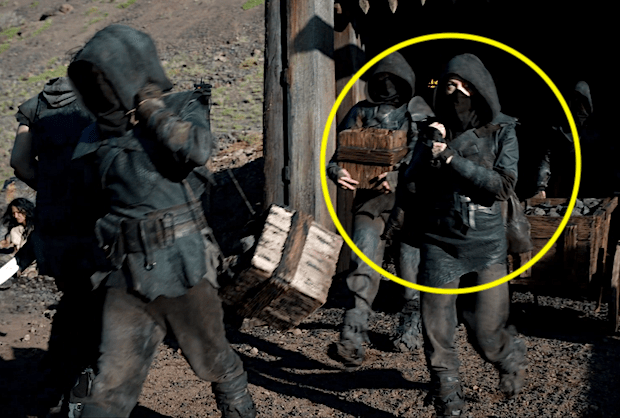 “You might notice that when they leave the Exile camp, they have a bag with them. That’s where all their clothing was,” Appelbaum explained. (See screenshot above.) As they then headed to Lazarus with a cart full of black rock, “It was in the back of the wagon. And in Episode 6, when you had Levi and Scott watching the attack by the building, in our minds they had the bag with them at that point, so they could get the clothes later.”

The next mystery to tackle: Why Eve wore the warm shearling whilst visiting Los Angeles circa 1988.

Want scoop on La Brea, or for any other show? Email InsideLine@tvline.com and your question may be answered via Matt’s Inside Line.

Harrison Ford Is Back In First Look at ‘Indiana Jones 5’

Dead to Me Season 3: No, We Aren't Over [Spoiler]'s Death