‘Moon Knight’ Love Interest Was Almost Echo — Why It Was Changed

Moon Knight‘s Marc and Steven almost shared a different romantic interest — one who wound up on a different MCU TV series instead.

As a guest on the Ringerverse’s House of R podcast this week (starting at the 1:55:00 mark), Moon Knight head writer/executive producer Jeremy Slater shared with co-host Joanna Robinson some of the original pitch for what would wind up being Disney+’s fifth live-action MCU series.

“There were a lot of specifics in the pitch that didn’t wind up working in the show,” Slater said. For example, “Bushman was initially going to be the main villain,” as the mercenary memorably was in some of the Moon Knight comic book runs. “I thought he was going to be possessed by an Egyptian god by the end of it, and you’d have a big sort of avatar battle.”

(I’m not sure if Slater or anyone has ever confirmed as much, but the conventional wisdom is that Bushman was deemed too similar a character to Black Panther foe Killmonger; ergo the decision to go with Arthur Harrow, a very minor character from the comics, instead.)

Bushman, though, was mentioned in passing in Moon Knight Episode 5, when Marc explained to Steven that his former CO led the slaughter at the archaeology dig where Layla’s father worked/perished. 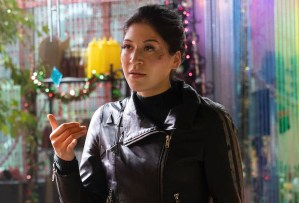 Another change-up from the original pitch involved the gents’ love interest.

“At the time, Echo was go to be our love interest, solely based on the fact that they knew Marvel liked the character of Echo and was trying to find a show to put her in,” Slater shared. And though Echo aka Maya Lopez was among Marc’s love interests in the comic books, “she didnt work at all for the story we were telling,” Slater explained.

Luckily, Marvel felt the same. “They were like, ‘You know what, we’ve got this Hawkeye show and we feel like she would fit in a lot better there…,’” the EP related, “and we were like, ‘Oh, thank God.’”

Maya/Echo was eventually played on Hawkeye by Alaqua Cox, and is now bound for her on spinoff series, while Ramy‘s May Calamawy was cast on Moon Knight in the role of Marc’s wife, archaeologist/adventuress Layla El-Faouly — a variation on the comic books’ Marlene Alraune.

All told, Slater told House of R, “There were a thousand things that were radically different about that initial pitch.”

Want scoop on Moon Knight, or for any other Disney+ MCU series? Email InsideLine@tvline.com and your question may be answered via Matt’s Inside Line.

Human Horrors Abound in 'Cut to Care' by Aaron Dries