For one of CBS’ more explode-y shows, NCIS: Los Angeles also knows how to deliver an emotional bang, as it did with Sunday’s night’s Season 13 finale.

A year ago, the finale featured an in-the-flesh appearance by Linda Hunt’s Hetty, building to Nell and Eric’s decision to leave the team and pursue other opportunities.

This time around, amid the search for the creator of a remote-controlled vehicle that was armed to the teeth and going around robbing places, personal moments permeated individual storylines.

For one, early in the hour, Kensi and Deeks got word that they had been approved to foster Rosa Reyes — starting, um, that evening!

Elsewhere, Sam and his father did some more bonding — including as Raymond shared for a first time that he once had a female suitor, but he didn’t want to “disrespect” Sam’s late mother. Raymond in turn urged Sam to not make the same mistake, given that Michelle would have wanted him to be happy.

And on a more whimsical note, Fatima helped Rountree with his dating life, beginning with a heavy critique of his wildly inaccurate dating app profile. 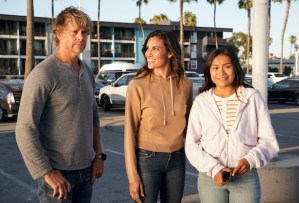 Once the Case of the Week was resolved, an excited Kensi and Deeks went to pick up Rosa, only to have the moment interrupted by a phone call from Kilbride, who insisted on an ASAP meet-up with his agents. Rosa was cool about the curveball, but when the new family arrived at the rendezvous point, they found a “Welcome, Rosa” beach party waiting for them, orchestrated by Kilbride (who was working the BBQ like a pro).

The get-together brought on smile after smile, as everyone welcomed Rosa to the extended NCIS “family,” and as we came to see that Kilbride was seated at a table with Raymond and… Arkady. When Anna’s father commented that whereas they were once on “different sides of the Cold War, today we are komrades… sharing some very fine cow,” 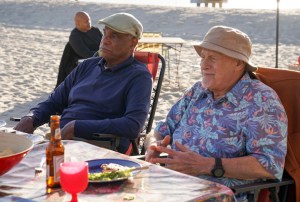 Kilbride responded, “I don’t know that we are ‘komrades.’ I do know that it you ever slip back into any of your old professions, I will lock you up” — harshing Arkady’s mellow just a bit.

We then got one of those season-ending scenes where Callen and Sam reflect on the “crazy few months” gone by, deep fakes included. (A nice thing about NCIS: LA is the characters never act like their work/storylines are ordinary.) Callen acknowledged that he needs to talk to Hetty at some point about all his other stuff, but then their attention turned to Anna who was playing cornhole with Kensi nearby….

Callen led Anna some yards down the beach, and with the (actual, Magnum P.I.!) sun beginning to set behind them, he said, “In every aspect of my life, I didn’t know who I was until I met you.” With a nod to something Anna had expressed a wish for earlier, he continued, “I don’t know that I can give you the normal life that you’re looking for… I’m broken — as far back as I can remember I have been. I want to give you what you want, but I need you to know–”

Anna jumped in to say, “It’s not a big secret that you’re broken, Callen — and guess what, so am I. That’s why we fit. Other people may never understand our ‘normal,’, but that doesn’t matter. It just has to make sense to us.”

And after the two traded heartfelt ILYs, Callen got on bended knee and took out a ring box to  propose to his Anastasia, as a properly excited Kensi alerted everyone else to what she was witnessing  going on down by the water.

Anna said yes, even Arkady could be seen beaming, the gang cheered, many hugs ensued, and then Sam toasted the newly engaged couple, saying, “May you dodge all the bullets and have a super-successful life and a beautiful family.”

Want scoop on any NCIS series? Email InsideLine@tvline.com and your question may be answered via Matt’s Inside Line.

Actors Who Nailed And Failed At An Accent In Films

What Would U Choose?