Warning: The following contains spoilers for Tuesday’s New Amsterdam. Proceed at your own risk!

We’ve got good news and bad news, “Sharpwin” fans: On Tuesday’s New Amsterdam, Max and Helen took a big step forward in their relationship… and then suffered a devastating blow.

Following last week’s cliffhanger, it was revealed that Helen (along with Casey, Dr. Wilder, Dr. Castries and Trevor) were all drugged by a bartender who was angry about the toll COVID took on his business when, according to him, it was just a bad cold. He blamed medical professionals for exaggerating its effects, so he spiked the group’s drinks. But that’s enough about Adam Rose’s terrible bar owner. 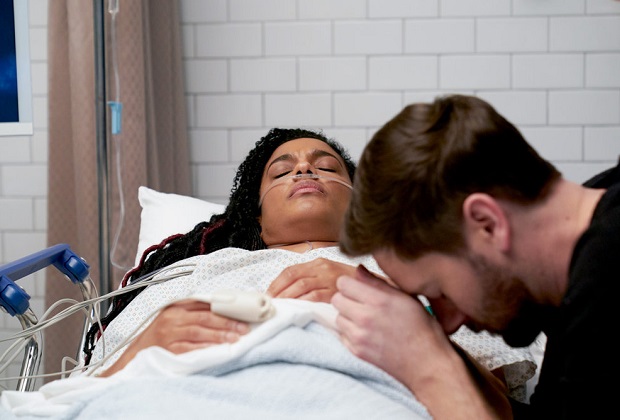 After Max found an unconscious Helen on the floor, he rushed her to the hospital, where they learned that she was suffering from many blood clots throughout her body. Among the surgeries she would need was a hysterotomy, which gave Helen pause. While Max pushed for the procedure to save her life, Helen argued that it would fundamentally change who she is as a person, not to mention the fact that she wouldn’t be able to have children. (And yes, Max reassured her that he very much wants to have a baby with her.) Ultimately, Helen went with a different, risky course of treatment, which worked in eliminating some blood clots. But things then took a turn for the worse, and Helen was rushed off for an emergency procedure. When she woke up toward the episode’s end, she struggled in anguish to respond to Max.

The doc has lost the ability to speak, and “we don’t know if she’ll get it back, ever,” executive producer Peter Horton adds. “[It] might take a week, might take two years, may never happen. And that’s the stakes of that story. A love that’s just burgeoning and about to consummate, it’s a good early challenge for their dedication and fidelity to each other.” 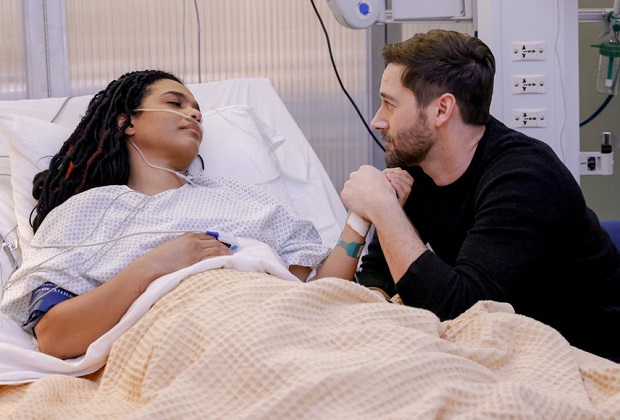 Helen’s medical crisis presents her and new fiancé Max (more on that in a bit) with a question they haven’t had to tackle before. “It’s so easy when you’re in love with somebody, and everything’s before you, and it’s all potential, and you have this whole plan mapped out in your head,” Horton says. “And then suddenly, for whatever reason, somebody, the partner, may be incapacitated for that future. What does that do to your system? What is love under those conditions? What is dedication and fidelity when that happens? And that, to a degree, is a question Max has to face.”

So alas, it seems the bloom may already be off Helen and Max’s very recent engagement. But let’s look on the bright side, shall we? “Sharpwin” are indeed officially betrothed after an impromptu proposal, during which Max popped the question while Helen was in an ICU hospital bed. It wasn’t how he envisioned it, but the sincerity was there, as was Helen’s genuine happiness when she said yes.

“I mean, it never goes as planned. I can only speak for myself. When I proposed to my wife, I had grand plans in Florence, Italy, to propose on the Ponte Vecchio, and every time I got close to proposing, I chickened out and I couldn’t do it,” Schulner shares. “And as a result, I couldn’t sleep at night. So one night at three in the morning, I just woke up my wife and said, ‘I’m not going to be able to sleep unless you marry me.’ So I woke her up, proposed, and then, finally, I was able to go back to sleep. So I wanted to give Max and Sharpe an equally memorable but not as planned proposal story.”

And then, of course, the other shoe dropped. Exclaims Horton: “For him to be right at that moment of, ‘I’m proposing to you, we made it through this year OK,’ and then boom, she can’t speak!”

New Amsterdam fans, what did you think of Max’s proposal? And how worried are you about Helen? Plus, stay tuned to TVLine for more scoop!

A Bunch of Amateurs review – A Brit documentary full of heart