It’s a little late for Halloween, but Netflix’s new spin on the Addams Family franchise, Wednesday, is still a welcome sight. Armed with the backing of Tim Burton and a killer trailer, Wednesday — premiering, when else, next Wednesday, Nov. 23 on the streamer — looks like a worthy extension of the classic creepy family. But based on the four episodes I’ve seen, a potentially fun spinoff has been given the Riverdale treatment, shoving the Addams Family characters into a supernatural teen drama that’d be more at home on The CW or Freeform. It does have a properly macabre tone and a fantastic lead performance from Jenna Ortega, but the choice to go full YA, I’m afraid, might have been a fatal mistake. 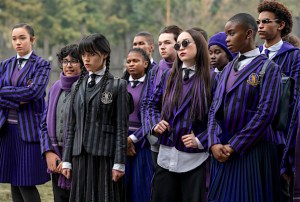 When we meet Wednesday Addams, played here by Ortega, she’s a student at squeaky-clean Nancy Reagan High School… and no, she doesn’t fit in there. (To exact revenge on some water polo bullies, she drops a bunch of piranhas in the school’s pool.) So Wednesday gets sent away to Nevermore Academy, a private school for outcasts where her parents Gomez and Morticia once attended. The new school is brimming with supernatural freaks, from werewolves and vampires to sirens and gorgons — but somehow, Wednesday still stands out as the morbid, death-obsessed weirdo. The school has plenty of secrets hidden within its walls, though, starting with the mysterious killer in the woods that’s been tearing hapless victims to shreds.

Wednesday does have a sharp bite to it, capturing the Gothic charm of the Addams Family movies. Ortega is terrific as Wednesday, nearly equaling the deadpan perfection of Christina Ricci with her deliciously dark one-liners. (“Sartre said hell is other people. He was my first crush.”) Catherine Zeta-Jones is also exquisitely well-cast as Morticia, but Luis Guzman doesn’t really work as Gomez — and that doesn’t matter all that much anyway, because the rest of the Addams family are limited to mere cameos, except for disembodied hand Thing. This is Wednesday’s show, and the rest of the characters don’t quite measure up, although Gwendoline Christie (Game of Thrones) clearly understands the assignment as the school’s meddlesome Principal Weems. Ricci herself pops up as dorm mom Marilyn Thornhill, which is a cute bit of stunt casting, but she isn’t given much to do. 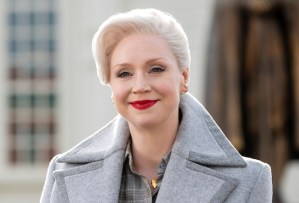 The tone and visual style of Wednesday are absolutely on point, with Burton — who serves as executive producer and directs the pilot — bringing his trademark ghoulish glee to the project. But the storytelling from Alfred Gough and Miles Millar (Smallville) lags well behind. The plot is cluttered and chaotic, with mysteries piled on top of mysteries. We have Wednesday planning to escape the school, plus her newfound psychic visions, plus the aforementioned mutilated corpses, plus multiple interchangeable floppy-haired love interests, plus Weems’ weird grudge against Morticia… it borders on overkill, as wonderful as that word might sound to Wednesday. (She also has superhuman combat skills somehow, which… OK.) Plus, the show attempts to bring a depth to the character of Wednesday Addams… that I’m not sure we want? As a side character with pithy punchlines, she’s perfect, but as a main character with an emotional arc, she’s lacking. (Wednesday Addams and emotions do not mix.)

In its structure and tone, Wednesday is actually closest to another Netflix drama, the late Chilling Adventures of Sabrina, but it’s missing that show’s dark magic. Ortega is truly great as Wednesday — she’s a star in the making — but the show slows to a crawl when she’s off-screen. In the end, it feels less like an Addams Family show than yet another disappointingly familiar YA murder mystery trying to piggyback off of well-known IP. The most damning thing I can say about Wednesday is that Wednesday Addams herself would probably hate it.

THE TVLINE BOTTOM LINE: Netflix’s Wednesday has a ghoulish tone and a superb lead performance, but the story is strictly cookie-cutter YA mystery.

Is Kim Kardashian's Cryptic Post About Pete Davidson Moving On?!