“Let the world know your name!!” GKids has revealed the main US trailer for Inu-Oh, the latest totally wild new film from Japanese anime director Masaaki Yuasa, known for his vibrant animation The Night Is Short Walk on Girl, Lu Over the Wall, and Ride Your Wave. This premiered at the 2021 Venice Film Festival last year (watch the teaser trailer from then) as a special screening, and it’s opening in the US in theaters this August. Based on a classic story about the life of Inu-Oh “King Dog”, a 14th-century Japanese performer of music drama at the time of its transition from the folk art of sarugaku “monkey music” into the formalized traditions of Noh and kyôgen. The story is about the friendship between a blind musician named Tomona, and a physically deformed dancer named Inu-Oh, who achieve great success and fame working together. The film’s original Japanese voice cast features Avu-Chan and Mirai Moriyama. It is a “glam-rock ode to the power of music and a forceful statement on artistic freedom from one of animation’s singular talents.” This is a fabulous trailer that really captures the eccentricities and wackiness of this anime musical. 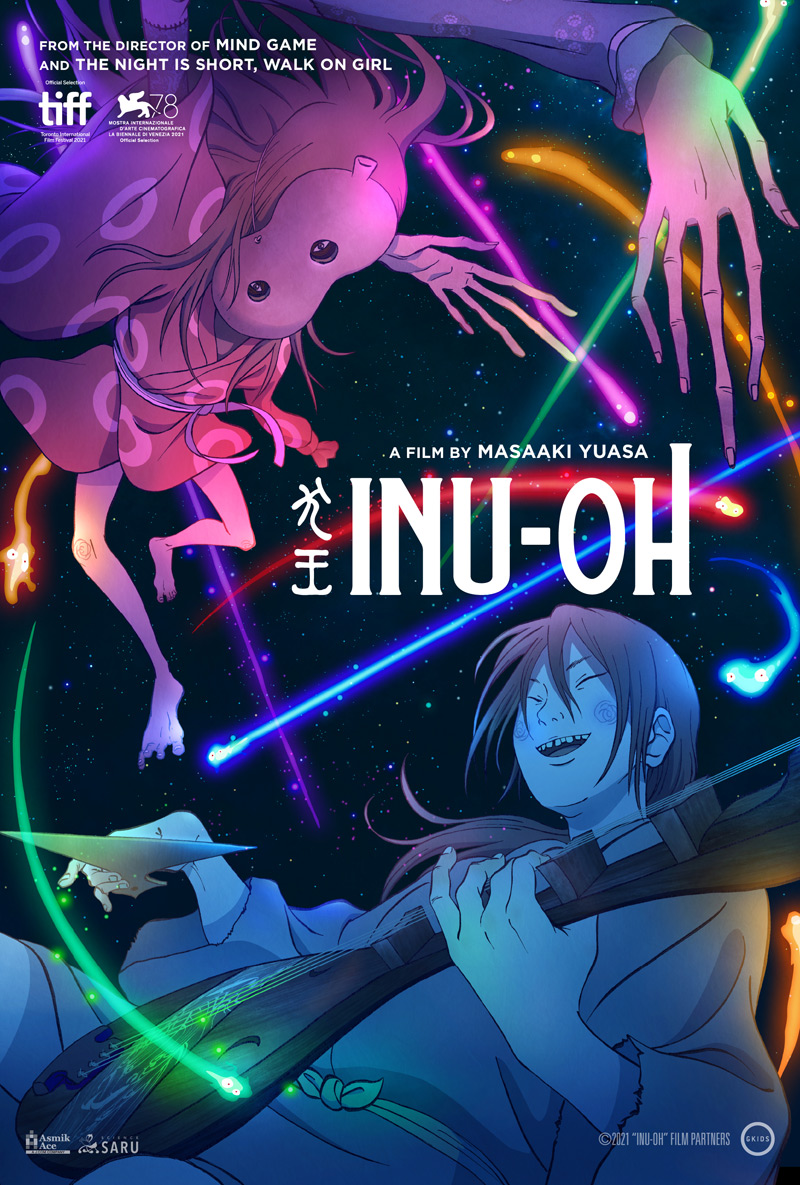 You can rewatch the first Japanese trailer for Masaaki Yuasa’s Inu-Oh right here, for the first look again.

Inu-Oh was born with unique physical characteristics, and so every last inch of his body is covered with garments, including a mask on his face. One day, he meets a boy named Tomona, a blind biwa player, and as Tomona plays a delicate song of tangled fate, Inu-Oh discovers an incredible ability to dance. Inu-Oh and Tomona become partners & inseparable friends, using their creative gifts to survive on the margins of society, as song after song gain them notoriety and propel them to stardom. Through the songs, Inu-Oh mesmerizes his audiences on stage, and gradually begins to transform into someone of unequaled beauty. But why is Tomona blind? And why was Inu-Oh born with unique characteristics? It is a story about the friendship of Inu-Oh and Tomona, who dance & sing to get to the truth and break each other’s curse. Inu-Oh is directed by acclaimed Japanese filmmaker Masaaki Yuasa, of the films Mind Game, Genius Party, The Night Is Short Walk on Girl, Lu Over the Wall, and Ride Your Wave previously. The screenplay is by Akiko Nogi, adapted from Hideo Furukawa’s Tales of the Heike: Inu-Oh book. This initially premiered at the 2021 Venice Film Festival last year. GKids will debut Yuasa’s Inu-Oh in US theaters on August 12th, 2022.

The All the Beauty and the Bloodshed issue – Out now!

Jeremy Renner In Critical But Stable Condition After Accident

”With film, I used to be the first person to see a performance”