“Now is the time to leverage our power.” Roadside Attractions has revealed their trailer for the rousing new political documentary film To The End, which originally premiered at the 2022 Sundance Film Festival earlier this year. This doc is the highly anticipated follow-up to the AOC doc Knock Down the House from a few years ago, also focusing on young female politicians in the United States. Stopping the climate crisis is a question of political courage, and the clock is ticking. Filmed over four years of hope and crisis, To The End captures the emergence of a new generation of leaders and the movement behind the most sweeping climate change legislation in U.S. history – the “Green New Deal”. Award-winning director Rachel Lears follows four exceptional young women—Rep. Alexandria Ocasio-Cortez, activist Varshini Prakash, climate policy writer Rhiana Gunn-Wright, political strategist Alexandra Rojas— as they fight to shift the narrative around climate, revealing the crisis as an opportunity to build a better society. Let’s hope this film can make a difference! I’m not sure this film alone will change anything, but the people it’s about can. Check this out.

Here’s the first official trailer (+ poster) for Rachel Lears’ doc To The End, direct from YouTube: 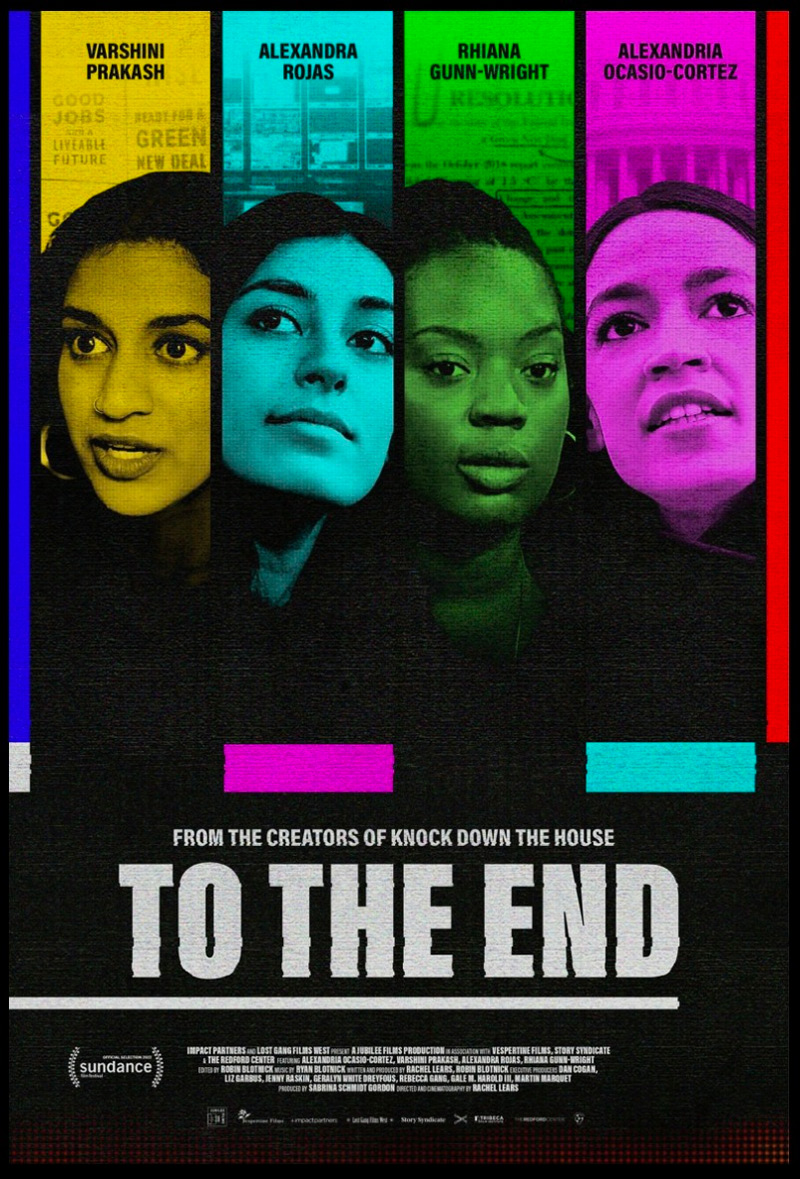 A sequel to 2019’s Knock Down the House, the documentary feature To The End follows the intersecting stories of four visionary young women of color who are environmental leaders on the front lines of the fight for a Green New Deal—a bold and ambitious plan to stop the climate crisis and make racial and economic justice part of the solution. The film’s heroes—Varshini Prakash (Sunrise Movement), Alexandra Rojas (Justice Democrats), Rhiana Gunn-Wright (Roosevelt Institute), and Representative Alexandria Ocasio-Cortez—are each grappling with new challenges of leadership and power in the face of cynicism and uncertainty. Over four volatile years of crisis & upheaval, from street protests to the halls of Congress, the film tracks a historic shift in climate politics in the U.S. as these young leaders work together to defend their generation’s right to a future. A coming-of-age story for a movement, To the End gives audiences an unflinching look at how power works in today’s America, and a front seat view of history in the making.

To The End is directed by American documentary filmmaker Rachel Lears, director of the doc films Birds of Passage, The Hand That Feeds, and Knock Down the House previously; also a cinematographer for many other doc projects. Produced by Robin Blotnick, Rachel Lears, and Sabrina Schmidt Gordon. This initially premiered at the 2022 Sundance Film Festival earlier this year, and it also played at CPH:DOX, Hot Docs, and the Tribeca Film Festival. Roadside Attractions will debut Lears’ doc To The End in select US theaters starting on December 9th, 2022 this fall. For more info, visit the film’s official site. Anyone interested?

Live your Wes Anderson-inspired fantasy at an east London hotel

‘The Mandalorian’ Is Back in New Season 3 Trailer