“Why don’t you ever come when I call you?” Ahaha what a jolly, ginormous bovine queen! The Film Forum in NYC has revealed an official US trailer for a funny French documentary film called Vedette, yet another documentary about a cow. To go along with Andrea Arnold’s Cow released earlier this year. This premiered last year in Cannes, and played at IDFA in Amsterdam as well. Here’s the pitch: “Vedette is a cow. Vedette is queen. She was even once queen of the queens of the Alps. But Vedette is getting older. In order to save her the humiliation of being dethroned by young rivals, our neighbors, Elise and Nicole let us look after her for an entire summer. This is where our vision changes: our vision of the cows, of our local neighbors, in short, our vision of the world.” Sounds good to me! Another fascinating entry into the animal docs subgenre. The exuberant “moo!” when talking about not eating meat is so perfectly placed – you have to see it for yourself. 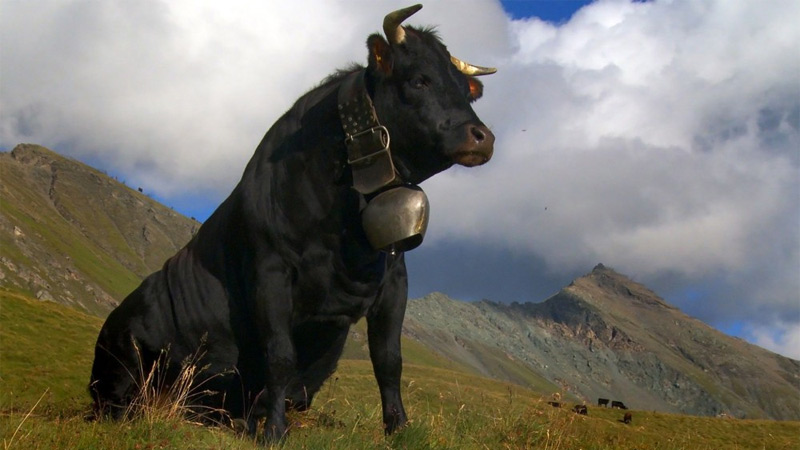 Via The Film Forum: “Who didn’t grow up loving Ferdinand*, the bull who just wanted to smell the flowers and who refused to fight? Vedette, on the other hand, is a Swiss Hérens cow, an aggressive breed whose females compete by locking horns (no damage is done) and who has been Queen of some spectacularly beautiful Alpine pastures her entire life. The Queen grazes on the best grass and is hand-fed loaves of bread by Elise and Nicole, two women who have doted upon her for a lifetime. But now Vedette is old; and they are confronted by the kinds of existential issues we all face at the fading of the light. Reading Descartes to their beloved cow and playing music by Bizet and Mozart all figure into the equation. Anyone who has ever lived with an animal will be drawn to Vedette’s awesome presence and innate dignity and will empathize with the people who adore her.” Vedette is co-directed by filmmakers Claudine Bories & Patrice Chagnard (both of the docs Le Convoi, The Arrivals, Rules of the Game). This initially premiered at the 2021 ACID Cannes sidebar last year. Film Forum will debut the film in select theaters starting June 24th, 2022 this summer.

Cast, Plot, Release Date, and Everything Else We Know

Wakanda Forever Producer On How the New Black Panther Was Chosen

Would These Celebs Make Nice Neighbors