Review: Nicolas Cage in ‘The Unbearable Weight of Massive Talent’

Review: Nicolas Cage in ‘The Unbearable Weight of Massive Talent’

More often than not, good actors end up with a “bad” reputation because of their “less enjoyable” cinema projects, and the opposite is also possible, albeit in fewer numbers. The truth is that the general idea that literally all Hollywood celebrities live an above-average life without financial, personal, or family problems is somewhat misleading. Nicolas Cage is a perfect example of an incredibly talented actor who, due to the obstacles life confronted him with, was “forced” to participate in “smaller jobs” in order to solve complicated situations. Writer / director Tom Gormican’s film The Unbearable Weight of Massive Talent is the quintessential tribute to the iconic career of someone who has always managed to elevate films he’s been in.

Directed by Tom Gormican and written by Gormican and Kevin Etten, The Unbearable Weight of Massive Talent can be described using adjectives that flawlessly define Cage’s filmography and qualities. It contains a story that’s as absurd as it is hilarious, filled with ridiculously irrational moments, which nonetheless offer tremendous entertainment value. Relying on the lead actor’s gloriously impressive overacting to captivate viewers from start to finish, Gormican takes Cage through the ups & downs of his career, packing the movie with brilliant references to past works, as well as many of his beloved characters and memorable dialogue.

However, the biggest highlight of Massive Talent is the palpable, extremely fun chemistry between Cage and Pedro Pascal. The two real-life friends come together in a film where creative freedom and improvisation are both necessary and remarkable, as are the dedication and delivery of each actor. Their interactions are fascinating, causing a lot of laughter with audiences. Seeing the two characters grow fond of each other over their passion for cinema offers a somewhat gratifying feeling for viewers who also intensely live this art. As much as Pascal is fantastic as Javi, a Cage fanboy who dreams of making a movie with the superstar, only Nicolas Cage could play Nick Cage in the insane, expressive, enthusiastic manner this “character” deserves. 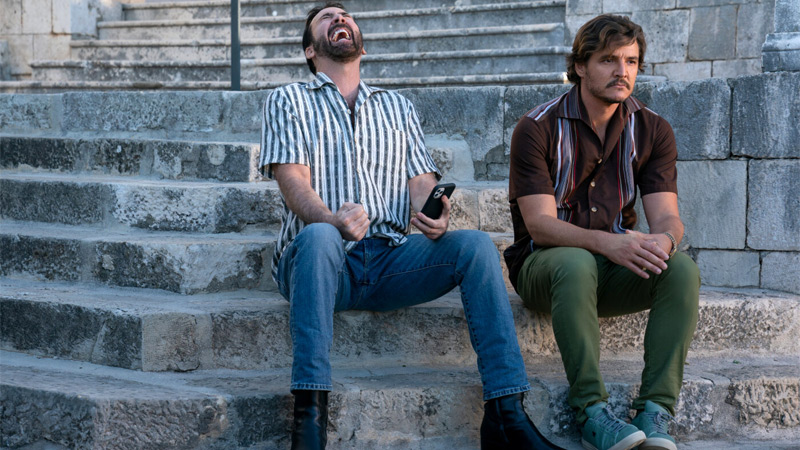 If there’s one thing that can never be used to attack the actor, it’s his unparalleled commitment to every role he’s accepted throughout his career. I wish most actors in Hollywood had the same devotion and love for the respective art that Cage has. Massive Talent is genuinely a love letter to someone who has given his all to film but, unfortunately, isn’t as acclaimed or respected (anymore) as they certainly deserve to be. Watching Ripley from Wild at Heart as a fragment of Cage’s imagination is the best thing viewers will get when it comes to career references, but there’s also a crazy “collector” moment that takes the audience through the masterpieces and unknown gems of his filmography, which I hope will prompt some additional curiosity.

Now, regarding the question in the minds of some readers: for those unfamiliar with the actor’s work (is this even possible with so many movies?!), can one still enjoy Massive Talent? Not as much as others, but there’s enough entertainment to please moviegoers with less knowledge of Cage’s life / career. Apart from a subplot involving CIA agents that proves useless and uninteresting, the screenplay actually contains some surprising elements, whereas some cliches and formulas are used on purpose when linked to something of the actor’s past. It’s, in fact, a “character-driven” movie, just like the two protagonists wanted their dream project to be.

Gormican’s The Unbearable Weight of Massive Talent is an admirable tribute to one of the most iconic actors of his generation: Nicolas Cage. A hilariously insane, absurd journey through a career filled with unforgettable gems, this movie is equally ridiculous without any creative constraints. From the numerous delicious references to past work and his many characters, to the phenomenal chemistry between Pascal and Cage, it might be more complicated for viewers unfamiliar with Cage’s life and filmography to get carried away by the chaotic, naturally exaggerated atmosphere. Regardless, witnessing Cage play himself is worth the ticket price. Endless entertainment for fans of a pure talent that deserves much, much more acclaim.

Woman Charged With Fatally Stabbing Husband After Dispute Over Coffee… And Drinking Bleach?!

Woman Charged With Fatally Stabbing Husband After Dispute Over Coffee... And Drinking Bleach?!

Should We Worry About Rihanna?!?