1992 was a bad year for the royal family. Very bad. So bad that the Queen made an uncharacteristically personal statement in a Nov. 24 speech marking her 40th year as the monarch. “1992 is not a year on which I shall look back with undiluted pleasure. In the words of one of my more sympathetic correspondents, it has turned out to be an ‘Annus Horribilis,’” she said.

The phrase was said to her by Sir Edward Ford, her former assistant private secretary, to describe the very tumultuous events of that year. And they were many. Most significantly, they forced the intensely private Queen to confront very personal revelations about her children and to realize the limitations of royal propriety in modern society.

“I think it was a very important year in the queen’s life,” royal reporter Robert Jobson told CNN in 2002. “I think it was the year that she realized and the people realized that the royal family was not really a family that one should look up to in moral terms.” 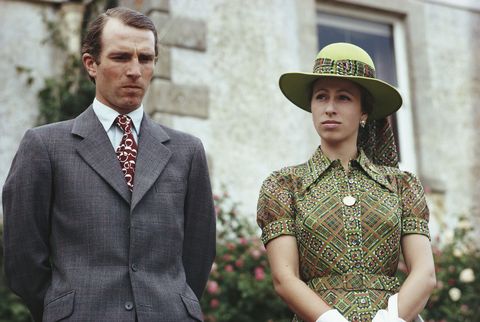 The string of bad fortune kicked off early in the year, when Prince Andrew and his wife Sarah Ferguson announced that they would divorce. The couple had married in a lavish 1986 wedding and were the parents of two young daughters. Their breakup was swiftly followed by the divorce of Princess Anne, Andrew’s sister, after an 18 year marriage to Captain Mark Philipps. (She was remarried to Sir Timothy Laurence before the end of the year.) Given the widely-known rockiness of Prince Charles and Princess Diana’s relationship, it was likely clear to the Queen that the odds were that all three of her married children would be divorced.

Then came the scandals. First, the Sunday Mirror ran paparazzi photos of the newly single Sarah Ferguson having her toes sucked by American businessman John Bryan. The story brought the family much ridicule and showed them in a new light, one that was very unpleasant for them. Next up, The Sun introduced the world to “Squidgy,” the pet name that gin heir James Gibney had used for Diana in a phone call that was taped. In the call, which took place on New Year’s Eve, 1989, Gibney expressed romantic affection for Diana. 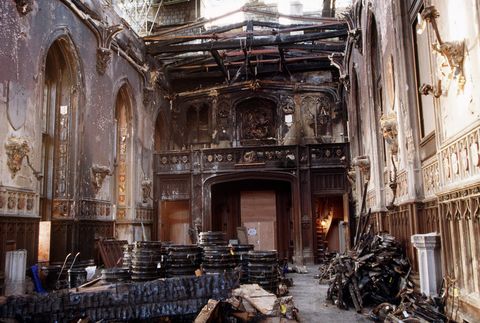 And finally, on Nov. 20, a fire. After a flame reached a curtain at Windsor Castle’s Queen Victoria’s Private Chapel, the building quickly caught on fire. The blaze was fought for 15 hours by 225 firefighters. It consumed 115 rooms and cost £36.5 million to repair. Among the most significant damage was the collapse of St. George’s Hall, a 14th century state room The bulk of the home’s priceless art collection, including works by Michelangelo, da Vinci and Van Dyck, was salvaged.

“I sometimes wonder how future generations will judge the events of this tumultuous year. I dare say that history will take a slightly more moderate view than that of some contemporary commentators. Distance is well-known to lend enchantment, even to the less attractive views. After all, it has the inestimable advantage of hindsight,” said in her much-quoted address. “But it can also lend an extra dimension to judgement, giving it a leavening of moderation and compassion—even of wisdom—that is sometimes lacking in the reactions of those whose task it is in life to offer instant opinions on all things great and small.”

Adrienne Gaffney is an associate editor at ELLE who previously worked at WSJ Magazine and Vanity Fair.

All About Cara Delevingne’s Girlfriend, Minke

Hailey Bieber Just Convinced Me to Try This “Dated” Boot