“With ‘Beasts of 42nd Street’, Preston Fassel has proven himself as one of our most powerful upcoming voices in horror literature.”
– Rebekah McKendry, PhD 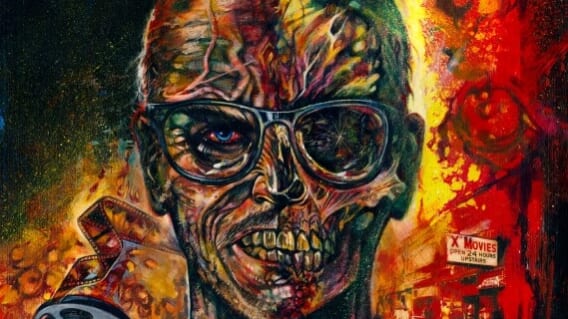 Beasts of 42nd Street, the highly controversial novel once considered “unpublishable” for its “upsetting tone and content,” has found a home at Cemetery Dance.

Set against the backdrop of 1970s Times Square and described as “a horror neo-noir that’s equal parts Taxi Driver and Hellraiser,” Beasts follows junkie theater projectionist Andy Lew as he attempts to prevent a mysterious- and possibly cursed- film reel from falling into the hands of a corrupt cop, a washed-up actor, and a Satanic cult, all of whom wish to possess it for their own nefarious reasons.

Preston Fassel’s follow-up to his critically acclaimed and award-winning Our Lady of the Inferno, Beasts was originally slated for publication in 2020 before his then-publisher went out of business. Says Fassel, “After the success of Our Lady I was given carte blanche to write whatever kind of book I wanted. And what I wanted was a return to the provocative, subversive, 1980s-style horror I came of age reading. Something that has a message but which is confrontational in conveying that message, something very Jack Ketchum, Clive Barker, early Joe Lansdale.” Although Beasts received glowing early reviews, Fassel discovered finding a new publisher was an “almost impossible” task.

“Two established horror authors set me up on meetings with their agents. I submitted to dozens of presses, dozens of agents. I had some very eye-opening conversations about the current state of publishing and what’s considered marketable and desirable,” said Fassel. And the across-the-board response was basically, ‘This is amazing and I won’t touch it with a ten-foot pole.’ It was the tone people found upsetting. So… I guess I did my job too well.”

“Why did I take a chance on Beasts of 42nd Street, especially as the very new paperback and ebook editor at Cemetery Dance Publications? The answer’s quite simple. In many ways, my vision for Cemetery Dance’s new paperback and ebook line isn’t necessarily startling or avant-garde. I simply want to offer the horror community varied and diverse works of horror, for readers of all tastes. Like the old Leisure Fiction horror line, which offered Brian Smith’s extreme horror, right alongside Gary A. Braunbeck’s mythic and existential horror, along with Jeff Strand’s horror comedy, Mary Sangiovanni’s cosmic horror, and Mort Castle’s literary, elevated horror. I’m not necessarily looking for subgenres in particular, nor am I averse to particular sub-genres. What I’m looking for are compelling characters with compelling stories. And Andy Lew is compelling. So is his story. As awful, and tawdry, and sometimes downright revolting as Andy and his story is…he and his story are compelling. I simply couldn’t stop reading it (even when I sometimes wanted to!) and that right there is what I want to define Cemetery Dance’s paperback and ebook line – compelling fiction you simply can’t stop reading, even if you kind of want to. Japanese filmmaker Akira Kurosawa is famously quoted as saying that the ‘role of the artist is not to look away.’

That’s what Preston does with this novel; he refuses to look away, and in doing so, he doesn’t allow the reader to look away, either. That makes for powerful story-telling right there, and I’m sure this book is going to have a helluva impact because of it.”

The book features hand-painted cover art by Justin T. Coons, who worked with Fassel to develop a unique image that would evoke 1970s exploitation film posters.

Beasts of 42nd Street will be released March 2023. It can be preordered right now before being available anywhere books are sold.

Fassel is repped by YRG Partners.

Everything to Know About 2022 Movies

What Is A Nepo Baby — and Why Are They So Easy To Dislike?