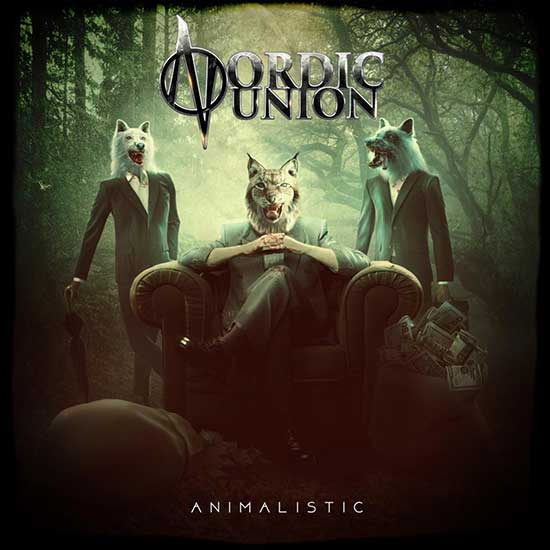 “ANIMALISTIC” DUE ON AUGUST 5, 2022 VIA FRONTIERS MUSIC SRL

‘IN EVERY WAKING HOUR’ SINGLE & VIDEO OUT TODAY

Nordic Union, the ongoing musical collaboration between legendary Danish rock singer Ronnie Atkins (Pretty Maids) and prolific Swedish songwriter and producer Erik Martensson (Eclipse, W.E.T.), have announced their third album, “Animalistic” will be released on August 5, 2022. Today, the band has released the first single and video from the album, ‘In Every Waking Hour’. Watch HERE: youtu.be/iK-SnqXK-EM

As has been well documented at this point, Atkins was recently given a stage four cancer diagnosis, but rather than sit at home and sulk, the legendary frontman has thrown himself into creating more music. March 2021 saw the release of his solo album, “One Shot”, which was followed almost one year to the day later in March 2022 by another solo album, “Make It Count”. Not satisfied with resting on his laurels, Atkins partnered up with Martensson in late 2021 and early 2022 to work on Nordic Union’s third album, “Animalistic”.

Martensson is coming off the heels of two successful 2021 releases, the fourth album, “Retransmission” from W.E.T. and his main band Eclipse’s most successful album to date, “Wired”, which charted in various countries around the world.

Fans of previous Nordic Union’s album will find nothing but pure melodic hard rock joy to soak in on this third opus. Martensson, on an absolute creative, and commercial, winning streak with the most recent Eclipse albums, wrote the bulk of the album with contributions from Atkins and Miqael Persson, and also produced, mixed, and mastered the album. The results are nothing short of inspired and delightful. A true testament to the skills and talent of both Atkins and Martensson.

The partnership between the two musicians started in 2015, when Frontiers President and Head of A&R, Serafino Perugino had the idea to bring the two together to create some uncompromising Scandinavian melodic hard rock. Martensson worked on some demos and sent them off to Atkins for him to hear. The enthusiastic reaction from Atkins sparked a brand new musical alliance that culminated in Nordic Union’s self-titled debut album, which was released in January 2016. Musically, the duo presented a hybrid of the more melodic aspects of Pretty Maids’ sound mixed with elements of Eclipse, Talisman, and W.E.T., while still possessing their own identity.

Following requests from fans for a follow up to the debut, the two musicians decided to give Nordic Union another shot, so after a few months of production, “Second Coming” was finished and unleashed in October 2018. Every aspect of the album screamed QUALITY. The songwriting was of the highest standards, the musicianship faultless, and the production top notch, crisp and clear as a bell. Atkins deftly demonstrated throughout the album that he knows how to use his voice effectively at any given point in a song. Heavy riffs, soaring vocals, thumping beats, and a grand ballad…this album had it all and flowed perfectly with songs that are memorable, rocking, and of course, melodic.

Come August 5, 2022, fans can one again expect to be floored by another gem from Nordic Union!

2. In Every Waking Hour

Weather in Iceland Is No Match For This Fashion Editor