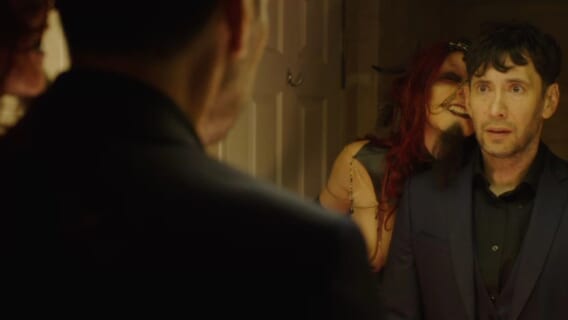 The majority of the first act of On the Edge consists of Peter (Aramis Sartorio) being restrained and horribly tortured by Mistress Satana (Jen Soska) after she abruptly ends the kinky sex games he had originally met with her for and instead takes him hostage. While these scenes were undeniably brutal, it was never made clear what exactly Peter did to deserve being tortured in such a way. So we really won’t know whether to be on his side or Satana’s.

Sure, Peter was clearly being unfaithful to his wife (Sylvia Soska) by meeting with Satana in the first place. But, that hardly justifies him literally almost losing his manhood. Although the torture scenes were largely bloodless (barely a single drop of blood was shown throughout the entire film), they will still be enough to make even hardcore viewers wince.

It goes without saying that audiences will be conflicted about whose side to be on. But things become even stranger in the second act when supernatural elements come into play. Satana appears to take the form of a demonic entity and begins to speak in a heavily modified demon voice as she begins lecturing Peter about the nature of the Devil within the Bible and other religious texts. It’s always great to learn new things from movies, so maybe we should thank Satana for the history lesson. But most viewers will probably be too confused by this point to know what to think.

And things then get even stranger when Peter then starts reliving moments from his past, although it was not made clear why he was being made to revisit these exact periods from his life. It should probably be mentioned that Peter was forced to drink a suspicious cocktail, so everything could just be happening in his head. Either way, viewers were still clearly supposed to interpret these scenes in their own way, which will no doubt lead to some entertaining theories among audience members.

The Soskas are clearly animal lovers, so their pet dog named Princess Diana and their snake named Cary Grant both made appearances. But whether they were supposed to actually be real or figments of Peter’s imagination is also left intentionally vague. Not much of the second act made sense. But it was still pretty sweet to see Jen Soska cradling her beloved snake onscreen. If you think about it hard enough, you could probably come up with symbolic reasons for the two animals showing up (the snake could represent the Devil from the Garden of Eden). However, it seems like the Soskas just really wanted their pets to be in the movie.

Animals aside, the other humans in the hotel also made some noteworthy appearances throughout On the Edge. The staff of the hotel seems to be aware of Peter’s torture, so their nonchalant reaction to his suffering is either laughable or downright disturbing.

The two central performers also gave On the Edge everything they had. The way Sartorio screams and cries really will make you believe that a rope was yanking on his crown jewels. At the same time, Jen Soska was brilliantly chilling as the domineering and merciless Satana. You would easily think of her as the Devil even before the supernatural elements kick in. Although the script was hard to decipher, the central performances will still keep you invested.

The script did not make a whole lot of sense, but the dedicated performances of Aramis Sartorio and Jen Soska and the different ways to interpret the events of the plot will probably keep viewers invested in On the Edge.