Sparks definitely flew in Thursday’s fall finale of Grey’s Anatomy. As an electrical storm delivered jolt after jolt to Seattle, Grey Sloan’s doctors were, ahem, charged with stitching back together the injured, all while bracing for the shock about which ABC’s promos had warned us. What was it? Read on, and we’ll discuss.

‘YOU WILL SEE GNARLY INJURIES’ | As “Thunderstruck” began, Meredith sent an email to her Grey Sloan colleagues announcing that she was leaving. How was Nick taking the news? They weren’t talking about it, Mer informed Amelia and Maggie. Lucas and Simone turned up their chemistry to 11. (Sue me — I already love them). And Link reminded Jo that women don’t just need abortions during nice weather, so she still had to go to work at the clinic. Unfortunately, once she arrived, she learned that bureaucracy had brought the wheels of progress to a halt, and the clinic couldn’t open yet. Elsewhere, annoyed that Lucas had yet to tell his fellow residents that they are not sleeping together, Amelia hauled him in front of his classmates and forced him to confess that he’s a Shepherd. “We are not now and have never been having sex,” she clarified. Er, “with each other.” Though the interns feared that Mer’s departure would mean the end of the residency program, Nick assured them that that was not the case — they, not any one surgeon, were the program.

Shortly, into the E.R. came Jonathan, the TV reporter whose helicopter had been struck by lightning on Station 19, leaving him in such bad shape that he had to be transported to the hospital in the extracted chair from the chopper. When the patient apologized to wife Paola for resenting the fact that she’d wanted him to give up his dream of being a war correspondent for her, a light bulb seemed to go on over Teddy’s head. Was Owen about to get freed from the doghouse? After Teddy and Owen reported to Paola that Jonathan was going to pull through, Mika told Altman that watching her in action had restored her faith that she could be anything. Teddy was a “badass boss lady surgeon, and I want to be you when I grow up.” 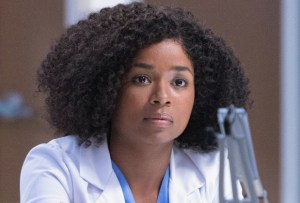 As Mer got autographs for her kids from a children’s book author named Tessa who had pancreatitis, Mer passed on obtaining one for herself — she already had the writer’s Jane Hancock from when she was a youngster. (Tessa was a Seattle legend, doncha know?) Before scrubbing in on Tessa’s whipple procedure, Simone asked Lucas if he felt better now that his deep, dark secret was out. Not so much better as different, he replied. (Of course, the point of the scene was really how well-prepared for the whipple she was. That, and them going from flirty to flirtier.) Ahead of the surgery, Nick gave Lucas a pep talk and assured him that he was good enough to make a name for himself. In the O.R., Nick encouraged Lucas, Mer was more cautious. She decided that Adams was too pooped to perform and replaced him with Simone. And that was just the beginning of the drama in that O.R. 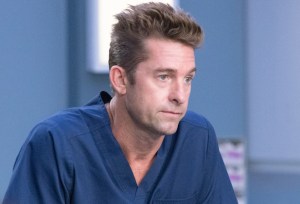 ‘WHEN SHE LEAVES, THIS PLACE WILL FEEL IT’ | When Richard approached Nick to ask whether he, along with Mer, would be leaving, her boyfriend admitted that he didn’t know. He struggled with figuring out how to answer questions with her. “She’s worth it,” Richard told him. Was she, though? Mer hadn’t even told Nick that Lucas was a Shepherd. When the couple argued/talked at last, Nick marveled at the position in which she’d put him. He didn’t even know how to fight for them and hated the idea of deserting his class of residents. In other developments, Jo, pitching in in the pit, gave Levi a hard time about his little bit of power having gone to his head. Jules delighted in outsmarting Blue when he asked for a consult. Later, they bonded, revealing a whole lot more about their pasts than one ordinarily would with just a one-night stand.

At Mer’s, Winston showed up to help Maggie pack for her sister — and to ruin her plan to avoid him and any discussion of his changing specialties. As far as he was concerned, though, the decision was made. He was going to take part in Grey Sloan’s vascular surgery fellowship. “If we keep working together, we’re not gonna make it. I love cardio,” Winston said, “but I love you more.” This was not the answer that Maggie wanted. She didn’t know if she respected it, even. While Winston absorbed that blow, the house was struck by lightning! Shortly, back at Grey Sloan, Bailey received a call from Ben, and Richard interrupted Nick and Mer’s operation on Tessa to tell Grey that there was a fire at her house. Off she went, to find her home in flames but the kids OK. At day’s end, Jo, Bailey and Carina were at last able to open the clinic (which was named for Miranda’s late mom, Elena). In the locker room, Simone reported to Lucas that Tessa was OK. But all he wanted to do was beat himself up over his failing in the O.R. As they argued, he impulsively kissed her, but she couldn’t go there. Um, why? Curiouser and curiouser. And at Mer’s, at least saved from the blaze were her and Derek’s Post-It’d vows.

So, what did you think of the fall finale of Grey’s Anatomy? Grade it below, then hit the comments.

7 Burning Questions for the Second Half of ‘Yellowstone’ Season 5

Chelsea Handler Said She Didn’t Know She Was On Ozempic

OFFICIAL TRAILER & POSTER : FIRENADO – From the makers of WINNIE THE POOH : BLOOD & HONEY