The brutal, bloody finale of Pretty Little Liars: Original Sin offers plenty of opportunities for gasps, but even amid the dramatic twists and turns, it’s a much quieter moment that’s sure to get those jaws dropping to the floor.

It comes towards the end of the finale, long after “A” gets unmasked and (temporarily) hospitalized. Tabby asks Imogen about the couple chosen to adopt her baby, and she says… well, this: “They seem pretty perfect, actually. They’re been wanting to have a baby for a while. I think they’re both writers and one owns a bookshop. Their names are Aria and Ezra.” Gasp.

As far as Easter eggs go, it’s a pretty big one. And the fact that Imogen says Aria and Ezra are “open to staying in touch about the baby’s life” gives us hope that we may one day see Ian Harding and Lucy Hale reprise their iconic roles. (You know, assuming Hale doesn’t show up as Katy Keene first.)

So, how did this full-circle event come to pass? We can apparently thank Katie Avery, the same writer responsible for getting Caleb’s name on that pill bottle. She recalled a Perfectionists-era tweet from the official Pretty Little Liars account that contained a “leaked” text exchange between Aria and Alison DiLaurentis in which Aria confirms that she and Ezra adopted a baby girl. 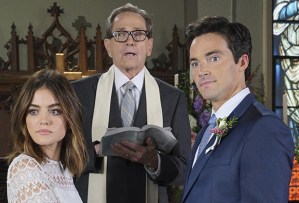 “When Katie pitched it, we were definitely like, ‘Wait that didn’t happen on the show,’” executive producer Roberto Aguirre-Sacasa tells TVLine. “She was like, ‘Yeah, it happened on social media.’ We were like, ‘OK, I think we can get away with it?’ She was very specific about it, and it was a great pitch.”

Adds fellow EP Lindsay Calhoon Bring: “Katie was so in the lore of the fandom that she remembered those text messages. Obviously the original show’s creator [Marlene King] and those writers, know what is canon for their show. I think we took canon to be what we saw in the TV series. Being a fan of the show, I understood that Aria and Ezra really wanted a baby, so we thought it would be a really beautiful, unexpected connection at the end of the show if Imogen’s baby ends up being adopted by Aria and Ezra and is loved and moves to Rosewood. I love when fans and creators create canon through Instagram posts and texts messages. I’m obsessed with it.”

Given that The Perfectionists took place several years after the original Pretty Little Liars, which itself featured a significant time jump in its later seasons, it’s entirely possible that these timelines sync up, and that Imogen’s baby totally makes sense as the one Aria and Alison were texting about. If it’s not, we don’t want to know. The only thing worse than having to do math is finding out you did it wrong.

What did you think of Aria and Ezra adopting Imogen’s baby? Are you hoping for a cameo, should Original Sin be renewed for additional seasons? Grade the finale and season below, then drop a comment with your thoughts.

Enola Holmes Is Back In Sequel First Look Images

Celebrities Who Had Ghost Sex Encounters

Celebrities Who Had Ghost Sex Encounters

Three Friends’ Past Catches Up in Thriller ‘Never Forgotten’ Trailer