Apple TV+’s thriller Shining Girls is eerie. It’s twisty. And now that it has premiered… it’s a lot easier to talk about it without a) giving things away and b) sounding absolutely bonkers.

The story is based on, though is not a beat-for-beat recreation of, Lauren Beukes’ 2013 novel. The premise: Elisabeth Moss (The Handmaid’s Tale) plays Kirby Mizrachi, who survived a terrible assault years ago and who now works as an archivist at a Chicago newspaper. When a recent murder bears some similarity to her own attack, she becomes intimately involved in the search for the killer.

Kirby is joined in the investigation by Dan Velazquez (played by Narcos‘ Wagner Moura), but they’re hardly a dream team. Their problems run the gamut from practical (Dan’s troubled life bleeds into their work) to the metaphysical (Kirby’s reality shifts without warning or reason, and does so so often that she secretly keeps a journal to remember details like her pet’s name and her apartment number).

See what we mean? 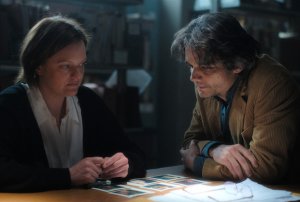 The first three episodes, which Apple TV+ released Friday, also introduce Harper (played by TURN: Washington’s Spies‘ Jamie Bell), a menacing character who appears in both 1964 and the series’ present, yet seems not to have aged a day in between.

If you’re scratching your head, no worries: TVLine spoke with Moss about what is revealed — and what new questions arise — in the series’ opening hours. In the video above, she sheds light on how Kirby has been coping since her monstrous attack and why Dan, whom she barely knows at the start of the show, becomes the one person she thinks might believe the fantastical things that are happening to her.

Press PLAY on the video above to hear Moss’ thoughts, then hit the comments with yours!

23 Actors Who Weren't The First Choice For Their Role

‘Avatar: The Way of Water’ Trailer

AirPods Sale on Amazon As Low as $79

Ranking ‘The Walking Dead’ Villains, From Worst to Best

PSA: These ASOS Party Shoes Are Pretty Much Perfect