Support to Come From Light the Torch, Nekrogoblikon and Crobot

CD Version Of “The New Dark Ages” Out Today!

Graphic Novel “GWAR In the Duoverse of Absurdity” Out Today on Z2 Comics! 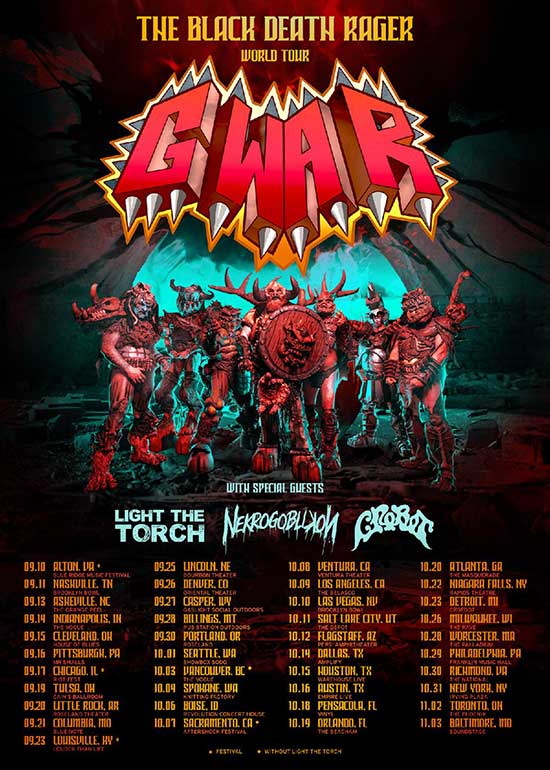 2022 has been the year of GWAR, and there are no signs of that stopping anytime soon.  Today your Lords and Masters are pleased to announce the fall leg of “The Black Death Rager World Tour,” in support of their critically acclaimed masterwork “The New Dark Ages,” which is out on CD and digital via the band’s label Pit Records.  The tour starts off September 10th, with an appearance at the Blue Ridge Rock Fest in Alton, VA and runs through November 3rd in Baltimore, MD.   A complete list of dates can be found below.  Support on the tour will be provided by Light the Torch, Nekrogoblikon and Crobot. Tickets go on sale today at Noon Eastern!  Get them HERE.

“Long ago, GWAR broke the frame of what a rock concert can be. We’ve pushed the envelope of live performance for decades, but this time around, we wanted to do something different. This is the first GWAR show conceived to go along with a graphic novel and an album, all working together as one massive hunk of hot steaming shock rock performance ART! A can’t-miss cavalcade of chaos, a trash culture trilogy, a shocking extravaganza that will leave you utterly spent, soaking wet, and bawling uncontrollably. We’ve got the coolest storyline, unbelievable new characters, more blood, gore, and gags than ever before. Come, unload your worries, human scum, and let GWAR transport you to the Duoverse of absurdity just in time for the NEW DARK AGE!”

“The Black Death Rager World Tour” With Light The Torch, Nekrogoblikon and Crobot

#Without Light the Torch

The New Dark Ages chronicles GWAR’s adventures in the Duoverse, where the band rediscovers old powers such as Blóthar’s terrifying Berserker Mode, and encounter new allies, such as the murderous maven known as The Cutter. Along the way, they battle the living monuments of a lost cause and armies of undead soldiers who Rise Again to fight a New Civil War.  The album is out today on CD and digital! 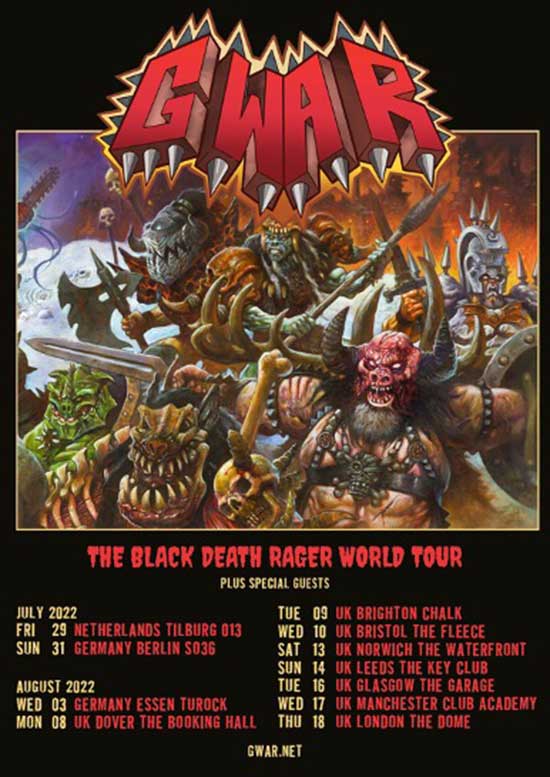 The album and the show concepts are tied to a companion graphic novel, “GWAR In the Duoverse of Absurdity,” which was also released by Z2 Comics today! In the graphic novel the band are sucked off into an alternate universe to do battle with their evil twins and the specter of rogue technology.  The album and graphic novel can be ordered HERE.

Prior to the Fall tour, GWAR are headed overseas on the European leg of “The Black Death Rager World Tour.”  This run kicks off July 29th in Tilburg, NL and runs through August 18th in London, UK.

Who Is Adar? What We Know so Far