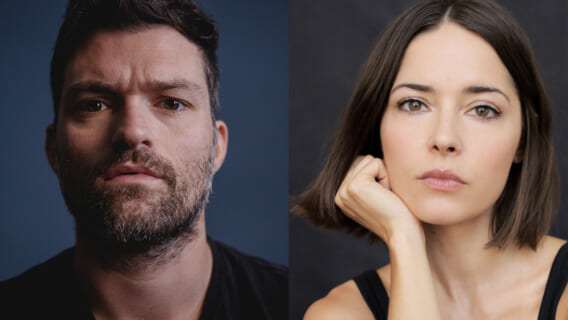 With a story inspired by visual art and Greek mythology, A Wounded Fawn from director Travis Stevens is unlike anything you’ll see in the genre this year. Out now on Shudder, this psychedelic odyssey into intimate horror features a tight cast of spooky favorites.

I had the chance to interview stars Sarah Lind and Josh Ruben ahead of the title’s Tribeca Film Festival World Premiere in June. Check out our conversation below.

In A Wounded Fawn, a local museum curator (Lind) is dipping her toe back into the dating pool, only to be targeted by a charming serial killer (Ruben). When a fateful romantic getaway between the two becomes a tense game of cat and mouse, both must confront the madness within him.

Dread Central: How would you describe A Wounded Fawn?

Josh Ruben: A small man screams a lot and gets chased around a cabin by ghosts-

Josh Ruben: I think that’s what my answer is, too.

Dread Central: How do you approach playing a serial killer?

Josh Ruben: I tried to, I think, do a couple of different things. I was trying to play warm and also weirdly charming … and hopefully sexy, as someone who never considered myself really honed into that quality.

Dread Central: Is that part of his M.O.?

Josh Ruben: I think it’s his sensuality… or at least, I wanted that to be a challenge for me as someone who plays goofballs and goblins and has made a whole career out of that. What would it be like if I actually just tried to switch on that part of myself? And then everything else is just the action. Rather than playing it, it’s just ‘here’s a charming person who’s a little bit of a show-off and a little bit of snob, but ultimately keeping the anchor of the romanticism.’

Dread Central: What’s going on with Meredith at the start of this film?

Sarah Lind: I think she had been through hell, been through her trials and came through them and resolved them. And then when she was ready for, and had space for this [date], she went on it. Interestingly, Meredith’s arc is alluded to more than it’s actually experienced or witnessed in the film.

Sometimes, until you learn a lesson, you keep reliving the same mistakes, but I think she had actually resolved it to some extent. I mean, obviously, she ended up in this terrible situation, but I don’t think it was her, not foolhardiness, but not having learned her lesson prior.

DC: Was improv part of the process, or was this fully scripted?

JR: Fully scripted. Any “improv” on my end just came from taking longer moments and playing with how much space to fill up. ‘What if I just threw a swing out here just to see what it would do?’ Just part of this whole thing, the fun of it, especially not being a filmmaker, in this sense, just being performers. What can you play with, still within the realm of the formula Travis has set up in the community and environment?

DC: If you could put anything on the soundtrack that’s not there, what would you put?

JR: Oh really? Well, just from my perception, there’s hardcore violence, it’s a psychedelic ride. Buoyancy can contrast gore, so something like a sugary pop singer’s tune would be really fun.

DC: What is the horror movie that traumatized you the most growing up?

SL: And then Evil Dead, to this day, I understand that it’s fun… but it terrorized me.

DC: The first one?

SL: The first one, yeah. I saw it in the theater for the first time in Vancouver and went by myself because none of my friends liked scary movies. I brought a blanket as an adult, and I was just terrified. I’m an easy scare. I’m a really easy scare.

JR: Poltergeist gets under your skin.

SL: It was everything. The tree. Weirdly him tearing himself apart when the worms … that didn’t really scare me, but the clown, the closet, the TV, and even Zelda Rubenstein.

JR: I have another Zelda moment, which is the sister in Pet Sematary. That’s another scary Zelda. That changed my life for the better, I guess. But at the moment, total peepee screams. I think it might have been a tie between that and the violence of seeing Kathy Bates mallet James’ little toesies [in Misery].

DC: What’s your relationship with the supernatural? Have you ever had any experiences?

SL: I lived in a house that was haunted with my family, and none of us talked about it to each other until we moved out.

DC: What stopped you?

SL: It was like the lot was cursed. We’d plant stuff, it would die immediately. Things would disappear. I heard voices. One time I was going through the kitchen, heard a noise, turned around, and all the chairs were thrown across the kitchen.

A Wounded Fawn is available to stream now on Shudder.

'Filmmaking is a very risk-averse business'

I Practically Collect Zara Blazers—Here Are 25 I Love