‘Next Exit’ Is A Melancholy, Yet Bumpy, Road Trip Worth Taking [Tribeca 2022 Review] 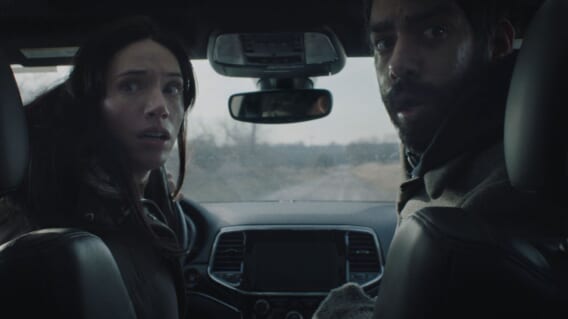 Next Exit is Pulse by way of Nick Hornby. Funny meet-cutes merge with omnipresent spirits in Mali Elfman’s genre hybrid. The best way to conceptualize Next Exit is an indie road trip where the more explicit genre elements happen on the periphery, as if the two main players, Rose (Katie Parker) and Teddy (a fantastic Rahul Kohli) are merely passing through the latest Blumhouse release. Admittedly, Next Exit never portends to be anything other than a metaphysical reflection with horror shadings, though not all of its elevated indie sensibilities land. In other words, it might have benefited from a bit more paranormal weirdness.

Next Exit employs the time-tested expository tactic of letting news feeds fill in the contextual blanks. Karen Gillan, relegated in a bit role to televised appearances, is Dr. Stevensen, a scientist spearheading the Life Beyond institute, a company that facilitates what amounts to medically assisted suicide once the world writ large learns that life definitively persists after death. Those same reports detail mass suicides, homicides, and considerable shifts in global life once this knowledge is revealed. Though director Elfman, who also wrote the script, skimps on inimitable visual details to set the world of Next Exit apart. While the movie looks great, employing lens flares, hushed palettes, and intimate blocking to imbue its many small moments with mood, the world itself looks too much like ours for the burgeoning awareness of the supernatural to land. Other than a few roadside markers, reports of mass suicide and death exist in the imagination, never manifesting during the lengthy road trip Rose and Teddy take en route to the institute.

Breezy, frequently funny chemistry between Kohli and Parker helps to compensate for visual sameness. Kohli’s Teddy is the perfect, blasé foil to Parker’s more self-serious, “I need to go die in San Francisco” mentality. Which, really, is what most of what Next Exit amounts to. While Rose sees the occasional ghost, it’s clear from their introductions that both Teddy and Rose are deeply unhappy for deeply different reasons. Rather than grapple with that, they see the institute—and death—as an easy out, an opportunity to start over in a world beyond ours.

Specificity is the adhesive a movie like this needs, and at times, Next Exit gestures broadly at tropes and arcs seen too many times before. Last year’s Silent Night found the distinct, singular humanity in a forthcoming apocalypse, though Next Exit only occasionally achieves that same kind of resonance. Too often, the core thematic beats unravel into sermonizing, platitudes about the innate value of life and overcoming past demons not directed with any serious purpose toward either Teddy’s or Rose’s specific circumstances. They’re pat revelations that do a considerable disservice to a pair of fantastic performances that, even in weaker moments, elevate archetypes—sarcastic misanthrope and goofy sidekick—into lived-in characters.

As Next Exit nears its conclusion, there are some inspired visual and narrative beats that do subvert expectations, particularly toward the end. As more is unspooled about who both Teddy and Rose are, the more poignant beats land more resoundingly than they did early on. While it never has quite as much to say as clear progenitors Pulse and The Leftovers, there’s enough that resonates, in part because of its smattering of horror elements.

Next Exit perhaps got off an exit too early. Abounding with promise, it amounts to pretty good, rather than revelatory. There’s promise in Elfman’s voice, and both Kohli and Parker are guaranteed wins. But it never takes its unique premise quite far enough. Its most compelling ideas are frustratingly absent or rendered with such vague universality, it could belong to any movie, not Next Exit specifically. Still, there’s enough humor and heart to make Next Exit a trip worth taking. A ghostly coming-of-age road trip, the sum of its parts luckily transcends the entire thing put together.

Next Exit arrives at some profound revelations, though along the way, it loses some its distinct identity

Explore the Many NYC Locations of James Gray’s ‘Armageddon Time’