[Editor’s note: The following contains spoilers for House of the Dragon, Season 1 Episode 1, “The Heirs of the Dragon.”]

Game of Thrones was a show that, as its title indicated, had a lot to do with the battle for power. But the king we meet in the House of the Dragon pilot, King Viserys Targaryen, has a complicated relationship with his place as ruler. “There’s a part of Viserys that wishes Rhaenys would have been named and not him,” star Paddy Considine says. “I don’t think it’s a responsibility, I think he was happy to get it, but then there’s a sense of ‘Oh god, why me?’ I think he’s a guy who’s damned, no matter what, by his duty. As he says to Rhaenyra, ‘[The Iron Throne] is the most dangerous seat in the room.’”

House of the Dragon might take place within the very well-established world of Westeros, but being a prequel set long before the events of its sister show means establishing a whole new cast of characters. Thus, the series begins with a prologue revealing that Viserys was picked by the old king Jaehaerys to sit on the Iron Throne (Michael Carter) instead of Rhaenys (Eve Best), who was closer to Jaehaerys in the order of succession but suffered from the tragic condition of being female.

Ten years into his reign, as House of the Dragon shows, Viserys is a decent king — but maybe not the right one for this time. Speaking to a small roundtable of reporters during a recent press day for the show, Considine reveals that he sees Viserys as “a scholar and a man of good temperament. He’s coming off the reign of Jaehaerys, it’s a peaceful time in the kingdoms, it’s a time without war and I think he’s trying to uphold that. But I don’t think he has the right source of qualities to be a ruler, as such.”

As Considine clarifies, “That’s not to say that he’s a weak man… I think he’s been given a massive responsibility and that’s something that he’s conflicted about, because I think he believes so much in these things and himself believes that he’s a dreamer in some ways but it backfires on him and that causes a lot of doubt in him and his decision making and whether or not he’s doing the correct thing.”

In Episode 1, “The Heirs of the Dragon,” Viserys is eagerly awaiting the birth of a child he’s convinced will be a son after having had a prophetic dream about it. In one of the more difficult-to-watch sequences in the franchise’s history, his dream is proven to be true, but the baby as well as Viserys’s beloved Queen Aemma (Sian Brooke) fail to survive the birth. Making it even more tragic a moment for the series is that Viserys gets asked to approve an experimental-for-the-times procedure that’s basically a medieval Cesarean section, one which basically ensures the mother won’t survive.

Considine’s memory of shooting the sequence was a bit vague due to the passing of time: “It’s been over a year since we shot that scene… it was a very very long day and it was very emotional. I think if he could have saved anybody, he would’ve saved Aemma.”

Also, he adds, “I don’t think he recovers from Aemma’s death, ever. That’s part of his downfall, really — he spirals in his life because he lost the love of his life. There’s a lot of weight on Viserys.” 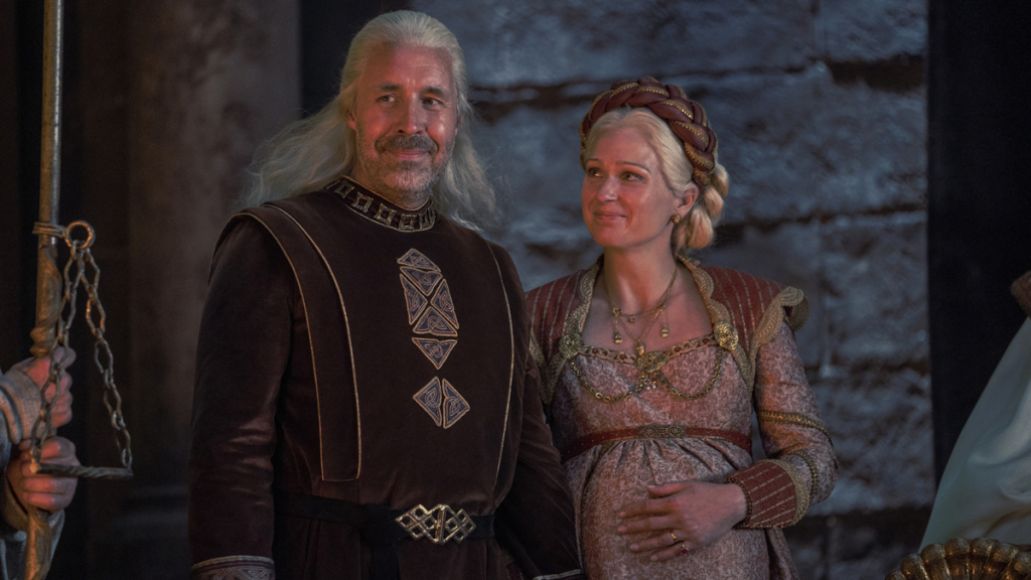 House of the Dragon (HBO)

Everything New on Prime Video in September

Everything New on Prime Video in September

Actress Milly Alcock From House Of The Dragon: 'I Was In Astonishment And Despair'

What Hailey Bieber Revealed About Selena Gomez, Justin Bieber, and Any Cheating on Call Her Daddy